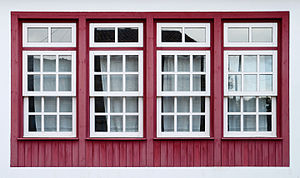 A sash window or hung sash window is made of one or more movable panels, or "sashes",[upper-alpha 1] that form a frame to hold panes of glass, which are often separated from other panes (or "lights") by narrow muntins.[1] Although any window with this style of glazing is technically a sash, the term is used almost exclusively to refer to windows where the glazed panels are opened by sliding vertically, or horizontally in a style known as a "Yorkshire light", sliding sash, or sash and case (so called because the weights are concealed in a box case). The oldest surviving examples of sash windows were installed in England in the 1670s, for example at Ham House.[2][3] The invention of the sash window is sometimes credited, without conclusive evidence, to Robert Hooke. Others see the sash window as a Dutch invention.[4]

The sash window is often found in Georgian and Victorian houses, and the classic arrangement has three panes across by two up on each of two sash, giving a six over six panel window, although this is by no means a fixed rule. Innumerable late Victorian and Edwardian suburban houses were built in England using standard sash window units approximately 4 feet (1.2 m) in width, but older, hand-made units could be of any size, as the image illustrates. 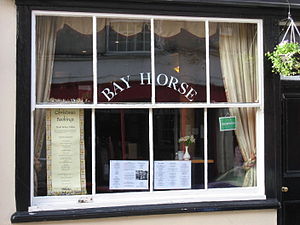 To facilitate operation, the weight of the glazed panel is usually balanced by a heavy steel, lead, or cast iron sash weight or counter-weight concealed within the window frame. The sash weight is connected to the window by a braided cotton sash cord, or chain, that runs over a pulley at the top of the frame, although spring balances are sometimes used. Breakage of this cord requires disassembly, or destruction, of the trim pieces to gain access for repair.

Sash windows may be fitted with simplex hinges, which allow the window to be locked into hinges on one side while the counterbalance on the other side is detached, allowing the window to be opened for escape or cleaning.

The name "hung sash window" is more usual in the United States, and typically refers to a double-hung window with two sash that can move up and down in the window frame. These windows are commonly found in older buildings in warmer climates as they are easy to clean and promote airflow.[5]

A single hung window has two sash but normally the top sash is fixed and only the bottom sash slides.[6] Triple and quadruple hung windows are used for tall openings, common in New England churches.

Construction is usually of softwood, and these sash were traditionally only single-glazed. Modern double-glazed sash windows are now available, but depending on their aesthetic style, can be frowned upon. Traditionally styled double-glazed sash windows will often attempt to mimic the original appearance through the use of non-functional muntins or "glazing bars", which are applied to the surface of the glazing, and give the appearance that the sash is made up of several smaller panes, whereas in reality, each sash consists of only one, large, double glazed unit.

Traditional problems with solid wooden sash windows include rot, swelling or distortion of the woodwork or rattling in the wind (due to shrinkage of the wood). It is also a common problem for inexperienced painters (or experienced painters without any sash-painting experience) to paint the sash stuck. The sliding mechanism makes sash windows more vulnerable to these problems than traditional casement windows. Sash windows are relatively high maintenance, but offer advantages in return (style, aesthetics, abides by laws (relating to older houses and buildings), natural resources etc.), however well-maintained sash windows should last generations without needing parts replaced. It is also possible to clean all the glass from within the building by sliding the two panes to different positions.

In recent years, uPVC sash windows have become available. These aim to replicate the aesthetic qualities of traditional sash windows, while overcoming many of the shortcomings—especially regular maintenance and painting, and energy inefficiency.[citation needed]

A significant advantage of sash windows is that they provide efficient cooling of interiors during warm weather. Opening both the top and bottom of a sash window by equal amounts allows warm air at the top of the room to escape,[7] thus drawing relatively cool air from outside into the room through the bottom opening.