The Satellaview system was developed and released by Nintendo to receive signals broadcast from satellite TV station WOWOW's satellite radio subsidiary, St.GIGA. St.GIGA was responsible for file server management, maintenance, and vocalization for "SoundLink" games. Nintendo data broadcasts were given a fixed time slot known as the Super Famicom Hour (スーパーファミコンアワー?) during which scrambled Satellaview-related data was streamed via radio waves to be unscrambled by St.GIGA's "BS digital hi-vision TV" (ＢＳデジタルハイビジョンテレビ, BS Dejitaru HaiBijon Terebi?). As a subscription-based station for ambient and New Age music, St.GIGA listeners were already equipped with "BS tuners" prior to St.GIGA's contract with Nintendo. Satellaview owners who lacked a "BS tuner" had to purchase one separately from St.GIGA at a price of ¥33,000,[5] as well as sign up for Nintendo's and St.GIGA's monthly joint membership fees.[6] Alternatively, users could rent "BS tuners" from St.GIGA for a 6-month period at a price of ¥5,400.[5] Even at this premium price, St.GIGA reported subscriptions peaking at 116,378 households by March 1997, and dropping to around 46,000 by June 2001.[7]

The name Satellaview is a portmanteau of "Satellite" and "view". "BS" stands for Broadcast Satellite, a common name of one of the direct broadcast satellites in Japan.[8] 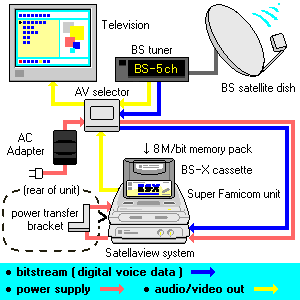 Diagram showing how the Satellaview interacts with St.GIGA's reception and decoding devices and the television to deliver game data to the player

The basic Satellaview system comprises this:

The deluxe system contained all the above as well as a rewritable 8-Megabit Memory Pak. The Satellaview base unit contained around 512 KB of memory of its own; however, the deluxe Memory Pak was required for larger games and to allow the player to have multiple saved games. Memory Paks were sold separately as well, and today these Memory Paks serve as a primary source of data retrieval for members of the subculture of collectors and enthusiasts devoted to the restoration of these games via emulation.

The male and female BS-X avatars.

Bundled with the Satellaview came a slotted application cartridge with the title BS-X : The Story of The Town Whose Name Was Stolen (BS-X それは名前を盗まれた街の物語, BS-X: Sore wa Namae o Nusumareta Machi no Monogatari?). The application on this cartridge took the form of a game; however, its actual purpose was to serve as an interactive menu system for the console subunit. On start-up the player would enter a name, selected either a male or female character avatar, and then move the avatar around a virtual town. Houses and shops in the town served as download locations where the player could directly download games, particular game data, or digital magazines. The download would write game data into temporary memory locations which would remain until the player downloaded a new game to take its place.[11]

Apart from downloads, players could also travel to in-game locations such as the Wall Newspaper Co. (かべ新聞社, kabe shinbunsha?) to read brief text-only postcard-like messages from St.GIGA and Nintendo that announced contest winners, revealed future games and future programming schedule details, and served to raise awareness for celebrity events relating to SoundLink Magazine performers' off-Satellaview activities. Furthermore, the avatar was equipped with an inventory and game currency which could be spent on various in-game items such as telephone cards, vehicle tickets, fish bait, and shoes that would enable the player to dash rather than walk everywhere. While the BS-X application cartridge had none of the challenges typically associated with games, it featured a plot of sorts and thus can be considered a video game in a narratalogical sense.

A series of downloadable games including Dezaemon (BS Version): BS-X Shooting (デザエモンＢＳ版 ＢＳ－Ｘシューティング?) (April 22, 1996), SatellaWalker (サテラウォーカー?) (June 29, 1997), and SatellaWalker 2 (サテラウォーカー２?) (Feb. 15, 1998) were also released featuring plotlines set in the Town Whose Name Has Been Stolen. The SatellaWalker SoundLink game series notably involved extended RPG-like adventures with the avatar as the main character and the two Satellaview mascots, Satebô[12] (サテぼう?) (an anthropomorphic satellite) and Parabô[12] (パラぼう?) (an anthropomorphic parabolic satellite dish) providing the main supporting roles. Designed by Noriko Kitamura (北村典子?) with help from Masaru Nishida (西田 勝?),[13] these two characters featured heavily in all materials relating to the Satellaview appearing not only on the BS-X cassette, but also in the Satellaview manual and brochures, various print ads and magazines, and on certificates of achievement awarded with prizes for various events (see below for an example of a prize certificate bearing the likeness of Parabô).

Broadcast material followed a regular schedule that allowed Satellaview owners to plan their daily schedules in order to catch the games they wished to play. This regular schedule was changed, however, a number of times throughout the lifetime of the Satellaview to make allowances for such things as increased or decreased SoundLink voice actor availability, customer demands for SatellaGuide support, and reduced support in the later years. Below is a table displaying the transmission schedule for new content:

Rebroadcasts of "Regular broadcast" games were transmitted throughout the lifetime of the Satellaview. As such, non-SoundLink reruns were available for players at some times simultaneously with new SatellaGuide broadcasts between 1998 and 2000.

Satellaview Games were broadcast episodically in weekly or sometimes daily installments, usually with a total of four parts. As new episodes were added, players would either be confronted with new levels and maps or their original gameworld would become further unlocked allowing exploration of new areas in-game. Game items and points often carried over from one week to the next either automatically (requiring that the player use the same data cartridge) or through the use of passwords and codes.

Games could be downloaded from within the BS-X BIOS, a game city known as BS-X The Story of The Town Whose Name Was Stolen that was used as an interface. After turning the Satellaview on with the BS-X BIOS cartridge inserted, a player could roam the city and could visit a number of BS-X buildings. Visiting these buildings would allow the player to download and play the game or episode that the building contained. The contents of the buildings changed from hour to hour, making it helpful for players who wished to play a specific game to look up the correct time and location in various Super Famicom Hour (スーパーファミコンアワー?) tables published online by Nintendo and in hard copy by magazines such as Satellaview Communications Magazine (サテラビュー通信, Saterabyu Tsuushin?). 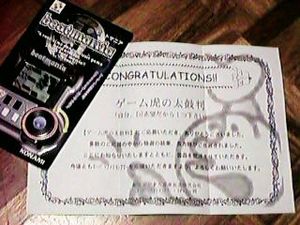 The system required a subscription to the St.GIGA satellite radio station, and during a limited time (between 11:00AM and 2:00AM), users could download games and receive news about the gaming world (as well as see some ads), and save it on a memory card that plugged into the Satellaview. It was also possible to play quizzes, and also at the end of each game users receive a score readout. By submitting their game or quiz high scores, their score would be recorded, and if they scored high enough they might get a free gift, such as a telephone card or flash-cart.

A number of games featured streaming voice data known as "SoundLink" (サウンドリンク?) (this term came into use in 1996. Prior to this such voice data was referred to as "Voice Link" (音声連動, Onsei Rendou?)). In games featuring SoundLink data, one or more voice-actors would be used to guide players through the game and give helpful hints and advice. More complex games made use of multiple voice-actors to provide an audio drama narrating the plot and exhorting the player to hurry from goal to goal before the time ran out. Because of the inclusion of a SoundLink soundtrack, the clock, and other live elements, these games could not be played at any time like some of the other Satellaview games, but only during the set hours, much like a radio play. SoundLink broadcasts also included SoundLink Magazines that acted more like traditional radio broadcasts rather than games. Vocal SoundLink data was broadcast to Satellaview owners in a scrambled format that could be unscrambled by the BS Tuner unit for a monthly 600 yen fee.[18]

Apart from full games and magazine broadcasts, Satellaview players were also given access to a number of data downloads that could be used in conjunction with various memory-pak-compatible application cartridges (also known as slotted cartridges). These cartridges were structurally identical to the BS-X cartridge - featuring a slot in the top into which could be inserted an 8M memory pak of the kind that the Satellaview employed. Their function was similar to the Nintendo Power cartridge but instead of holding entire games, they held game data.

The data downloaded typically took the form of additional content such as new playable characters, new levels, or other new perks that could be accessed in-game. As such, data downloads functioned as patches and expansions. Examples included additional horses and racetracks for Derby Stallion '96, additional maps and characters for RPG Tsukūru 2, and an additional magazine accessible in game in Itoi Shigesato no Bass Tsuri No. 1. Occasionally data downloads would also be available that were not intended for use with application cartridges but instead could be accessed from the BS-X cartridge. An example of this is the Chrono Trigger Music Library data broadcast.

In March 1996, three different separately-sold 8M memory paks were produced already containing prerecorded data of this sort. These special 8M paks bore all new decals and contained EPROMs that could not be overwritten by new download data from the Satellaview.

All downloadable broadcasts that were neither Games nor Data files fell into the category of Digital Magazines (デジタルマガジン?). The Satellaview's digital magazine broadcasts could also be further subdivided into three distinct styles of magazine:

In addition to downloadable magazine files, the BS-X cartridge also featured a constantly updated portion of the BIOS named the Kabe Shinbunsha (かべ新聞社?) that was devoted to receiving brief text-only messages from St.GIGA and Nintendo regarding future plans, upcoming contests and games, and for announcing contest winners' names. Although this material was not specifically selected by the player for download and was not included on "Super Famicom Hour" schedules, it has been described as a digital postcard or fax in the same vein as the Magazines.