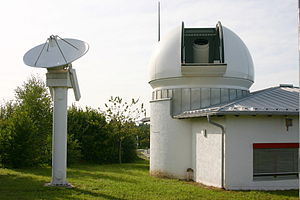 In satellite laser ranging (SLR) a global network of observation stations measures the round trip time of flight of ultrashort pulses of light to satellites equipped with retroreflectors. This provides instantaneous range measurements of millimeter level precision which can be accumulated to provide accurate measurement of orbits and a host of important scientific data.

Satellite laser ranging is a proven geodetic technique with significant potential for important contributions to scientific studies of the Earth/Atmosphere/Oceans system. It is the most accurate technique currently available to determine the geocentric position of an Earth satellite, allowing for the precise calibration of radar altimeters and separation of long-term instrumentation drift from secular changes in ocean topography.

Its ability to measure the variations over time in the Earth’s gravity field and to monitor motion of the station network with respect to the geocenter, together with the capability to monitor vertical motion in an absolute system, makes it unique for modeling and evaluating long-term climate change by:

SLR provides a unique capability for verification of the predictions of the theory of general relativity, such as the frame-dragging effect.

SLR stations form an important part of the international network of space geodetic observatories, which include VLBI, GPS, DORIS and PRARE systems. On several critical missions, SLR has provided failsafe redundancy when other radiometric tracking systems have failed.

Laser ranging to a near-Earth satellite was first carried out by NASA in 1964 with the launch of the Beacon-B satellite. Since that time, ranging precision, spurred by scientific requirements, has improved by a factor of a thousand from a few metres to a few millimetres, and more satellites equipped with retroreflectors have been launched.

Several sets of retroreflectors were installed on the Earth's moon as part of the American Apollo and Soviet Lunokhod space programs. These retroreflectors are also ranged on a regular basis, providing a highly accurate measurement of the dynamics of the Earth/Moon system.

During the subsequent decades, the global satellite laser ranging network has evolved into a powerful source of data for studies of the solid Earth and its ocean and atmospheric systems. In addition, SLR provides precise orbit determination for spaceborne radar altimetre missions mapping the ocean surface (which are used to model global ocean circulation), for mapping volumetric changes in continental ice masses, and for land topography. It provides a means for subnanosecond global time transfer, and a basis for special tests of the Theory of General Relativity.

The International Laser Ranging Service was formed in 1998 by the global SLR community to enhance geophysical and geodetic research activities, replacing the previous CSTG Satellite and Laser Ranging Subcommission.

SLR data has provided the standard, highly accurate, long wavelength gravity field reference model which supports all precision orbit determination and provides the basis for studying temporal gravitational variations due to mass redistribution. The height of the geoid has been determined to less than ten centimeters at long wavelengths less than 1500 km.

SLR provides mm/year accurate determinations of tectonic drift station motion on a global scale in a geocentric reference frame. Combined with gravity models and decadal changes in Earth rotation, these results contribute to modeling of convection in the Earth’s mantle by providing constraints on related Earth interior processes. The velocity of the fiducial station in Hawaii is 70 mm/year and closely matches the rate of the background geophysical model.