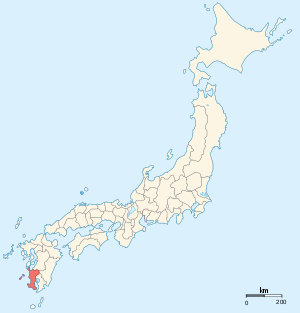 Satsuma Province (薩摩国, Satsuma-no Kuni?) was an old province of Japan that is now the western half of Kagoshima Prefecture on the island of Kyūshū.[1] Its abbreviation is Sasshū (薩州).

Satsuma's provincial capital was Satsumasendai. During the Sengoku Period, Satsuma was a fief of the Shimazu daimyo, who ruled much of southern Kyūshū from their castle at Kagoshima city.

In 1871, with the abolition of feudal domains and the establishment of prefectures after the Meiji Restoration, the provinces of Satsuma and Ōsumi were combined to eventually establish Kagoshima Prefecture.

Satsuma was one of the main provinces that rose in opposition to the Tokugawa Shogunate in the mid 19th century. Because of this, the oligarchy that came into power after the "Meiji Restoration" of 1868 had a strong representation from the Satsuma province, with leaders such as Ōkubo Toshimichi and Saigō Takamori taking up key government positions.

Satsuma is well known for its production of sweet potatoes, known in Japan as 薩摩芋 (satsuma-imo or "Satsuma potato"). On the other hand, Satsuma mandarins (known as mikan in Japan) do not specifically originate from Satsuma but were imported into the West through this province in the Meiji era.