Forest Glen is one of the 77 community areas of Chicago, Illinois, located in the city's Northwest Side. The community area is considered affluent.

Edgebrook borders the neighborhood of Sauganash. Edgebrook was once part of the Sauganash land tract and was annexed by the city of Chicago in 1889. To the north of Edgebrook lie Wildwood and then North Edgebrook. Frequently the three communities together are referred to as Edgebrook.

Edgebrook is home to the Billy Caldwell Golf Course and the Edgebrook Golf Course, both operated by the Cook County Forest Preserves, and Edgebrook Elementary School, which has consistently ranked highly among the many Chicago Public Schools in terms of standardized test performance. Edgebrook School's mascot is the Eagle.

The #84-Peterson and #85A-North Central CTA bus routes are largely relied upon for transit south and east into the city, and the routes originate in Edgebrook. The Milwaukee District/North Line also has a stop in Edgebrook.

South Edgebrook is actually called Indian Woods. There are multiple signs in the neighborhood that have been in place for many decades.

The community is triangular in shape and is bordered by Lehigh Avenue, Caldwell Avenue (Route 14), Touhy Avenue, and Lightfoot Avenue. The Edgebrook train station faces Wildwood at the intersection of Devon, Lehigh, and Caldwell Avenues.

North Edgebrook is the northern section of the Wildwood Neighborhood.

Sauganash was once part of the Sauganash land tract (Caldwell's Reserve) and was annexed by the city of Chicago in 1889. This neighborhood is named after Billy Caldwell, also known as Sauganash (meaning "English speaking"). Born to a Mohawk mother and an Irish father, William Caldwell, Sr., a Captain of the British Butler Rangers, he became a leader of the Potawotomi. The “Treaty Elm" which stood until the 1930s was originally used in the first and second government surveys of the reserve. Sauganash negotiated with the United States on behalf of the United Nations of the Chippewa, Ottawa and Potawotomi. In return for his services, the US gave him 1600 acres on the Chicago River.

Today the neighborhood is home to three churches: Sauganash Community Church, a non-denominational Protestant church; Bride of Christ Church; and Queen of All Saints, a Roman Catholic Basilica. The Sauganash residential neighborhood has many distinctive homes. It also had large tracts of prairie land until the mid-1950s.

The Sauganash neighborhood is bordered by Devon Avenue to the north, Bryn Mawr Avenue to the south, the Edens Expressway (Interstate 94) to the west, and the Valley Line bike trail to the east. Devon Avenue marks the northern boundary of the city limits of Chicago at this point. The suburb of Lincolnwood begins north of Devon Avenue.

The Neighborhood of Sauganash Park lies east of the Valley Line trail.

A community of about 550 residences on the Northwest side of the city of Chicago is often referred to as "Chicago's Finest Community." It is one of the oldest neighborhoods in Chicago. The first European American to settle there was Captain William Hazelton of the 1st Cavalry Division; he built the Glen's first barn at what is now Lawler and Foster.

The Forest Glen neighborhood is bordered by the Chicago River to the north, Foster Avenue to the south, Cicero Avenue to the east and Metra Milwaukee District North line to the west. 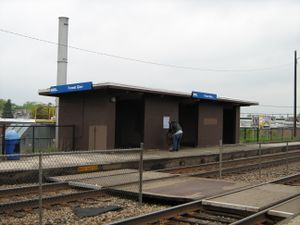 The waiting platform at the Forest Glen station.