Savenay (Savenneg in Breton) is a commune in the Loire-Atlantique department in western France and the Pays de la Loire region. Located on the Sillon de Bretagne (a mountain range defining the southern part of Brittany), north of the Loire, its landscape is characterized by the hillside overlooking the marshes of the Loire. Under the Old Regime, it was part of the province of Brittany.

Located halfway between the cities of Nantes and St. Nazaire, it is well served by transport networks. The town is in the west of the Loire-Atlantic, just north of the Loire estuary, 40 km north-west of Nantes and 28 km east of Saint-Nazaire. Other towns close by are La Chapelle-Launay at 2.7 km, Prinquiau at 5.6 km, Bouée at 6 km, Lavau-sur-Loire at 7.4 km, Campbon at 10.4 km, Malville at 11.1 km, Quilly at 13.3 km.

Savenay climate is, like the rest of the Loire-Atlantique, a temperate oceanic climate. This climate is heavily influenced by the estuary of the Loire. Winters are mild (min 3 ° C / Max 10 ° C) and summers are mild (12 ° C min / max 24 ° C). Snowfall is rare. Rain is frequent (113 days per year of precipitation), with annual precipitation averaging about 743 mm, however rainfall is quite variable from one year to another. The average sunshine is 1826 hours per year. The presence of the Sillon de Bretagne, however, causes some local variations in the climate, with marsh areas generally colder than the rest of the town. This area is also often shrouded by fog in the winter.

In 2006, there were 366 companies in the area (excluding agriculture). The overwhelming majority (87%) were in trade and services. 92% of them were establishments with fewer than 10 employees. These establishments accounted for 1,691 salaried positions with an average of 4.62 per employee. In the agricultural sector, 44 farms make use of the 1562 hectares of farmland (in 2000) with cattle ranching dominating the agricultural activity.

The Battle of Savenay on 23 December 1793 was the last, decisive battle of the Revolt in the Vendée during the French Revolution. In this battle the forces of the royalist counter-revolutionaries were irrevocably shattered. 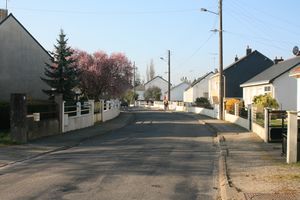 Example of housing in Savenay