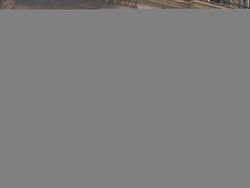 In Spain, a savings bank (Spanish: caja de ahorros or informally just caja, Catalan: caixa d'estalvis, Galician: caixa de aforros, informally 'caixa', Basque: aurrezki kutxa) is a financial institution which specializes in accepting savings deposits and granting loans. Their original aim was to create the habit of thrift amongst the very poor but they have evolved to compete with and rival commercial banks. 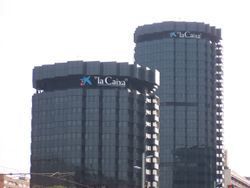 Towers of La Caixa in Barcelona.

European countries which adopted the Scottish savings bank model early on were those in which traditional Protestant values of self-help and the ideas of Jeremy Bentham and Thomas Malthus were particularly influential. Such was not the case in Portugal and Spain where savings banks started rather late (1836 and 1839, respectively) and followed the French model (established in 1818).

Regulation introduced in 1835 was the first to authorise the establishment of savings banks in Spain. This piece of legislation allowed the establishment of independent non-profit-orientated institutions which had to be financed by own resources. However, it was not clear how individual institutions would access these resources although there were loose references to the expectation that capital would be raised as the well-off supplied financial resources as charitable donations.

The Spanish government clearly displayed a preference for initial investment to come from the private sector while individual institutions would provide for some form of guarantee to secure funds held in deposit. Financially, however, the model of 1835 was very weak. Hence, in 1839 a new piece of legislation introduced the "French model" where individual savings banks were linked with a "Mount of Piety".

Unlike the Scottish savings banks, French-style savings banks created an initial fund to cover set-up costs and unexpected losses through donations and setting up a charity. After this the banks became autonomous with a governing board of six to 20 principals (working pro bono) holding responsibility for the strategic direction and overall affairs of the banks. Both in Portugal and Spain the most common source of the set-up fund was the local Mount of Piety. These Mounts of Piety (a literal translation from "Montes de Piedad") were early modern charitable institutions where advances were made against some kind of collateral in pawn (usually, jewellery or clothes). Consequently, Spanish savings banks would accept low-value and low-volume savings in deposit and, in turn, place these funds in the ‘Mounts of Piety’ in order to make small loans to the more underprivileged classes.

The Act of 1880 had clear objectives for the running of savings banks. At the same time, there were a number of areas which lacked precision in the new introduced regulation. However, it was the lack of precision in a number of areas which was to allow the growth and development of savings banks in Spain. In particular, freedom (i.e. lack of detailed regulation) regarding investment policies resulted in diversification and growth of assets at a greater rate than counterparts elsewhere in Europe. Indeed, from the time the Act of 1880 was published until the end of the 19th century, the number of entities doubled from 26 in 1880 to 66 in 1905, while the sum of cash and assets held as deposit increased by four percent from 12 per cent of total savings in Spain in 1880 to 16 percent in 1905.

Alongside the savings banks, in 1890 and following German ideas to promote agriculture, co-operative banks ("caja rurales") emerged in rural areas. Most of these banks were established in the countryside under the auspices of the syndicalist, co-operativist movements and the Catholic church. However, these intermediaries grew in size until after 1920. Their impact, number, and asset size were always dwarfed when compared with the achievements of the savings banks and as a result, the "cajas rurales" were eventually absorbed by the savings banks.

Performance in the first half of the 20th Century

Between 1870 and 1900 the financial strength of savings banks increased significantly. During this period, the pawn and emergency loan operations of the Mount of Piety were unable to absorb all deposits made at the savings bank. Unlike savings banks in other European countries, Spanish savings banks were not required to purchase government debt with excess resources. Instead, savings banks began making short-term advances and issuing mortgages directly to the public. Initially they issued short-term loans using public and industrial goods in stock as collateral.

Between 1862 and 1867, 40 per cent of the amount of the loans was granted with the clothing securities and the remaining 60 per cent was secured by stock. Diversification continued and by the outbreak of World War I, Spanish savings banks were readily issuing mortgages directly to retail customers. The Mortgage Act of 4 June 1908 contributed to the development of this phenomenon as it pioneered exemption from having to pay different forms of capital gains and corporation’s tax for mortgages issued by the Mount of Piety.

Most early-established savings banks had located in the biggest urban centres, and grew in financial strength through retained surpluses. By the turn of the century most assets were held in the savings banks located in seaports and industrial cities. Between 1900 and 1925 the number of Spanish savings banks tripled to 150 banks, although no major change in regulation policy or the banks' business portfolio had taken place.

Between 1900 and 1914 the Spanish banking sector experienced a sharp increase in its levels of activity. Some banks also observed increased efficiency and enhanced competitiveness. Assets of private commercial banks grew significantly due to both the repatriation of capital due to the colonial crisis and World War I, in which Spain remained neutral. These circumstances favoured the geographical expansion of the regional private commercial banks based in Madrid and the Basque Country throughout Spain.

During the 1920s assets in savings banks started to abandon their charitable nature and gradually turned into broader financial intermediation institutions. Growth was limited because competitive pressure to find new opportunities within the private commercial banking sector resulted in a policy of expansion of the geographic scope of retail branches networks and diversification of sources of business. These strategies brought the competitive challenge of private commercial banks to markets being serviced by savings banks.

Individual savings banks enhanced their profile within their local communities as greater asset size allowed them to increase the funding of social welfare- and agricultural projects (Obra Social, a practice that is nowadays part of their corporate social responsibility). However, a new approach to how people saved and to the working environment of savings banks came about as a result of legislation enacted in 1926, 1929, and 1933 during the dictatorship of General Primo de Rivera, a period in which the economic policy was marked by an authoritarian corporatism, and the Spanish Republic brought.

These regulatory changes brought to an end the savings banks' charitable nature. They also turned their profits into the main source of funds (and therefore to support the "Obra Social"). Regulatory innovations put to an end the broad discretion that the directors of savings banks previously had and established specific and detailed guidelines whose use (and abuse) grew during the dictatorship of General Francisco Franco. 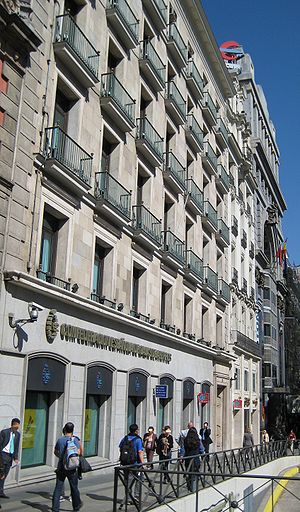 The Franco regime (1939–1975) reaffirmed the pre-eminence of private commercial banks within the Spanish financial system and introduced regulation that handicapped traditional savings banks. The supervision of the savings banks was transferred from the Ministry of Interior to the Bank of Spain.

The first episode of regulatory change for the savings banks saw increased regulation, and the overwhelming majority of new savings banks that were established between 1939 and 1977 were set up by local and central governments (with some notable exceptions like the co-operativist Caja Laboral). The Franco regime continued implementing a practice developed during the 1920s called the principle of territoriality, meaning that the business of each savings bank was restricted to its home province.

This principle remained an informal arrangement until it was enacted into law in 1964. At the same time, the increasing asset base of the savings banks prompted the Finance Ministry to start regulating the sources and applications of their funds. As a result, the Finance Ministry directed a growing proportion of the assets of savings banks to finance public debentures and private banks' short-term liabilities, with the added result that the policy significantly reduced funds available for agricultural projects and other traditional lending activities.

The second episode of regulatory change for the savings banks dates to the last stage of the Franco regime, when attempts were made to ease the regulatory burden on Spanish savings banks (particularly in 1962 and 1964). Nonetheless, until 1974 the savings banks remained outside the Spanish clearinghouse system and had access to only a restricted business portfolio.

However, under the Fuentes Quintana Reform (1977) the competitive environments for savings and private banks started to converge. The reform gave savings banks strong incentives to modernise their infrastructure and develop new skills. In 1977, for example, the Bank of Spain authorised the first automated teller machine for the savings banks and by 1996, their combined network had 14,169 machines, the biggest network in Spain and the third largest in the world.

Collapse of the cajas

In the aftermath of the global financial crisis, the Spanish real estate market collapsed, taking Spain into its very own financial crisis.[1] Out of the 45 cajas in existence at the start of the crisis in 2007, only two survived in their initial form; the rest were either taken over by other banks or by the government or forced to merge and taken over by the government, wiping out existing equity holders.[2]