From Infogalactic: the planetary knowledge core
Jump to: navigation, search
For other places with the same name, see Savona (disambiguation).
For The infantry division, see 55 Infantry Division Savona.

listen (help·info) (Ligurian: Sann-a [ˈsaŋːa] French: Savone) is a seaport and comune in the northern Italian region of Liguria, capital of the Province of Savona, in the Riviera di Ponente on the Mediterranean Sea.

Savona used to be one of the chief seats of the Italian iron industry, having iron-works and foundries, shipbuilding, railway workshops, engineering shops, and a brass foundry.

One of the most celebrated former inhabitants of Savona was the navigator Christopher Columbus, who farmed land in the area while chronicling his journeys. 'Columbus's house', a cottage situated in the Savona hills, lay between vegetable crops and fruit trees. It is one of several residences in Liguria associated with Columbus.

Inhabited in ancient times by Ligures tribes, it came under Roman influence in c. 180 BC, after the Punic wars in which the city had been allied to Carthage. At the fall of the Western Roman Empire, it passed under Lombard rule in 641 AD (being destroyed in the attack) after a short period as an Ostrogoth and then Byzantine possession. Later it recovered as county seat in the Carolingian Empire. In the 10th century its bishops were counts of Savona, but later the countship passed to the marquesses of Monferrato (981) and afterwards to the marquesses Del Vasto (1084).

After a long struggle against the Saracens, Savona acquired independence in the 11th century, becoming a free municipality allied with the Emperor. Savona was the center of religious culture (13th to 16th centuries) due to the work of two important monasteries: Dominican and Franciscan. Subsequently it fought against Genoa before being definitively conquered in 1528. The Genoese destroyed the upper town and buried the port. It then shared the fortunes of the Republic of Genoa until Napoleonic times. Between April and mid-May 1800, Austrian forces besieged the city while a small British naval force maintained a blockade; the fortress surrendered on 15 May. Subsequently Savona was annexed to the Kingdom of Sardinia-Piedmont (1815). eventually, it became part of unified Italy. 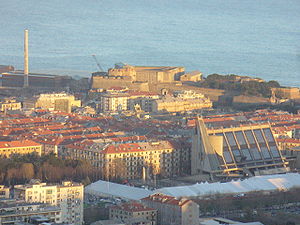 Panorama of Savona and Priamar fortress

Palaces and other places of interest

The town is situated 40 kilometres (25 miles) west of Genoa and circa 150 km (93 mi) (east) of Nice, in France, on the western Italian Riviera, between the Ligurian Sea and the Ligurian Alps.

Savona has a Mediterranean climate (Csa).

Savona is twinned with: