From Infogalactic: the planetary knowledge core
Jump to: navigation, search
This article is about the cutting tool. For other uses, see Saw (disambiguation).
"Sawblade" redirects here. For the EPs, see Sawblade (Isis EP) and Sawblade (Gangrene EP). For the plant, see Dyckia brevifolia.

A saw is a tool consisting of a tough blade, wire, or chain with a hard toothed edge. It is used to cut through material, most often wood. The cut is made by placing the toothed edge against the material and moving it forcefully forth and less forcefully back or continuously forward. This force may be applied by hand, or powered by steam, water, electricity or other power source. An abrasive saw has a powered circular blade designed to cut through metal. 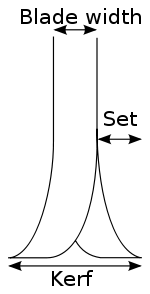 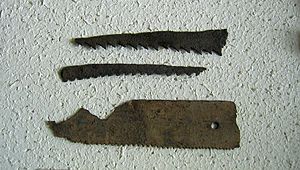 Saws were at first serrated materials such as flint, obsidian, sea shells and shark teeth.[2]

In ancient Egypt, open (unframed) saws made of copper are documented as early as the Early Dynastic Period, circa 3,100–2,686 BC.[3][page needed] Examples of saws used for cutting both wood and stone and as a tool for execution of people and models of saws have been found in many contexts throughout Egyptian history. Particularly useful are tomb wall illustrations of carpenters at work that show sizes and the use of different types. Egyptian saws were at first serrated, hardened copper which cut on both pull and push strokes. As the saw developed, teeth were raked to cut only on the pull stroke and set with the teeth projecting only on one side, rather than in the modern fashion with an alternating set. Saws were also made of bronze and later iron. In the Iron Age, frame saws were developed holding the thin blades in tension.[2] The earliest known sawmill is the Roman Hierapolis sawmill from the third century AD and was for sawing stone. 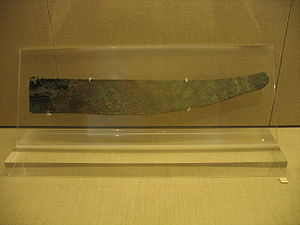 According to Chinese legend, the saw was invented by Lu Ban.[4] In Greek mythology, as recounted by Ovid,[5] Talos, the nephew of Daedalus, invented the saw. In archeological reality, saws date back to prehistory and most probably evolved from Neolithic stone or bone tools. "[T]he identities of the axe, adz, chisel, and saw were clearly established more than 4,000 years ago."[6]

Manufacture of saws by hand

Until at least the mid-19th century, saws were made laboriously by hand. The teeth were filed out individually, then "set" by striking alternate teeth with a hammer against a "stake" or small anvil. Due to risk of breaking teeth, beginners were given saw set pliers which set even more slowly.[7]

A pit saw was a two-man rip saw. In parts of early colonial North America, it was one of the principal tools used in shipyards and other industries where water-powered sawmills were not available. It was so-named because it was typically operated over a saw pit, either at ground level or on trestles across which logs that were to be cut into boards. The pit saw was "a strong steel cutting-plate, of great breadth, with large teeth, highly polished and thoroughly wrought, some eight or ten feet in length"[8] with either a handle on each end or a frame saw. A pit-saw was also sometimes known as a whipsaw.[9] It took 2-4 people to operate. A "pit-man" stood in the pit, a "top-man" stood outside the pit, and they worked together to make cuts, guide the saw, and raise it.[10] Pit-saw workers were among the most highly paid laborers in early colonial North America. 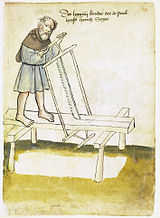 Hand saws typically have a relatively thick blade to make them stiff enough to cut through material. (The pull stroke also reduces the amount of stiffness required.) Thin-bladed handsaws are made stiff enough either by holding them in tension in a frame, or by backing them with steel or brass (on account of which the latter are called "back saws.") Some examples of hand saws are:

"Back saws," so called because they have a thinner blade backed with steel or brass to maintain rigidity, are a subset of hand saws. Back saws have different names depending on the length of the blade. Some examples are:

This particular circular saw, which cut wood into segments to fit a wood-burning kitchen stove, is displayed at the Cole Land Transportation Museum in Bangor, Maine.

Types of blades and blade cuts

Most blade teeth are made either of tool steel or carbide. Carbide is harder and holds a sharp edge much longer.

Band saw blade
A long band welded into a circle, with teeth on one side. Compared to a circular-saw blade, it produces less waste because it is thinner, dissipates heat better because it is longer (so there is more blade to do the cutting, and is usually run at a slower speed.
Crosscut
In woodworking, a cut made at (or close to) a right angle to the direction of the wood grain of the workpiece. A crosscut saw is used to make this type of cut.
Rip cut
In woodworking, a cut made parallel to the direction of the grain of the workpiece. A rip saw is used to make this type of cut.
Plytooth blade
A circular saw blade with many small teeth, designed for cutting plywood with minimal splintering.
Dado blade
A special type of circular saw blade used for making wide-grooved cuts in wood so that the edge of another piece of wood will fit into the groove to make a joint. Some dado blades can be adjusted to make different-width grooves. A "stacked" dado blade, consisting of chipper blades between two dado blades, can make different-width grooves by adding or removing chipper blades. An "adjustable" dado blade has a movable locking cam mechanism to adjust the degree to which the blade wobbles sideways, allowing continuously variable groove widths from the lower to upper design limits of the dado.
Strobe saw blade
A circular saw blade with special rakers/cutters to easily saw through green or uncured wood that tends to jam other kinds of saw blades.

There are several materials used in saws, with each of its own specifications.

Brass
Mostly used in back saws because of its low price and its flow characteristics, which make it relatively easy to cast. Brass contributes to the rigidity that is needed in back saws, which require less force to operate than other kinds of saws because of the pulling motion involved.
Steel
Used in almost every existing kind of saw. Because steel is cheap, easy to shape, and very strong, it has the right properties for most kind of saws.
Diamond
Fixed onto the saw blade's base to form diamond saw blades. As diamond is a superhard material, diamond saw blades can be used to cut hard brittle or abrasive materials, for example, stone, concrete, asphalt, bricks, ceramics, glass, semiconductor and gem stone. There are many methods used to fix the diamonds onto the blades' base and there are various kinds of diamond saw blades for different purposes. High speed steel (HSS): The whole saw blade is made of High Speed Steel (HSS). HSS saw blades are mainly used to cut steel, copper, aluminum and other metal materials. If high-strength steels (e.g., stainless steel) are to be cut, the blades made of cobalt HSS (e.g. M35, M42) should be used.
Tungsten carbide
Normally, there are two ways to use tungsten carbide to make saw blades:

Plainsawing: Lumber that will be used in structures is typically plainsawn (also called flatsawn), a method of dividing the log that produces the maximum yield of useful pieces and therefore the greatest economy.