In 1954 Israel's first special operations unit—Unit 101—was disbanded following the outcry provoked by the Qibya massacre. This left the IDF without a dedicated special-forces unit other than the Navy's Shayetet 13, a naval commando unit which could not fully replace Unit 101. In 1957 he (né Herling), a former yeshiva student and Palmach fighter, petitioned the IDF General Staff to create a unit that could be dispatched to enemy-held territory to carry out top secret intelligence-gathering missions. Arnan's idea (backed by David Ben-Gurion and Yitzhak Rabin) was to create a unit that would recruit only the best and the brightest of Israeli youth. Prospective fighters were to be hand-picked, being physically and intellectually the best soldiers available. Originally part of Aman's Unit 157, Sayeret Matkal began to operate independently a year later as the General Staff's special operations force,[2] modeled after the British Special Air Service. Members of the unit were trained by Bedouin trackers in order to obtain a better understanding of their adversaries.[3] Established a year after the formation of Israel's first helicopter squadron, the close co-operation between the two units allowed Sayeret Matkal to deploy longer and deeper inside Arab territory than its predecessor. Arnan's vision for Sayeret Matkal (of which he was the first commander) was of a unit that would carry out strategic intelligence-gathering and other operations; as such it would receive its missions only from the General Staff. Sayeret Matkal would also evaluate new weapons and doctrines that could influence the entire IDF.[4]

Due to the extensive training, planning and preparation that had to be undertaken before its missions, Sayeret Matkal ended up not seeing any action during the Six-Day War. It was however engaged extensively in the following War of Attrition. After 1967, with the rise of Palestinian political violence perpetrated by groups such as the Palestine Liberation Organization (PLO), Sayeret Matkal began developing the first hostage-rescue and counter-terrorism techniques in the world. Beginning with Operation Isotope, the unit carried out several high-profile operations that thrust it into the limelight as an "elite paratroopers" unit (Sayeret Matkal's existence was classified at the time). In 1972, before the Munich massacre, Sayeret Matkal's operatives were sent to West Germany to cooperate with German authorities and, if necessary, perform the hostage-rescue themselves. Their advice though, was not heeded. In the subsequent Operation Wrath of God, Sayeret Matkal struck the PLO in Beirut.[5]

The Yom Kippur War in 1973 brought a profound change to the unit. With Israel fighting on two fronts and the General Staff busy with managing the war, Sayeret Matkal found itself without missions to perform. Sayeret Matkal officers then split into two camps: those who believed that the unit should be kept in reserve and not be lightly sent to missions where it could endure heavy casualties, and those that wanted to go into action, even if that meant missions with little planning and more akin to a commando force than to the strategic-oriented Sayeret Matkal. The latter prevailed and Sayeret Matkal was tasked with operations on both fronts. After the war, Sayeret Matkal began developing plans for wartime in advance, so that when war came, the unit could go into action immediately, without waiting for the General Staff's orders and missions. A reserve company of Sayeret Matkal was also designated specifically for cooperation with the Israeli Air Force, shown by the war to be lacking. This would later evolve into Shaldag Unit.[6]

In 1974 Sayeret Matkal suffered a heavy blow when a failed rescue attempt resulted in the Ma'alot massacre. The debacle led to the creation of the Yamam to deal with domestic counter-terrorism/hostage-rescue missions, while Sayeret Matkal would focus on foreign counter-terrorism/hostage-rescue. Two years later came the most famous mission of the unit when it spearheaded Operation Entebbe to rescue hostages held in Uganda. The mission was a resounding success, although there were 4 hostages killed as well as the commander of the Unit, Lieutenant Colonel Yonatan Netanyahu.[7]

In Operation Thunderbolt, commonly known as Operation Entebbe, in which it rescued more than 100 Air France passengers hijacked and flown to Uganda by PFLP-EO terrorists,[8] while losing the assault element commander, Yonatan Netanyahu, and three hostages.[9]

Although a top-secret unit, Sayeret Matkal had tremendous influence on the IDF. It was the original developer of helicopter infiltration techniques in Israel. In addition, their extensive use of the Uzi led them to convince Israel Military Industries to produce an Uzi with a folding stock for increased accuracy while maintaining its small frame. 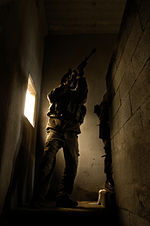 The unit was kept top-secret during its initial years. Fighters and commanders were selectively hand-picked, based on personal acquaintances. Since the 1970s, while still secretive, the unit opened to voluntary recruits. Twice a year it holds a notoriously grueling selection camp (Gibbush) for potential recruits lasting several sleepless days. The recruits are constantly monitored by doctors and psychologists. Those who make it through with a passing grade are admitted. During the 1990s, this selection practice was picked up by other IDF special forces (Sayeret). Former IDF Chief of Staff Dan Halutz planned to unify all such camps to prevent recruit burn-outs and medical injury by over-enthusiastic youths.[5]

Once admitted to the unit, recruits train for 18–19 months, with heavy emphasis on small arms, martial arts, navigation, camouflage, reconnaissance and other skills required for survival behind enemy lines. They must also complete the 120-kilometre (75 mi) Beret March in the final four days to receive their red beret.[5] The training regime consists of the following:

Although Sayeret Matkal has its own insignia, it is also one of the few units in the IDF whose soldiers are not allowed to wear it in public due to its classified nature. Ironically, this lack of insignia often leads to Sayeret Matkal operators being recognized as such, as the fact that Matkal troopers don't wear insignia is well-known.[10] 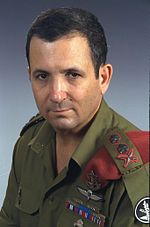 Sayeret Matkal veterans have gone on to achieve high positions in Israel's military and political echelons. Several have become IDF Generals and members of the Knesset. Ehud Barak's career is an example: a draftee in 1959, he later succeeded Unit 101 commando Lt. Meir Har-Zion in becoming Israel's most decorated soldier. While with Sayeret Matkal, Barak led operations Isotope in 1972 and Spring of Youth in 1973. He later advanced in his military career to become the IDF Chief of Staff between 1991 and 1995. In 1999 Ehud Barak became the 10th Prime Minister of Israel.[7]

There is a widely held misconception that former Israeli Major General and former Prime Minister Ariel Sharon served in Sayeret Matkal, though as a Major Sharon had founded the IDF's first special-forces unit (Unit 101) in 1953. When Unit 101 was merged into the Paratroopers Brigade in 1954, Sharon became brigade commander, but never served in Sayeret Matkal.