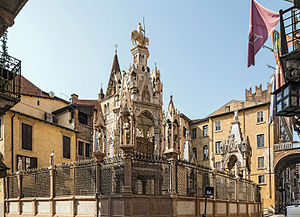 The Scaliger Tombs (Italian: Arche scaligere) is a group of five Gothic funerary monuments in Verona, Italy, celebrating the Scaliger family, who ruled in Verona from the 13th to the late 14th century.

The tombs are located in a court of the church of Santa Maria Antica, separated from the street by a wall with iron grilles. Built in Gothic style, they are a series of tombs, most of which are in the shape of a small temple and covered by a baldachin. According to the French historian Georges Duby, they are one of the most outstanding examples of Gothic art.

The tombs are placed within a wrought iron enclosure decorated with a stair motif, in reference to the Italian meaning of the name of the family, della Scala. The tombs are those of the following notable members of the Scaliger dynasty: