Part of the Scandinavian Airlines System Aktiebolag and headquartered at the SAS Frösundavik Office Building in Solna, Sweden, the airline operates 182 aircraft to 90 destinations. The airline's main hub is at Copenhagen-Kastrup Airport, with connections to over 50 cities in Europe. Stockholm-Arlanda Airport (with more than 30 European connections) and Oslo Airport, Gardermoen are the other major hubs.[2] Minor hubs also exist at Bergen Airport, Flesland, Gothenburg-Landvetter Airport, Stavanger Airport, Sola and Trondheim Airport, Værnes.

The airline was founded in 1946 as a consortium to pool the transatlantic operations of Svensk Interkontinental Lufttrafik, Det Norske Luftfartselskap and Det Danske Luftfartselskab. The consortium was extended to cover European and domestic cooperation two years later. In 1951, all the airlines were merged to create SAS.

SAS is one of the founding members of Star Alliance. 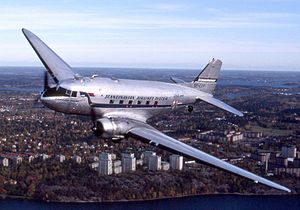 The airline was founded on 1 August 1946, when Svensk Interkontinental Lufttrafik AB (an airline owned by the Swedish Wallenberg family), Det Danske Luftfartselskab A/S and Det Norske Luftfartselskap AS (the flag carriers of Denmark and Norway) formed a partnership to handle the intercontinental air traffic of these three Scandinavian countries.[4] Operations started on 17 September 1946. In 1948 the Swedish flag carrier AB Aerotransport joined SAS and the companies coordinated European operations and finally merged to form the SAS Consortium in 1951. When established, the airline was divided between SAS Danmark (28.6%), SAS Norge (28.6%) and SAS Sverige (42.8%), all owned 50% by private investors and 50% by their governments.[citation needed]

In 1954 SAS was the first airline to start scheduled flights on a polar route. The DC-6B flew from Copenhagen to Los Angeles, California, United States with stops in Søndre Strømfjord (now Kangerlussuaq), Greenland, and Winnipeg, Manitoba, Canada. By summer 1956 frequency had increased to three flights per week. It was popular with Hollywood celebrities and film industry people, and the route turned out to be a publicity coup for SAS. Thanks to a tariff structure that allowed free transit to other European destinations via Copenhagen, this trans-polar route gained increasing popularity with American tourists throughout the 1950s. In 1957 SAS started a second polar route when a DC-7C flew from Copenhagen to Tokyo, Japan, via the Ted Stevens Anchorage International Airport. The flight via Alaska was a compromise solution since the Soviet Union would not allow SAS - and other air carriers - to fly across Siberia between Europe and Japan, while the airspace of the PR China was also closed.[citation needed] SAS publicized this service as "round-the-world service over the North Pole".[citation needed]

The company logo in the 1980s was made up of stripes in the colours of the flags of Denmark, Norway, and Sweden 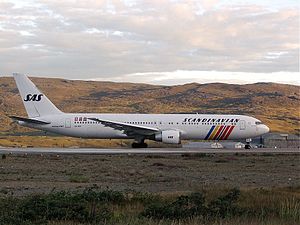 SAS gradually acquired control of the domestic markets in all three countries by acquiring full or partial control of local airlines, including Braathens and Widerøe in Norway, Linjeflyg and Skyways Express in Sweden and Cimber Air in Denmark. In 1989, SAS acquired 18.4% of Texas Air Corporation, parent company of Continental Airlines, in a bid to form a global alliance. This stake was later sold. During the 1990s, SAS also bought a 20% stake in British Midland. SAS bought 95% of Spanair, the second largest airline in Spain, as well as Air Greenland. There are plans to dispose of all of these holdings[6] and an agreement to divest more than 80 percent of the holdings in Spanair was signed with a Catalonian group of investors led by Consorci de Turisme de Barcelona and Catalana d'Inciatives in January 2009.[7]

In May 1997 SAS formed the global Star Alliance network with Air Canada, Lufthansa, Thai Airways International and United Airlines. Four years earlier SAS unsuccessfully tried to merge with KLM, Star Alliance partner Austrian Airlines, and the now defunct Swissair, in a project called Alcazar.[8] This failure led to the departure the following year of CEO Jan Carlzon, who was credited for the financial turnaround of the company starting in 1981 and who envisioned SAS ownership of multiple airlines worldwide. The ownership structure of SAS was changed in June 2001, with a holding company being created in which the holdings of the governments changed to: Sweden (21.4%), Norway (14.3%) and Denmark (14.3%) and the remaining 50% publicly held and traded on the stock market.

With the coming of low-cost airlines and decreasing fares in Scandinavia the business turned into the red. To be profitable again, the airline had to cut costs. In a first step the airline sold its stakes in other companies, such as bmi, Spanair and AirBaltic, and began to restructure its operations.[10][11][12] This was to save costs by about 23 percent between 2008 and 2011. The next big cost-cutting measure followed by the end of 2011. It should generate cost savings of another three to four percent until 2015. In June 2012 the airline announced that they will extend this measure.[13] In November 2012 the company came under heavy pressure from its owners and banks to implement even heavier cost-cutting measures as a condition for continued financial support. Negotiations with the respective trade unions took place for more than a week and exceeded the original deadline, but in the end SAS and the trade unions reached an agreement that would increase the worktime, cutting salary between 12-20%, pension and retirement plans, and thus keep the airline flying. SAS drew some criticism for how they handled the negotiations, in denying facilities to the union delegations.[14] As of November 2013[update], there was the expectation that the company would show 2013 as its first profitable year since 2007.[15] 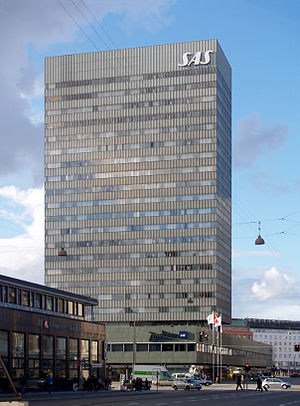 During its first decades, Scandinavian Airlines, SAS, build two large hotels in central Copenhagen, SAS Royal Hotel (5 stars) and the even larger SAS Hotel Scandinavia (4 stars and a Casino at 26th floor). After the deregulations of European commercial aviation, and the crisis which afterwards affected SAS, like many other national airline cooperations, Scandinavian Airlines sold their hotels to Radisson. 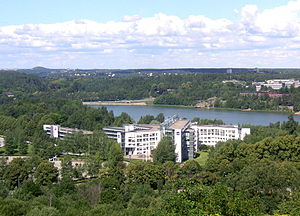 The current head office, the SAS Frösundavik Office Building as seen in 2007 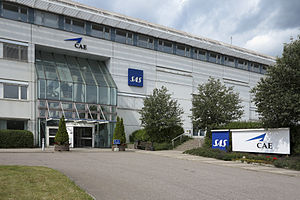 Besides the agreements SAS has with its Star Alliance partners, SAS has strategic agreements with Lufthansa, Swiss International Air Lines, Austrian Airlines and United Airlines. The agreement includes code sharing and schedule coordination to facilitate improved connections between SAS and its partner airlines. SAS also co-operates with the other airlines in the SAS Group.

The key trends for Scandinavian Airlines Group (which includes SAS Cargo, SAS Ground Handling and SAS Tech), are shown below: 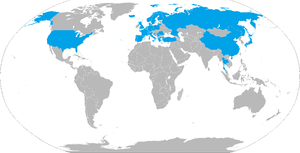 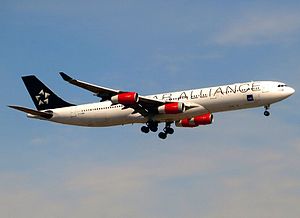 SAS is one of the founding members of the Star Alliance. This Star Alliance-liveried SAS plane is landing at Newark Liberty International Airport.

Scandinavian Airlines has codeshare agreements with the following airlines:

Scandinavian Airlines has interlining agreements with the following airlines: 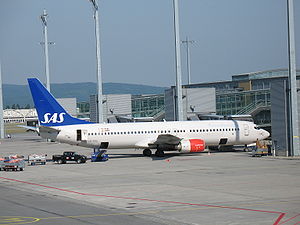 These statistics about each of SAS hubs and busiest airports are current as of March 2014. (Ranked by daily departures). 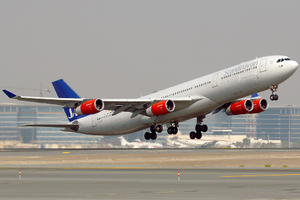 A Scandinavian Airlines A340-300 at Dubai International Airport (2007) 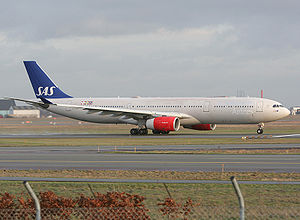 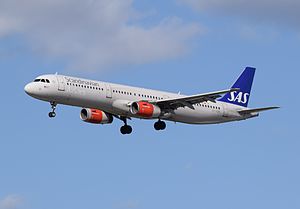 Scandinavian Airlines (including subsidiaries) operates the following aircraft (as of October 2015):[36][37][38]

On 20 June 2011, SAS announced an order for 30 new A320 next generation aircraft as part of its fleet harmonisation plan. SAS had earlier announced that the fleet will be harmonized. Its short-range aircraft will consist of two types from 2015: Airbus A320 family at the base in Copenhagen, and Boeing 737NG at the bases in Oslo and Stockholm. As of Dec 2014, the McDonnell Douglas MD-80s have been phased out. There were six leased A320s in the SAS fleet at the beginning of May 2013. 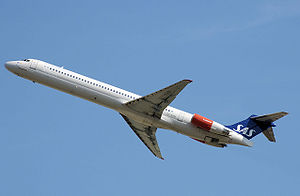 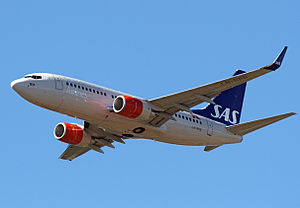 On 25 June 2013, SAS and Airbus signed a Memorandum of Understanding stating that SAS intends to buy twelve new-generation aircraft, including six options. The agreement consists of eight A350-900 with six options, and four A330-300E. The first new long haul aircraft to enter service will be the A330-300E, which will replace the aging A340-300 in 2015 as leasing agreements on these aircraft expire, SAS is though in plans for renewing some of the leasing agreements to be able to expand its long-haul fleet and add more long-haul destinations to its network. The A350-900 is planned to enter service beginning in 2018. SAS has dubbed this "A total renewal of long haul fleet", indicating that all former A340 and A330 will in fact be replaced.[47] 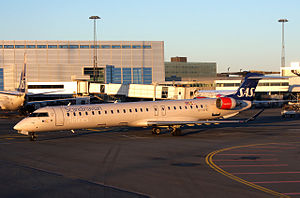 In September 2007, two separate incidents of similar landing gear failures occurred within four days of each other on SAS Dash 8-Q400 aircraft. A third incident occurred in October 2007. On 28 October 2007, in a move that was described as unique by the Swedish press, the board of directors announced that all 27 Dash 8 Q400 aircraft were to be removed from service due to three landing gear failures.[48] 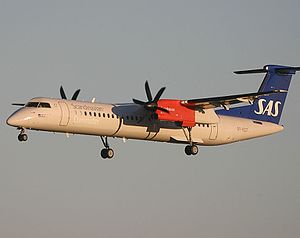 A press release from SAS said that the company had reached a settlement with Bombardier and Goodrich, whereby the airline would receive SEK one billion as compensation, while SAS would purchase 27 new aircraft, with an option of 24 more. These aircraft will consist of 13 of the CRJ900 Nextgen (10 to SAS and 3 to Estonian Air) and 14 of the updated Q400 Nextgen units (8 to airBaltic and 6 to Widerøe), with 7 additional options.[49][50] 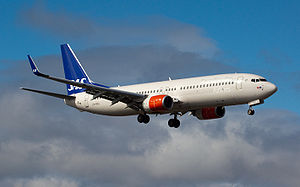 In November 2007, it was revealed that Swedish Civil Aviation Authority began an investigation and accused Scandinavian Airlines System of cutting corners for maintenance. The airline reportedly made 2,300 flights in which safety equipment was not up to standard.[51] 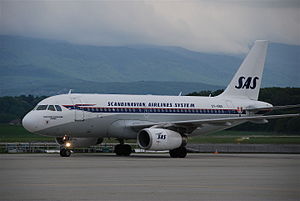 SAS planes look predominantly white, however, they are a very light beige (Pantone Warm Gray 2) with "Scandinavian" above the windows and "Airlines" below the windows in white lettering. The vertical stabilizers are blue with the traditional "SAS" logo on it. The engine casing is painted in scarlet (Pantone Warm Red) with the word Scandinavian in white, the thrust reversers are white. The typeface used is Rotis Semi Serif.

Apart from the standard livery, SAS also has an Airbus A319 in retro livery and two Boeing 737 and one Airbus A340 in Star Alliance-livery.

For long-haul flights business class, called SAS Business, is still offered and features wide sleeper seats. On the Airbus A330s and upgraded A340s seating is 1-2-1 on seats that convert into 196-202 cm flat beds, with power sockets and a 15-inch screen. On non upgraded A340s seating is 2-2-2 that converts into angled beds. On the Boeing 737 used on the Stavanger-Houston route, seating is 2-2 with the old business class seats.

Plus is SAS premium economy class. On intercontinental flights, seating is 2-3-2 on wide bodies, except on one A340 that has 2-4-2 seating in Plus. The seats offered on SAS Plus are wider than those in the SAS Go section.

On European flights, SAS Plus tickets are refundable, and include a meal, a double checked-in baggage allowance, and access to lounges and fast track security at the airport. The SAS Plus passengers are seated at the front of the aircraft and passengers can choose their seat at booking for free, but the seats there are otherwise the same as the SAS Go seats. The two-class system was introduced in June 2013, when business class was eliminated from intra-European flights.[52]

Available on selected European routes, SAS Go Light is aimed at competing with low-cost carriers for those who travel with hand luggage only. 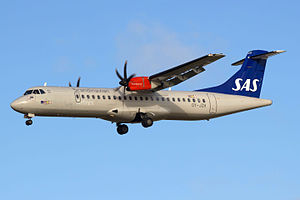 A Scandinavian Airlines ATR-72 operated by Jet Time at Copenhagen Airport. The ATR 72 is used on shorter routes within Scandinavia and to Finland and the Baltic states.

In 2006, SAS Sweden launched a new biometric system for use throughout Sweden. Each passenger's fingerprints are, for security purposes, matched to their respective checked baggage. The new technology will be phased in at all the airports served by SAS, although use of the system is voluntary for passengers. The system has been introduced in Norway.[citation needed]