The Scandinavian Mountains or the Scandes is a mountain range that runs through the Scandinavian Peninsula. The Scandinavian Mountains are often erroneously thought to be equivalent to the Scandinavian Caledonides. The western sides of the mountains drop precipitously into the North Sea and Norwegian Sea, forming the famous fjords of Norway, whereas to the northeast they gradually curve towards Finland. To the north they form the border between Norway and Sweden, still reaching 2,000 m high (6,600 ft) at the Arctic Circle. The mountain range just touches northwesternmost Finland, but are scarcely more than hills at their northernmost extension at the North Cape (Nordkapp).

The combination of a northerly location and moisture from the North Atlantic Ocean has caused the formation of many ice fields and glaciers. Temperature drops with increasing altitude, and permafrost becomes common from about 1,500 meters above sea level on their western slope in Southern Norway and at about 1,200 meter AMSL on their eastern slope in Southern Norway near the border with Sweden. In Northern Norway, permafrost becomes common from about 800 to 900 meters AMSL on the western slope and some 200- to 300-meters-lower on the eastern slope.[3] 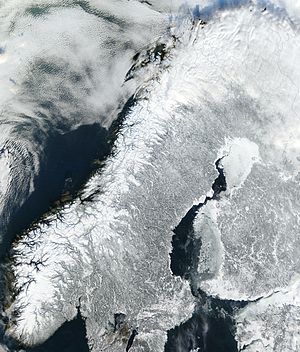 The Scandinavian mountains are composed of Precambrian and Paleozoic rocks, and are commonly characterized by steep sides and relatively flat tops. The rocks underlying the mountains are part of a system geologically connected with the mountains of Scotland, Ireland and, crossing the Atlantic Ocean, the Appalachian Mountains of North America.[citation needed].

The origin of today's mountain topography is debated by geologists. During the Paleozoic, a continental collision between Scandinavia and Greenland produced a Himalayas-sized mountain range named the Caledonide Mountains. The Caledonide Mountains underwent an extensional collapse during the Devonian. Severe continental extension occurred at the Scandinavian margin during Permian and Mesozoic time, followed by continental breakup and sea floor spreading around 55 million years ago. Many geologists consider the flat tops of the mountains as evidence that the Paleozoic Caledonide Mountains were essentially destroyed by erosion and that a low-relief, low-elevation peneplain was later uplifted. A few geophysicists consider the current mountains to be remnants of the Caledonian mountains. Under this hypothesis the Caledonide Mountains were eroded to one-fifth of their original height, and would be one of the oldest still-extant mountain ranges in the world.[citation needed]

The Scandinavian Montane Birch forest and grasslands terrestrial ecoregion is closely associated with the mountain range.

Its names in the Scandinavian languages are, in Swedish Skanderna,[4] Fjällen ("the Fells") or Kölen (Fjällen being by far the most[citation needed] frequent name and virtually the only one in modern colloquial speech in Sweden), in Finnish Skandit or uncommonly used Köli and in Norwegian Kjølen, with the three latter meaning The Keel. In 2013 another[4] Norwegian name got the most votes in a naming contest started by Norsk Geologisk Forening and Den Norske Turistforening[5]—Nordryggen ("the north ridge").

Main article: List of mountains in Norway by height

Of the 10 highest mountain peaks in Scandinavia (prominence greater than 30 m or 98 ft), six are situated in Oppland, Norway. The other four are situated in Sogn og Fjordane, Norway. There are 83 peaks equal to or taller than 2,200 m (7,218 ft) in Norway.

There are 12 peaks in Sweden that reach above 2,000 m high (6,600 ft), or 13 depending on how you define a peak. This list is defined according to UIAA. Eight of them are located in Sarek National Park and the neighbouring national park Stora Sjöfallet. The other four peaks are located in the further north region of Kebnekaise. All mountain names are in Sami but with the more common Swedish spelling of it.

Other popular mountains for skiers, climbers and hikers in Sweden

Landscape as seen from Meekonvaara (1019m) towards the highest fells

Highest independent prominence in Finland is found at Taivaskero. At 807 m high. 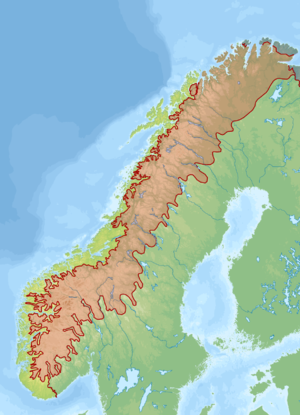