Scandinavian prehistory began when the Scandinavian peninsula, formerly entirely covered by thick ice, became free of ice at the end of the last ice age, c. 11,000 BC. At that time, a hunter gatherer people, the Ahrensburg culture, lived and hunted near the edge of the ice. It took until the 7th millennium BC for forest, wildlife and Mesolithic hunter-gatherers to fully colonise the newly available land. In southern Scandinavia, a Maglemosian culture (c. 7500 BC – 6000 BC) developed. The Maglemosian people lived in forest and wetland environments using fishing and hunting tools made from wood, bone and flint microliths. A characteristic of the culture are the sharply edged microliths of flintstone which were used for spear heads and arrowheads. Microliths finds are more sparse from c. 6000 BC and the period is said to transit into the Kongemose culture (c. 6000 BC – c. 5200 BC). The finds from this period are characterised by long flintstone flakes which were used for making the characteristic rhombic arrowheads, scrapers, drills, awls and toothed blades.

The Ertebølle culture (c. 5300 BC – 3950 BC) is the name of a hunter-gatherer and fisher culture dating to the end of the Mesolithic period. It was followed by the Funnelbeaker culture (4000–2700 BC), a culture that originated in southern parts of Europe and slowly advanced up through today's Uppland, Sweden. Tribes along the coasts of Svealand, Götaland, Åland, north-eastern Denmark and southern Norway learnt new technologies that became the Pitted Ware culture (3200 BC – 2300 BC).

Around 2800 BC, metal was introduced in Scandinavia in the Corded Ware culture. In much of Scandinavia, a Battle Axe culture became prominent, known from some 3,000 graves. The period 2500 BC – 500 BC also left many visible remains to modern times, most notably the many thousands rock carvings (petroglyphs) in western Sweden at Tanumshede and in Norway at Alta.

The density of archaeological sites in Sweden gives an indication of historical population density.

The pre-history of Sweden begins at the end of the Pleistocene epoch at the beginning of Holocene epoch, following the last ice age, the Weichselian glaciation. At the end of the ice age, large parts of south and middle Sweden were covered by water.

Parts of Denmark, Scania and the Norwegian coast line were free from ice around 13000 BC, and around 10000 BC the rim of ice was around Dalsland, Västergötland and Östergötland. It wasn't until 7000 BC that all of Svealand and the modern coastal regions of North-eastern Sweden were free of ice, although the land was by then deeply pressed underwater.

In Scandinavia, the time following the ice age begins at circa 9500 BC and is called at first the Yoldia Stage, after the Yoldia Sea, then the Ancylus Stage, after the Ancylus Lake in turn named after Ancylus fluviatilis, a small fresh-water gastropod from this time. By this time, Denmark and Sweden were joined and the "Baltic Sea" of the age was a fresh water lake called the Ancylus Lake. The Ancylus age is followed by formation of the Littorina Sea and the Litorina Stage (named after the Littorina littorea mollusc) at around 6200 BC.

With the first human colonization of this new land (the territory of modern Sweden was partly under water though, and with radically different coastlines) during the Ancylus and Litorina ages begins the Nordic Stone Age. In recent years there have been archaeological finds in caves which strongly suggest human inhabitation of Scandinavia before the Weichsel glaciation, at least 50,000 years ago, presumably by Neanderthals.

As the ice receded reindeer grazed on the plains of Denmark and southernmost Sweden. This was the land of the Ahrensburg culture, whose members hunted over territories 100 000 km² vast and lived in teepees on the tundra. On this land there was little forest but arctic white birch and rowan, but the taiga slowly appeared.

In the 7th millennium BC, when the reindeer and their hunters had moved for northern Scandinavia, forests had been established in the land. A culture called the Maglemosian culture lived in Denmark and southern Sweden, and north of them, in Norway and most of southern Sweden, the Fosna-Hensbacka culture, who lived mostly along the shores of the thriving forests. Utilizing fire, boats and stone tools enabled these Stone Age inhabitants to survive life in northern Europe. The northern hunter/gatherers followed the herds and the salmon runs, moving south during the winters, moving north again during the summers. These early peoples followed cultural traditions similar to those practised throughout other regions in the far north – areas including modern Finland, Russia, and across the Bering Strait into the northernmost strip of North America (containing portions of today's Alaska and Canada). 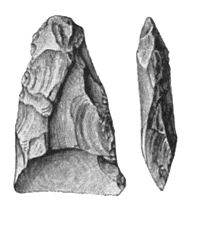 During the 6th millennium BC, southern Scandinavia was clad in lush forests of temperate broadleaf and mixed forests. In these forests roamed animals such as aurochs, wisent, moose and red deer. Now, the Kongemose culture lived off these animals. Like their predecessors, they also hunted seals and fished in the rich waters. North of the Kongemose people, lived other hunter-gatherers in most of southern Norway and Sweden, called the Nøstvet and Lihult cultures, descendants of the Fosna and Hensbacka cultures. These cultures still hunted, in the end of the 6th millennium BC when the Kongemose culture was replaced by the Ertebølle culture in the south.

During the 5th millennium BC, the Ertebølle culture took up pottery from the Linear Pottery culture in the south, whose members had long cultivated the land and kept animals. About 4000 BC South Scandinavia up to River Dalälven in Sweden became part of the Funnelbeaker culture. The Pitted Ware culture then developed along Sweden's east coast as a return to a hunting economy in the mid-4th millennium BC (see the Alvastra pile-dwelling).

It is not known what language these early Scandinavians spoke. It might have been similar to Basque, due to the distribution of the monuments by early megalith builders. Towards the end of the 3rd millennium BC, they were overrun by new groups who many scholars think spoke Proto-Indo-European, the Battle-Axe culture. This new people advanced up to Uppland and the Oslofjord, and they probably provided the language that was the ancestor of the modern Scandinavian languages. This new culture was individualistic and patriarchal with the battle axe as a status symbol, and were cattle herders. However, soon a new invention would arrive, that would usher in a time of cultural advance in Scandinavia, the Bronze Age.

The density of petroglyphs and cup marks in Sweden.[citation needed] Petroglyphs have also been found in Northern Sweden, for example Nämforsen, Glösa and Gärdesån.
See also: Nordic Bronze Age

During the Nordic Bronze Age from c. 1700 - 500 BC, an advanced civilization appears in Denmark, parts of Sweden and parts of Norway. They manufactured bronze tools and weapons as well as jewellery and artifacts of bronze and gold. All the bronze and gold was imported and it has been assumed that the civilization was founded in amber trade, through contacts with Central European and Mediterranean cultures.

The period between 2300 and 500 BC was the most intensive petroglyph-carving period in Scandinavia, with carvings depicting agricultural activities, animals, hunts, ships, ceremonies, warfare, etc.. Petroglyphs with themes of a sexual nature has also been found in Bohuslän, dating from 800 to 500 BC.

Tacitus (about 98 AD) described a nation called "Suiones" living on an island in the Ocean. These Suiones had ships that were peculiar because they had a prow in both ends (the shape we recognise as Viking ships). This word Suiones is the same name as in Anglo-Saxon Sweon whose country in Angle-Saxon was called Sweoland (Svealand). In Beowulf, this tribe is also called Sweoðeod, from which the name Sweden is derived, and the country has the name Sweorice, which is an old form, in Old English (Anglo-Saxon), of the present Swedish name for Sweden.

In the 6th century the Ostrogoth Jordanes mentioned a tribe named Suehans which is the same name as Tacitus' Suiones. He also unwittingly described the same tribe by a different name, the Suetidi which is the same as an old name for Sweden, Svíþjóð and the English Sweoðeod.

Several sources, such as Beowulf, Ynglingatal, Ynglinga saga, Saxo Grammaticus and Historia Norwegiae, mention a number of Swedish kings who lived in the 6th century, such as Eadgils, Ohthere and Onela, as well as a number of Geatish kings. Some of these kings were in all likelihood historic kings, although the sources sometimes give contradictory information, such as the death of Ottar. See Mythological kings of Sweden and Semi-legendary kings of Sweden.

In those days the kings were warlords rather than kings as we understand that title today, and what was to become Sweden, Norway and Denmark in a modern sense, were a number of petty kingdoms whose borders changed constantly as the kings killed each other, and had the local assemblies accept them as kings. The politics of these early kingdoms are retold in Beowulf (see e.g. the semi-legendary Swedish-Geatish wars) and the Norse sagas.

One of the most powerful kings was the Swedish king who according to early sources only ruled what is today eastern Svealand. It is unknown when it happened and it probably happened several times, but when sources become more reliable the territories of the Swedish kings include Västergötland and other parts of Götaland. This stage is by some considered to be the beginning of Sweden, as we know it today.