From Infogalactic: the planetary knowledge core
Jump to: navigation, search
Not to be confused with the Nordic Model. 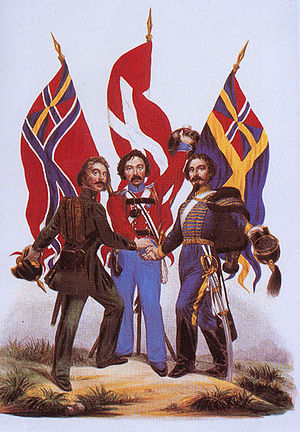 A 19th-century poster image of (from left to right) Norwegian, Danish and Swedish soldiers joining hands 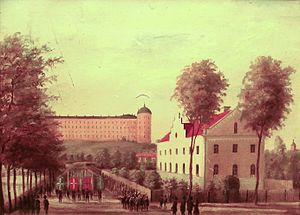 A meeting of Scandinavian students in Uppsala, Sweden, 1856. Parade marching next to Svandammen.

Scandinavism (also called Pan-Scandinavianism)[1] and Nordism[2] are literary and political movements that support various degrees of cooperation among the Scandinavian or Nordic countries. Scandinavism and Nordism are interchangeable terms for the literary, linguistic and cultural movement that focuses on promoting a shared Nordic past, a shared cultural heritage, a common Nordic mythology and a common linguistic root in Old Norse, and which led to the formation of joint periodicals and societies in support of Scandinavian literature and languages.[3] However, political Scandinavism and political Nordism are two distinct political movements which emerged at different times.

Political Scandinavism paralleled the 19th-century unification movements of Germany and Italy.[4] As opposed to the German and Italian counterparts, the Scandinavian state-building project was not successful and is no longer pursued.[1][4] It was at its height in the mid-19th century and supported the idea of Scandinavia as a unified region or a single nation, based on the common ethnic, linguistic, political and cultural heritage of the Scandinavian countries Denmark, Norway and Sweden. (These three countries are referred to as "three brothers" in the sixth stanza of the national anthem of Norway.)

The movement was initiated by Danish and Swedish university students in the 1840s, with a base in Scania.[5] In the beginning, the political establishments in the two countries, including the absolute monarch Christian VIII and Charles XIV with his "one man government", were suspicious of the movement.[5] The police in Denmark therefore kept the proponents of Scandinavism under close guard.

Hans Christian Andersen became an adherent of Scandinavism after a visit to Sweden in 1837, and committed himself to writing a poem that would convey the relatedness of Swedes, Danes, and Norwegians.[6] It was in July 1839, during a visit to the island of Funen, that Andersen first wrote the text of his poem, Jeg er en Skandinav ("I am a Scandinavian").[6] Andersen composed the poem to capture "the beauty of the Nordic spirit, the way the three sister nations have gradually grown together", as part of a Scandinavian national anthem.[6] Composer Otto Lindblad set the poem to music, and the composition was published in January 1840. Its popularity peaked in 1845, after which it was seldom sung.[6] Andersen spent two weeks at the Augustenborg Palace in the autumn of 1844.[7]

When Oscar I became king of Sweden and Norway in 1844, the relationship with Denmark improved and the movement started to gain support in liberal newspapers like Fædrelandet and Aftonbladet, which saw it as a way to counter the conservative powers that were ascendant across Europe. During the war between Denmark and Prussia in 1848, Sweden (then in union with Norway) offered support in form of a Norwegian-Swedish expeditionary force, though the force never saw combat. The movement never fully recovered after the second Danish-German war over Schleswig, when the Swedish government refused to join an alliance against the rising German power on the continent.

In 1872 the town of Dannevirke in New Zealand was founded by Danish, Norwegian and Swedish settlers. They had named their new town for the Dannevirke, the extensive Viking age fortification line which had a strong emotive symbolic role for 19th-century Danes and which had fallen into German hands in 1864 – and for whose defence a pan-Scandinavian alliance had failed to be formed.

Political Nordism was introduced with the Nordic Association which started through Swedish initiatives in 1919.[4] The movement also includes Finland, Iceland and the Danish territories Greenland and Faroe Islands and has an ideological base in Nordic economic co-operation and integration supported by the Nordic Council. It has been described as "collaborative nationalism".[8] The significance of the Nordic Council began to decrease after Denmark joined the European Economic Community in 1973. And after Sweden and Finland joined the European Union (EU) in 1995, the association lost most of its former importance. Although Norway chose through referendums in 1973 and 1995 not to join the EU, it has several treaties with the EU and is a part of Schengen treaty.

After World War II a decade of Nordic integration created initiatives and intergovernmental bodies such as the Nordic Passport Union, the Nordic Council and Scandinavian Airlines System. Nordic cooperation was however undermined during the Cold War because Sweden and Finland were not members of NATO. European integration and the accession of Sweden, Finland and Denmark to the EU, without Norway and Iceland, has undermined Nordic integration.

Gunnar Wetterberg, a Swedish historian and economist, wrote a book entered into the Nordic Council's year book that proposes the creation of a Nordic Federation. It would deal with foreign affairs, defence at federal level and coordinate economic and labour market policies, but leave most powers at national level. He sees a unified Nordic region as a natural evolution and potentially a major player in the EU and G20. However he sees the creation of such a state being decades away.[9]