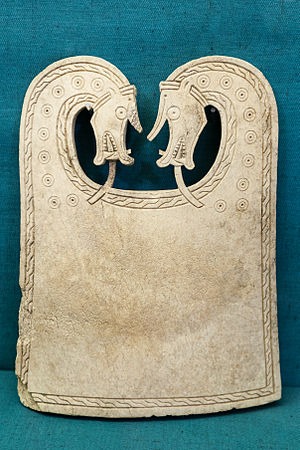 The whalebone plaque found at the site in 1991

The Scar boat burial is a Viking boat burial near the village of Scar, on Sanday, in Orkney, Scotland. The burial, which dates to between 875 and 950 AD, contained the remains of a man, an elderly woman, and a child, along with numerous grave goods. Although the site had to be excavated quickly because of the threat of coastal erosion owing to bad weather conditions, it yielded many important findings.

The site at The Crook Beach, 1 km northeast of Scar, was found in 1985 by John Dearness, a farmer on Sanday. He found bones sticking out of the ground and a small lead object, and thought that he might have discovered the resting place of a dead sailor. Dearness died before the significance of the site was realized.[1]

In 1991, archaeologist Julie Gibson visited the island, having heard of the discovery of the bones six years earlier. She was shown the small lead object, and took it to Kirkwall for identification. As it turned out to be a lead weight for measuring bullion, Gibson and Dr Raymond Lamb investigated the site further.[2]

Appreciating the significance of the site, the archaeologists realised they had to act swiftly, as it was exposed and rapidly eroding. Historic Scotland put together a team led by Magnar Dalland to excavate the site, which took place over November and December 1991.[1]

Description of the site

The wood of the 6.5-metre (21 ft) long and 1.5-metre (4.9 ft) wide boat had rotted away, leaving more than 300 iron rivets. It was placed in a boat-shaped stone-lined enclosure which was packed with further stones. There were also stones forming a walled enclosure inside the boat itself, within which were found the remains of three bodies.[3] Sand within the boat lining was found not to match known sand from Orkney, Shetland, or the Scottish mainland, indicating that the boat was not made in Scotland, and that both it and its occupants may have come from Norway or elsewhere.[1]

The walled enclosure was found to contain the remains of a man, a woman, and a child, along with numerous grave goods.[2] The man was aged about 30 when he died, the woman about 70 (a considerable age for the period), and the child—of unknown sex—was aged 10 or 11. There is evidence that the man had rowed a boat when he was younger, and that the woman had habitually sat cross-legged and possibly had spun flax.[4]