Schönbrunn Palace (German: Schloss Schönbrunn [ʃøːnˈbʁʊn]) is a former imperial summer residence located in Vienna, Austria. The 1,441-room Baroque palace is one of the most important architectural, cultural and historical monuments in the country. Since the mid-1950s it has been a major tourist attraction. The history of the palace and its vast gardens spans over 300 years, reflecting the changing tastes, interests, and aspirations of successive Habsburg monarchs.[1]

The Gloriette in the Schönbrunn Palace Garden

In the year 1569, Holy Roman Emperor Maximilian II purchased a large floodplain of the Wien river beneath a hill, situated between Meidling and Hietzing, where a former owner, in 1548, had erected a mansion called Katterburg. The emperor ordered the area to be fenced and put game there such as pheasants, ducks, deer and boar, in order to serve as the court's recreational hunting ground. In a small separate part of the area, "exotic" birds such as turkeys and peafowl were kept. Fishponds were built, too.

The name Schönbrunn (meaning "beautiful spring"), has its roots in an artesian well from which water was consumed by the court. 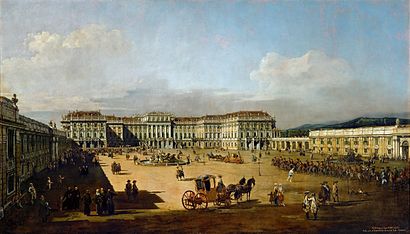 During the next century, the area was used as a hunting and recreation ground. Especially Eleonora Gonzaga, who loved hunting, spent much time there and was bequeathed the area as her widow's residence after the death of her husband, Ferdinand II. From 1638 to 1643, she added a palace to the Katterburg mansion, while in 1642 came the first mention of the name "Schönbrunn" on an invoice. The origins of the Schönbrunn orangery seem to go back to Eleonora Gonzaga as well. The Schönbrunn Palace in its present form was built and remodelled in 1740—50s during the reign of empress Maria Theresa[2] who received the estate as a wedding gift. Franz I commissioned the redecoration of the palace exterior in neoclassical style as it appears today.

Franz Joseph, the longest-reigning emperor of Austria, was born at Schönbrunn and spent a great deal of his life there. He died there, at the age of 86, on 21 November 1916. Following the downfall of the Habsburg monarchy in November 1918, the palace became the property of newly founded Austrian Republic and was preserved as a museum.

After World War II and during the Allied Occupation of Austria (1945—55), Schönbrunn Palace was requisitioned to provide offices for both the British Delegation to the Allied Commission for Austria and for the Headquarters for the small British Military Garrison present in Vienna. With the reestablishment of the Austrian republic in 1955, the palace once again became a museum. It is still sometimes used for important events such as the meeting between U.S. president John F. Kennedy and Soviet premier Nikita Khrushchev in 1961.

Since 1992 the palace and gardens are owned and administered by the Schloss Schönbrunn Kultur- und Betriebsges.m.b.H., a limited-liability company wholly owned by the Republic of Austria. The company conducts preservation and restoration of all palace properties without state subsidies.[3] UNESCO catalogued Schönbrunn Palace on the World Heritage List in 1996, together with its gardens, as a remarkable Baroque ensemble and example of synthesis of the arts (Gesamtkunstwerk).

The sculpted garden space between the palace and the Sun Fountain is called the Great Parterre. The French garden, a big part of the area, was planned by Jean Trehet, a disciple of André Le Nôtre, in 1695. It contains, among other things, a maze.

The complex however includes many more attractions: Besides the Tiergarten, an orangerie erected around 1755, staple luxuries of European palaces of its type, a palm house (replacing, by 1882, around ten earlier and smaller glass houses in the western part of the park) is noteworthy. Western parts were turned into English garden style in 1828–1852.

The area called Meidlinger Vertiefung (engl.: depression of Meidling) to the west of the castle was turned into a play area and drill ground for the children of the Habsburgs in the 19th century. At this time it was common to use parks for the military education of young princes.[4] Whereas the miniature bastion, which was built for this purpose, does not exist anymore, the garden pavilion that was used as shelter still does. It was turned into a café in 1927 and is known as Landtmann’s Jausen Station since 2013.[5]

At the outmost western edge, a botanical garden going back to an earlier arboretum was re-arranged in 1828, when the Old Palm House was built. A modern enclosure for Orangutans, was restored besides a restaurant and office rooms in 2009.

The Great Parterre of Schönbrunn is lined with 32 sculptures, which represent deities and virtues.

The garden axis points towards a 60-metre-high hill (200 ft), which since 1775 has been crowned by the Gloriette structure (Fischer von Erlach had initially planned to erect the main palace on the top of this hill).

Maria Theresa decided Gloriette should be designed to glorify Habsburg power and the Just War (a war that would be carried out of "necessity" and lead to peace), and thereby ordered to recycle "otherwise useless stone" which was left from the almost-demolition of Schloss Neugebäude. The same material was also to be used for the Roman ruin.

The Gloriette was destroyed in the Second World War, but had already been restored by 1947, and was restored again in 1995.

The Gloriette today houses a café and an observation deck, which provides panoramic views of the city.

Originally known as the Ruin of Carthage, the Roman Ruin is a set of follies that was designed by the architect Johann Ferdinand Hetzendorf von Hohenberg and erected as an entirely new architectural feature in 1778. Fully integrated into its parkland surroundings, this architectural ensemble should be understood as a picturesque horticultural feature and not simply as a ruin, which due to lack of maintenance it had increasingly grown to resemble prior to its recent restoration.

The fashion for picturesque ruins that became widespread with the rise of the Romantic movement soon after the middle of the 18th century symbolize both the decline of once great powers and the preservation of the remains of a heroic past. Erected at the same time not far from the Roman Ruin, the Obelisk Fountain was intended to complete the iconographic program of the park at Schönbrunn as a symbol of stability and permanence.

The Roman Ruin consists of a rectangular pool enclosed by a massive arch with lateral walls, evoking the impression of an ancient edifice slowly crumbling into the ground. In the pool in front of the ruin is a seemingly haphazard arrangement of stone fragments supporting a figural group which symbolizes the rivers Vltava and Elbe.

Schönbrunn is Vienna's most popular tourist destination, attended by 2,600,000 visitors in 2010.[6] The whole Schönbrunn complex with Tiergarten Schönbrunn, Palmenhaus, Wüstenhaus and the Wagenburg, accounted for more than five million visitors.[7] At the official website tickets can be purchased in advance for tours. In addition to tours and tour packages, many classical concerts featuring the music of Mozart and his contemporaries can be enjoyed with the added benefit of more time in the spectacular halls, Orangerie, or Schlosstheater.

The Summer Night Concert Schönbrunn is held every year.

The gardens and palace have been the location for many films and television productions including such productions as the Sissi trilogy in 1950s, A Breath of Scandal with Sophia Loren and also briefly in James Bond's The Living Daylights when Bond and Kara are riding through the palace garden. The palace is also seen during the end credits.(1987) .[8] The comedy The Great Race was filmed there in 1965. The television drama The Crown Prince starring Max von Thun as Crown Prince Rudolf and Klaus Maria Branderer as Kaiser Franz-Josef was more recently filmed there. Austrian television series, Kommissar Rex has shot several episodes there. In the Kuroshitsuji episode 2: His Butler, Omnipotent, Sebastian Michaelis tells his master that he was a guest at the Schönbrunn Palace soirees before his contract was sealed with Ciel as he teaches the young master how to dance. Dutch violinist Andre Rieu and the Johann Strauss Orchestra, along with the Opera Babes used it as the back drop for a version of the European Anthem, "Ode to Joy" in 2003.

In the sixth leg of the Amazing Race 23 teams had to race through the garden's maze and search for the pit stop located at the Gloriette.

The palace was recently selected as the main motif of a high value commemorative coin: the Austrian 10-euro The Palace of Schönbrunn silver coin, minted on October 8, 2003. The obverse shows the central part of the frontage of the palace behind one of the great fountains in the open space.