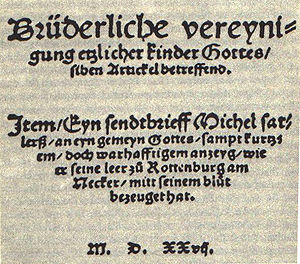 Title page of the Schleitheim Confession

The Schleitheim Confession was the most representative statement of Anabaptist principles, endorsed unanimously by a meeting of Swiss Anabaptists in 1527 in Schleitheim (Switzerland). The meeting was chaired by Michael Sattler. Michael Sattler was the leader of the Swiss and southern German Anabaptist movement. Shortly after the Schleitheim conference, Sattler was arrested by Austrian Roman Catholic authorities, and put on trial along with a number of other Anabaptists; he was found guilty[clarification needed] and was executed.[1] The South German Ordnung of approximately the same date is similar to that of the Schleitheim Confession but contains many more Biblical references supporting the confession.[2]:191

The Confession consisted of seven articles, written during a time of severe persecution:

Baptism
Baptism is administered to those who have consciously repented and amended their lives and believe that Christ has died for their sins and who request it for themselves. Infants, therefore, were not to be baptized.
The Ban (Excommunication)
A Christian should live with discipline and walk in the way of righteousness. Those who slip and fall into sin should be admonished twice in secret, but the third offense should be openly disciplined and banned as a final recourse. This should always occur prior to the breaking of the bread.
Breaking of Bread (Communion)
Only those who have been baptized can take part in communion. Participation in Communion is a remembrance of Christ's body and blood; the real body and blood of Christ is not present in the sacrament.[3]
Separation from Evil
The community of Christians shall have no association with those who remain in disobedience and a spirit of rebellion against God. There can be no fellowship with the wicked in the world; there can be no participation in works, church services, meetings and civil affairs of those who live in contradiction to the commands of God (Catholics and Protestants). All evil must be resisted including their weapons of force such as the sword and armor.
Pastors in the Church
Pastors should be men of good repute. Some of the responsibilities they must faithfully carry out are teaching, disciplining, the ban, leading in prayer, and the sacraments. They are to be supported by the church, but must also be disciplined if they sin.
The Sword (Christian pacifism) - nonresistance
Violence must not be used in any circumstance. The way of nonviolence is patterned after the example of Christ who never exhibited violence in the face of persecution or as a punishment for sin. A Christian should not pass judgment in worldly disputes. It is not appropriate for a Christian to serve as a magistrate; a magistrate acts according to the rules of the world, not according to the rules of heaven; their weapons are worldly, but the weapons of a Christian are spiritual.
The Oath
No (oaths) should be taken because Jesus prohibited the taking of oaths and swearing. Testifying is not the same thing as swearing. When a person bears testimony, they are testifying about the present, whether it be good or evil.[4]