The Duchy of Schleswig (Danish: Hertugdømmet Slesvig; German: Herzogtum Schleswig; Low German: Sleswig; North Frisian: Slaswik) was a principality in Southern Jutland (Sønderjylland) covering the area about 60 km north and 70 km south of the current border between Germany and Denmark; the territory has been divided between the two countries since 1920, with Northern Schleswig in Denmark and Southern Schleswig in Germany. The region is also called Sleswick in English.

The area's traditional significance lies in the transfer of goods between the North Sea and the Baltic Sea, connecting the trade route through Russia with the trade routes along the Rhine and the Atlantic coast (see also Kiel Canal). 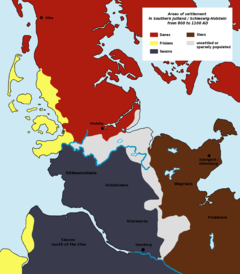 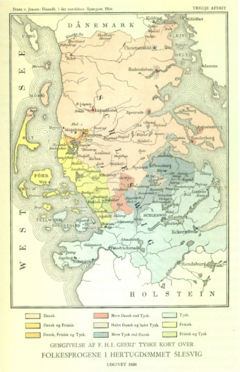 Language shift in the 19th century in Southern Schleswig

Roman sources place the homeland of the Jute tribe north of the river Eider and that of the Angles to its south, who in turn abutted the neighbouring Saxons. By the early Middle Ages the population of Schleswig consisted of Danes to the north of Danevirke and Schlei and on the peninsula Schwansen, North Frisians on the west coast below a line slightly south of the present border and on the islands, and Saxon (or Low German) in the far South. During the 14th century the population on Schwansen began to speak German, but otherwise the ethnic borders remained remarkably stable until around 1800 with the exception of the population in the towns that became increasingly German from the 14th century onwards.

During the early Viking Age, Haithabu - Scandinavia's biggest trading centre - was located in this region, which is also the location of the interlocking fortifications known as the Danewerk. Its construction, and in particular its great expansion around 737, has been interpreted as an indication of the emergence of a unified Danish state.[1] In May 1931 scientists of the National Museum of Denmark announced the finding of eighteen Viking graves with the remains of eighteen men in them. The discovery came during excavations in Schleswig. The skeletons indicated that the men were bigger proportioned than twentieth-century Danish men. Each of the graves was laid out from east to west. Researchers surmised that the bodies were entombed in wooden coffins originally, but only the iron nails remained.[2] Towards the end of the Early Middle Ages, Schleswig formed part of the historical Lands of Denmark as Denmark unified out of a number of petty chiefdoms in the 8th to 10th centuries (the puissant of the Viking incursions).

The southern boundary of Denmark in the region of the Eider River and the Danevirke was a source of continuous dispute. The Treaty of Heiligen was signed in 811 between the Danish King Hemming and Charlemagne, by which the border was established at the Eider. During the 10th century there were several wars between East Francia and Denmark. In 1027, Conrad II and Canute the Great again settled their mutual border at the Eider.[3]

In 1115, king Niels created his nephew Canute Lavard - a son of his predecessor Eric I - Earl of Schleswig, a title used for only a short time before the recipient began to style himself Duke.[4]

In 1230s, Southern Jutland (Duchy of Slesvig) was allotted as an appanage to Abel Valdemarsen, Canute's great-grandson, a younger son of Valdemar II of Denmark. Abel, having wrested the Danish throne to himself for a brief period, left his duchy to his sons and their successors, who pressed claims to the throne of Denmark for much of the next century, so that the Danish kings were at odds with their cousins, the dukes of Slesvig. Feuds and marital alliances brought the Abel dynasty into a close connection with the German Duchy of Holstein by the 15th century. The latter was a fief subordinate to the Holy Roman Empire, while Schleswig remained a Danish fief. These dual loyalties were to become a main root of the dispute between the German states and Denmark in the 19th century, when the ideas of romantic nationalism and the nation-state won popular support.

The title Duke of Schleswig was inherited in 1460 by the hereditary kings of Norway who were also regularly elected kings of Denmark simultaneously, and their sons (unlike Denmark which was not hereditary). This was an anomaly – a king holding a ducal title, which he as king was the fount of and its liege lord. The title and anomaly survived presumably because it was already co-regally held by the king's sons. Between 1544 and 1713/20 the ducal reign had become a condominium, with the royal House of Oldenburg and its cadet branch House of Holstein-Gottorp jointly holding the stake. A third branch in the condominium, the short-lived House of Haderslev, was already extinct in 1580 by the time of John the Elder.
Following the Protestant Reformation when Latin was replaced as the medium of church service by the vernacular languages, the diocese of Schleswig was divided and an autonomous archdeaconry of Haderslev created. On the west coast the Danish diocese of Ribe stopped about 5 km north of the present border. This created a new cultural dividing line in the duchy because German was used for church services and teaching in the diocese of Schleswig and Danish was used in the diocese of Ribe and the archdeaconry of Haderslev. This line corresponds remarkably well with the present border.

In the 17th century a series of wars between Denmark and Sweden—which Denmark lost—devastated the region economically. However the nobility responded with a new agricultural system that restored prosperity. In the period 1600 to 1800 the region experienced the growth of manorialism of the sort common in the rye-growing regions of eastern Germany. The manors were large holdings with the work done by feudal peasant farmers. They specialized in high quality dairy products. Feudal lordship was combined with technical modernization, and the distinction between unfree labour and paid work was often vague. The feudal system was gradually abolished in the late 18th century, starting with the crown lands in 1765 and later the estates of the nobility. In 1805 all serfdom was abolished and land tenure reforms allowed former peasants to own their own farms.[5]

19th century and the rise of nationalism

From around 1800 to 1840 the Danish speaking population on the Angeln peninsula between Schleswig and Flensburg began to switch to Low German and in the same period many North Frisians also switched to Low German. This linguistic change created a new de facto dividing line between German and Danish speakers north of Tønder and south of Flensburg. From around 1830 large segments of the population began to identify with either German or Danish nationality and mobilized politically. In Denmark, the National Liberal Party used the Schleswig Question as part of their agitation and demanded that the Duchy be incorporated in the Danish kingdom under the slogan "Denmark to the Eider". This caused a conflict between Denmark and the German states over Schleswig and Holstein which led to the Schleswig-Holstein Question of the 19th century. When the National Liberals came to power in Denmark, in 1848, it provoked an uprising of ethnic Germans who supported Schleswig's ties with Holstein. This led to the First War of Schleswig. Denmark was victorious and the Prussian troops were ordered to pull out of Schleswig and Holstein following the London Protocol of 1852.

Denmark again attempted to integrate Schleswig, by creating a new common constitution (the so-called November Constitution) for Denmark and Schleswig in 1863, but the German Confederation, led by Prussia and Austria, defeated the Danes in the Second War of Schleswig the following year. Prussia and Austria then assumed administration of Schleswig and Holstein respectively under the Gastein Convention of 14 August 1865. However, tensions between the two powers culminated in the Austro-Prussian War of 1866. In the Peace of Prague, the victorious Prussians annexed both Schleswig and Holstein, creating the province of Schleswig-Holstein. Provision for the cession of northern Schleswig to Denmark was made pending a popular vote in favour of this. In 1878, however, Austria went back on this provision, and Denmark, in a Treaty of 1907, with Germany, recognized that, by the agreement between Austria and Prussia, the frontier between Prussia and Denmark had finally been settled.[6]

Following the Second World War, a substantial part of the German population in Southern Schleswig changed their nationality and declared themselves as Danish. This change was caused by a number of factors, most importantly the German defeat and an influx of a large number of refugees from eastern Germany, whose culture and appearance differed from the local Germans, who were mostly descendents of Danish families that had changed their nationality in the 19th century. The change created a temporary Danish majority in the region and a demand for a new referendum from the Danish population in South Schleswig and some Danish politicians, including prime minister Knud Kristensen. But the majority in the Danish parliament refused to support a referendum in South Schleswig, fearing that the "new Danes" were not genuine in their change of nationality. This proved to be the case and, from 1948 the Danish population began to shrink again. By the early 1950s, it nevertheless had stabilised at a level four times higher than the pre-war number.

In the Copenhagen-Bonn declaration of 1955, Germany and Denmark promised to uphold the rights of each other's minority population. Today, both parts co-operate as a Euroregion, despite a national border dividing the former duchy. As Denmark and Germany are both part of the Schengen Area, there are no controls at the border. 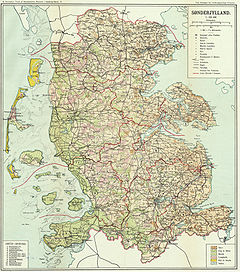 In the 19th century, there was a naming dispute concerning the use of Schleswig or Slesvig and Sønderjylland (Southern Jutland). Originally the duchy was called Sønderjylland (Southern Jutland) but in the late 14th century the name of the city Slesvig (now Schleswig) started to be used for the whole territory. The term "Sønderjylland" was hardly used between the 16th and 19th centuries, and in this period the name "Schleswig" had no special political connotations. But around 1830, some Danes started to re-introduce the archaic term Sønderjylland to emphasize the area's history before its association with Holstein and its connection with the rest of Jutland. Its revival and widespread use in the 19th Century therefore had a clear Danish nationalist connotation of laying a claim to the territory and objecting to the German claims. "Olsen's Map", published by the Danish cartographer Olsen[citation needed] in the 1830s that used this term, aroused a storm of protests by the duchy's German inhabitants. Even though many Danish nationalists, such as the National Liberal ideologue and agitator Orla Lehmann, used the name "Schleswig", it began to assume a clear German nationalist character in the mid 19th century – especially when included in the combined term "Schleswig-Holstein". A central element of the German nationalistic claim was the insistence on Schleswig and Holstein being a single, indivisible entity. Since Holstein was legally part of the German Confederation, and ethnically entirely German with no Danish population, use of that name implied that both provinces should belong to Germany and that their connection with Denmark should be weakened or altogether severed. After the German conquest in 1864, the term Sønderjylland became increasingly dominant among the Danish population, even though most Danes still had no objection to the use of "Schleswig" as such (it is etymologically of Danish origin) and many of them still used it, themselves, in its Danish version "Slesvig". An example is the founding of De Nordslesvigske Landboforeninger (The North Schleswig Farmers Association). In 1866 Schleswig and Holstein were legally merged into the Prussian province of Schleswig-Holstein. The naming dispute was resolved with the 1920 plebiscites and partition, each side applying its preferred name to the part of the territory remaining in its possession – though both terms can, in principle, still refer to the entire region. Northern Schleswig was, after the 1920 plebiscites, officially named The Southern Jutland districts (de sønderjyske landsdele), while Southern Schleswig then remained a part of the Prussian province, which became the German state of Schleswig-Holstein in 1946.