Schleswig (German pronunciation: [ˈʃleːsvɪç]; Danish: Slesvig; South Jutlandic: Sljasvig; archaic English: Sleswick; Low German: Sleswig) is a town in the northeastern part of Schleswig-Holstein, Germany. It is the capital of the Kreis (district) Schleswig-Flensburg. It has a population of about 27,000, the main industries being leather and food processing. It takes its name from the Schlei, an inlet of the Baltic sea at the end of which it sits, and "vik" or "vig" which means bay in Old Norse and Danish. Schleswig or Slesvig therefore means bay of the Schlei. 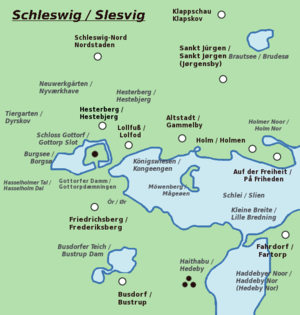 The city lies at the western end of the Schlei Förde, which separates the two peninsulas of Angeln and Schwansen and is on the western edge of the Schleswig-Holstein Uplands on the transition to the Geest country. The urban area ranges from 0 to 20 m above sea level. Brautsee (lake) is in the town.

The nearest major cities are Flensburg, Husum and Kiel. Autobahn 7 runs immediately west of the city. Highways 76 and 77 end in Schleswig and B 201 runs to the north of the town. Schleswig station is a stop for InterCity and Intercity-Express trains and is on the Hamburg–Neumünster–Flensburg and Husum–Kiel lines.

The climate is humid and maritime. The annual mean temperature is 8 °C and precipitation averages 925 mm. 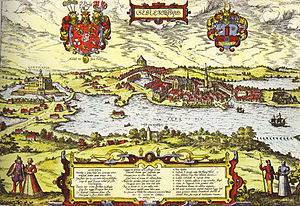 The Viking settlement of Hedeby, located south of the modern town, was first mentioned in 804. It was a powerful settlement in the Baltic region, dominating the area for more than 200 years. In 1050, following several destructions, the population was moved to the opposite shore of the Schlei, becoming the city of Schleswig. In 1066 Hedeby was finally destroyed, and Schleswig remained as a part of the Danish kingdom.[verification needed]

In 1544 Gottorf Castle became the residence of the local rulers. The dukes of Gottorf were vassals of the Danish kings and ruled over much of present day Schleswig-Holstein. In 1721, when the Great Northern War ended, the dukes of Gottorf lost their power and their land became Danish crown land. After the Second Schleswig War (1864), Schleswig was annexed by the Kingdom of Prussia.

Neuwerk garden with the Globushaus and Gottorf Castle in the background