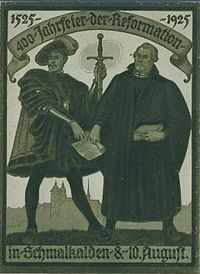 Postcard from 1925 celebrating the 400th anniversary of the Schmalkaldic League

The Schmalkaldic League (German: Schmalkaldischer Bund; Latin: Foedus Smalcaldicum or Liga Smalcaldica) was a defensive alliance of Lutheran princes within the Holy Roman Empire during the mid-16th century. Although originally started for religious motives soon after the start of the Protestant Reformation, its members eventually intended for the League to replace the Holy Roman Empire as their source of political allegiance.[1] While it was not the first alliance of its kind, unlike previous formations, such as the League of Torgau, the Schmalkaldic League had a substantial military to defend its political and religious interests. It received its name from the town of Schmalkalden, in the German state of Thuringia. 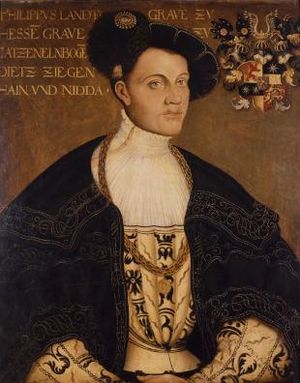 Portrait of Philip I, Landgrave of Hesse

The League was officially established on 27 February[2] 1531, by Philip I, Landgrave of Hesse, and John Frederick I, Elector of Saxony, the two most powerful Protestant rulers at the time.[3] It originated as a defensive religious alliance, with the members pledging to defend each other should their territories be attacked by Charles V, the Holy Roman Emperor. At the insistence of the Elector of Saxony, membership was conditional on agreement to the Lutheran Augsburg or Tetrapolitan Confessions. This solidified the dominance of Lutheranism in Germany to the exclusion of Zwinglianism, which had some adherents up to this time.[4]

The League quickly became more of a territorial political movement, as breaking from the Catholic Church offered significant economic advantages. In December, 1535, the league admitted anyone who would subscribe to the Augsburg Confession, thus Anhalt, Württemberg, Pomerania, as well as the free imperial cities of Augsburg, Frankfurt am Main, and Kempten joined the alliance.[5] 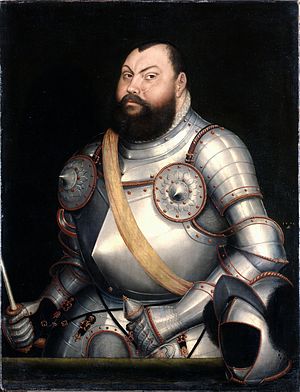 John Frederick I of Saxony by Lucas Cranach the Younger.

Starting in 1535, Francis I of France, while vigorously persecuting Protestants at home, nevertheless supported the Protestant princes in their struggle against their common foe. This tactical support ended in 1544 with the signing of the Peace of Crépy whereby the French king pledged to stop backing the Protestant princes and the League. Following on the peace with France, the Emperor signed a truce with the Ottoman Empire, which was to free even more resources for a final confrontation with the League.

In 1538, the Schmalkaldic League allied with newly reformed Denmark. In 1539 the League acquired Brandenburg, which was under the leadership of Joachim II Hector.[6] In 1545 the League gained the allegiance of the Electorate of the Palatinate, under the control of Elector Frederick III.[7] In 1544 Denmark and the Holy Roman Empire signed the Treaty of Speyer, which stated that during the reign of Christian III Denmark would maintain a peaceful foreign policy towards the Holy Roman Empire.

The members of the League agreed to provide 10,000 infantry and 2,000 cavalry[8] for their mutual protection. They rarely provoked Charles directly, but confiscated Church land, expelled bishops and Catholic princes, and helped spread Lutheranism throughout northern Germany. Martin Luther planned to present to the League the Schmalkald Articles, a stricter Protestant confession, during a meeting in 1537.[9] Luther attended the critical meeting in 1537, but spent most of his time suffering from kidney stones. The rulers and princes even met in the home where Luther was staying. Though Luther was asked to prepare the articles of faith that came to be known as the Schmalcald Articles, they were not formally adopted at the time of the meeting, though later they were incorporated into the Lutheran Confessions, in the Book of Concord, of 1580, in German, and in Latin translation, in the official Latin edition of the Book of Concord, the Leipzig edition of 1584.

For fifteen years the League was able to exist without opposition, because Charles was busy fighting wars with France and the Ottoman Empire. The Ottoman–Habsburg wars lasted from 1526 until 1571. In 1535 Charles led a successful campaign against Tunis. Francis I of France, in an effort to limit the power of the Habsburgs, allied with Suleiman the Magnificent of the Ottoman Empire, forming a Franco-Ottoman alliance. The Italian War of 1535–1538, between France and the Holy Roman Empire, ended in 1538 with the Truce of Nice. The final war during this period Charles fought against France, the Italian War of 1542-1544, ended with inconclusive results and the Treaty of Crépy.[9] 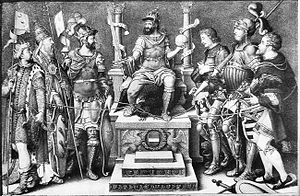 Charles V, enthroned over his defeated enemies (from left): Suleiman the Magnificent, Pope Clement VII, Francis I, the Duke of Cleves, the Landgrave of Hesse, and the Duke of Saxony. Giulio Clovio, mid-16th century

After Charles made peace with Francis, he focused on suppressing Protestant resistance within his empire. From 1546 to 1547, in what is known as the Schmalkaldic War, Charles and his allies fought the League over the territories of Ernestine Saxony and Albertine Saxony. Although the League's military forces may have been superior, its leaders were incompetent and unable to agree on any definitive battle plans.[10] Despite the fact that Pope Paul III withdrew his troops from the Imperial forces and halved his subsidy, on 24 April 1547, the imperial forces gathered by Charles routed the League's forces at the Battle of Mühlberg, capturing many leaders, including, most notably, Johann Frederick the Magnanimous. Philip of Hesse tried to negotiate but the Emperor refused and he surrendered in May.[11] In theory this meant that the residents of thirty different cities were returned to Catholicism but in fact this was not the case.[12] This battle effectively won the war for Charles; only two cities continued to resist. Many of the princes and key reformers, such as Martin Bucer, fled to England, where they directly influenced the English Reformation.

In 1548 the victorious Charles forced the Schmalkaldic League to agree to the terms set forth in the Augsburg Interim. However, by the 1550s, Protestantism had established itself too firmly within Central Europe to be ended by brute force. A small Protestant victory in 1552 forced Charles, weary from three decades of war, to sign the Peace of Passau, which granted some freedoms to Protestants and ended all of Charles' hopes of religious unity within his empire. Three years later, the Peace of Augsburg granted Lutheranism official status within the Holy Roman Empire and let princes choose the official religion within the domains they controlled.