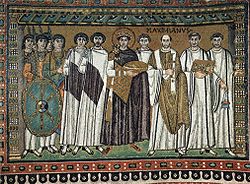 Emperor Justinian I and his court, from the Basilica of San Vitale in Ravenna. The soldiers left, with the golden neck-torques typical of Byzantine guardsmen, are scholares.

The Scholae Palatinae (literally "Palatine Schools", in Greek: Σχολαί, Scholai) were an elite military guard unit, usually ascribed to the Roman Emperor Constantine the Great as a replacement for the equites singulares Augusti, the cavalry arm of the Praetorian Guard. The Scholae survived in Roman and later Byzantine service until they disappeared in the late 11th century, during the reign of Alexios I Komnenos. 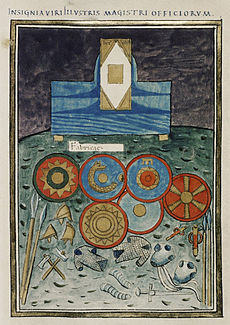 During the civil wars of the late Tetrarchy, Caesar Flavius Valerius Severus, following the orders of Galerius (reigned 305–311), attempted to disband the Praetorian Guard but only managed to lead the rest of them in revolting and joining Maxentius.[citation needed] When Constantine the Great (r. 306–337), launching an invasion of Italy in 312, forced a final confrontation at the Milvian Bridge, the Praetorian cohorts made up the most prominent element of Maxentius' army. Later, in Rome, the victorious Constantine definitively disbanded the Praetorian Guard. Although there is no direct evidence that Constantine established the Scholae Palatinae at the same time, the lack of a bodyguard unit would have become immediately apparent, and he is commonly regarded as their founder. Nevertheless, some units, such as the schola gentilium ("school of tribesmen") are attested much earlier than 312, and may have their origins in the reign of Diocletian (r. 284–305).[citation needed] 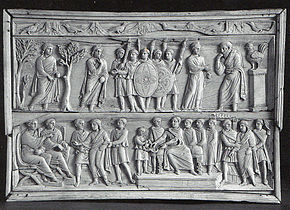 Palatine insignia on the shields of the soldiers in the Arrest of Christ on the Brescia Casket, late 4th century.

The term "schola" was commonly used in the early 4th century to refer to organized corps of the imperial retinue, both civil and military, and derives from the fact that they occupied specific rooms or chambers in the palace. Each schola was formed into an elite cavalry regiment of around 500 troops.[1] Many scholarians (Latin: scholares, Greek: σχολάριοι, scholarioi) were recruited from among Germanic tribes.[2] In the West, these were Franks and Alamanni,[3] while in the East, Goths were employed. In the East, under the impact of anti-Gothic policies, from the mid-5th century they were largely replaced with Armenians and Isaurians. However, evidence of the scholarians mentioned in primary sources indicates that the presence of native Romans in the scholae was not negligible. Of the recorded and named scholarians in the fourth century, ten are definitely Roman, forty one probably Roman; whilst only five are definitely barbarian and eleven probably barbarian.[4]

Each schola was commanded by a tribunus who ranked as a comes of the first class, and who were discharged with a rank equal to that of a provincial dux.[5] The tribunus had a number of senior officers called domestici or protectores directly under him.[6] Unlike the Praetorians, there was no overall military commander of the scholae, and the Emperor retained direct control over them; however, for administrative purposes, the scholae were eventually placed under the direction of the magister officiorum.[7] In the Notitia Dignitatum of the late 4th century, seven scholae are listed for the Eastern Empire and five for the Western.[8] In Justinian I's time (r. 527–565), but also possibly in earlier times, the scholae were billeted in the wider neighbourhood of Constantinople, in the towns of Bithynia and Thrace, serving in the palace by rotation.[2]

As befitted their guards status, the scholarians received higher pay and enjoyed more privileges than the regular army: they received extra rations (annonae civicae), were exempt from the recruitment tax (privilegiis scholarum) and were often used by the Emperors on civilian missions inside the Empire.[6] Gradually however, the ease of palace life and lack of actual campaigning, as the Emperors ceased to take the field themselves, lessened their combat abilities. In the East, they were eventually replaced as the main imperial bodyguard by the Excubitors, founded by Emperor Leo I the Thracian (r. 457–474), while in the West, they were permanently disbanded by the Ostrogoth ruler Theodoric the Great (ruler of Italy in 493–526).[9] Under Emperor Zeno (r. 474–491), they degenerated to parade-ground display troops: as it became possible to buy an appointment into the ranks of the scholae, and the social status and benefits this entailed, the units were increasingly filled with by the capital's well-connected young nobility. Emperor Justinian is said to have caused panic amongst their members by proposing that they be sent on an expedition. Justinian also raised four "supernumerary" scholae of 2,000 men purely in order to raise money from the sale of the appointments. It seems that this increase was reverted by the same emperor later.[6]

Forty scholares, named candidati for their bright white tunics, were selected to form the Emperor's personal bodyguard,[10] and although by the 6th century they too fulfilled a purely ceremonial role, in the 4th century they accompanied the emperors on campaign, as for example Julian (r. 361–363) in Persia.[11]

Note: The suffixes "seniorum" and "iuniorum" refer to units of the same ancestry, now commonly held to have been created from the division of the Roman army in 364 between emperors Valens and Valentinian I. The seniores are the "senior" Western units, while iuniores their "junior" Eastern counterparts.

Middle Byzantine period, 8th–11th centuries: the scholae as one of the tagmata

For more details on this topic, see Tagma (military).

The scholae, along with the excubitores, continued to exist in the 7th and early 8th centuries, although diminished in size, as purely ceremonial units. However, in ca. 743, after putting down a major rebellion of thematic troops, Emperor Constantine V (r. 741–775) reformed the old guard units of Constantinople into the new tagmata regiments, which were meant to provide the emperor with a core of professional and loyal troops.[15] The tagmata were professional heavy cavalry units, garrisoned in and around Constantinople, forming the central reserve of the Byzantine military system and the core of the imperial expeditionary forces. In addition, like their Late Roman ancestors, they were an important stage in a military career for young aristocrats, which could lead to major field commands or state offices.[16]

The exact size of the tagmata is a subject of debate. Estimates range from 1,000[17] to 4,000[18] men. The various tagmata had a uniform structure, differing only in the nomenclature used for certain titles, which reflected their different ancestries. The scholai were headed by the domestikos tōn scholōn (δομέστικος τῶν σχολῶν, "Domestic of the Schools"), first attested in 767.[19] As the old office of the magister officiorum was transformed into the more or less ceremonial post of magistros, the domestikos was established as the independent commander of the scholai. In contemporary histories, he holds the rank of patrikios, and is considered as one of the senior-most generals, surpassed only by the strategos of the Anatolic Theme.[20] By the 10th century, he had risen to be the senior officer of the entire army, effectively a commander-in-chief under the Emperor. In ca. 959, the post and the unit itself were divided into two separate commands, one for the East (domestikos [tōn scholōn tēs] anatolēs) and one for the West (domestikos [tōn scholōn tēs] dyseōs).[21]

The domestikos tōn scholōn was assisted by two officers called topotērētēs (τοποτηρητής, lit. "placeholder", "lieutenant"), who each commanded half of the unit, a chartoularios (χαρτουλάριος, "secretary") and the proexēmos or proximos (head messenger).[22] The tagma was further divided into smaller units (banda, sing. bandon) commanded by a komēs (κόμης [τῶν σχολῶν], "Count [of the Schools]"). In the late 10th century, there were 30 such banda, of unknown size.[23] Each komēs commanded 5 junior domestikoi, the equivalent of regular army kentarchoi ("centurions").[24] There were also 40 standard-bearers (bandophoroi), who were grouped in four different categories. In the scholai, these were: protiktores (προτίκτορες, "protectors", deriving from the older protectores), eutychophoroi (εὐτυχοφόροι, "carriers of eutychia"; here eutychia is a corruption of ptychia, images of Fortune and Victory), skēptrophoroi ("bearers of sceptres", i.e. staves with images on top) and axiōmatikoi ("officers").[25][26]

The kandidatoi are still mentioned in the 10th-century work De Ceremoniis, but the title had become nothing more than a palace dignity, fulfilling a purely ceremonial role and entirely separate from the tagma of the scholai.