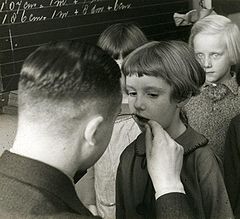 School health and nutrition services are services provided through the school system to improve the health and well-being of children and in some cases whole families and the broader community. These services have been developed in different ways around the globe but the fundamentals are constant: the early detection, correction, prevention or amelioration of disease, disability and abuse from which school aged children can suffer.

It was shown by statistics that many pupils were behind in their studies only because of lack of physical vitality.[1] In 1920, it was shown that so many pupils in the schools of Brooklyn, New York, were compelled to pass through the same grades twice that, at the average cost of $40 a term for each pupil, the borough lost $2,000,000. On this basis various social organizations demanded an appropriation from the city of $100,000 for more effective medical aid to the school children, contending that more than half of the extra expense could thus be saved. Out of 252,000 school-children inspected in New York City in 1919, 74% were found defective physically, defective teeth and vision being the chief faults.[1]

Unesco has published a set of tools, to support the FRESH framework, to guide those wishing to set up school health services around the world. Designed primarily for developing nations, these tools can be of universal use [1]. The main emphasis of these tools is on:

School health services are well developed in the United States. Central guidelines are provided by Making Health Academic but each state and within that each school board has adopted its own specific methods.

This is a five-year project funded by CDC's Division of Adolescent and School Health (DASH) designed to enable all schools to be part of a co-ordinated school health program. The project is built around the fact that six preventable behaviours, mainly learned in childhood and youth, account for most of the serious illnesses and premature deaths in the United States; these are:[2]

The health of children and youth in the UK is mainly the responsibility of the NHS, for example child health screening [5] and advice for parents of overweight children [6]. School based services are therefore more limited than in the US.

Indicators of school health in Morocco are troublesome. A recent article by the European Institute of Health Sciences (Institut Européen des Sciences de la Santé) in Casablanca noted that:

School health systems are expanding in low- and middle-income countries. Information on school health in these countries is collated on the Schools and Health website [10] maintained by the Partnership for Child Development. A database of School Health and Nutrition (SHN) Programmes in low and middle income countries can be found on the site: