The Schwarzenau Brethren, or German Baptist Brethren as it is known in America, originated in Germany, the outcome of the Radical Pietist ferment of the late 17th and early 18th centuries. Hopeful of the imminent return of Christ, the founding Brethren abandoned the established Reformed and Lutheran churches, forming a new church in 1708 when their apocalyptic hopes were still unfulfilled. They thereby attempted to translate "the Philadelphian idea of love into concrete congregational ordinances obligatory for all the members."[1] Unlike the Philadelphians, Brethren rejected Leade's embrace of direct revelation and emphasized early ("Apostolic" or "primitive") Christianity as the binding standard for congregational practices. The founding Brethren were also in conversation with Mennonites and influenced by Anabaptist writings.

In Germany the Brethren became known as Neue Täufer (New Baptists), in distinction from the older Baptist groups with which they had no formal ties. In the United States they became popularly known as Dunkers, Dunkards or Tunkers, forms that stem from the German verb tunken (Pennsylvanian German dunke), to dip, to immerse. Another religious group related historically to the same Radical Pietist ferment as the Brethren is the Community of True Inspiration.

The Schwarzenau Brethren was first organized in 1708 under the leadership of Alexander Mack (1679–1735) in Schwarzenau, Germany, now part of Bad Berleburg in North Rhine-Westphalia. They believed that both the Lutheran and Reformed churches were taking liberties with the "true" Christianity revealed in the New Testament, so they rejected established liturgy, including infant baptism and existing Eucharistic practices. The founding Brethren were broadly influenced by Radical Pietist understandings of an invisible, (nondenominational) church of awakened Christians who would fellowship together in purity and love, awaiting Christ's return.

A notable influence was Ernest Christopher Hochmann von Hochenau, a traveling Pietist minister. While living in Schriesheim, his home town, Mack invited Hochmann to come and minister there. Like others who influenced the Brethren, Hochmann considered the pure church to be spiritual, and did not believe that an organized church was necessary. By 1708, the date of the first Brethren baptisms, Mack had rejected this position in favor of forming a separate church with visible rules and ordinances—including threefold baptism by immersion, a Love Feast (that combined communion with feetwashing and an evening meal), anointing, and use of the "ban" against wayward members.

Religious persecution drove the Brethren to take refuge in Friesland, in the Netherlands. In 1719 Peter Becker brought a group to Pennsylvania. In 1720 forty Brethren families settled in Surhuisterveen in Friesland. They settled among the Mennonites and remained there until 1729, when all but a handful emigrated to America, in three separate groups from 1719 to 1733.

Peter Becker organized the first American congregation at Germantown, Pennsylvania, on December 25, 1723. In 1743 Christopher Sauer, an early pastor and a printer by trade, printed a Bible in German, the first published in a European language in North America.

In 1782 the Brethren forbade slaveholding by its members. In 1871 these Brethren adopted the title German Baptist Brethren at their Annual Meeting. The group continued to expand and from Pennsylvania, they migrated chiefly westward. By 1908 they were most numerous in Pennsylvania, Maryland, Virginia, Ohio, Indiana, Illinois, Iowa, Missouri, Nebraska, Kansas and North Dakota. 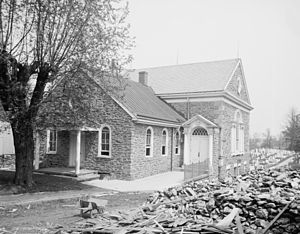 Brethren emphasize simplicity and humility in their life, including their architecture—as exemplified by this simple church built by Dunkers in Germantown, Philadelphia, pictured c. 1905.

The beliefs of the Schwarzenau Brethren include triune baptism, which provides that the candidate kneel in water and be immersed, face first, three times in the name of God the Father, the Son and the Holy Spirit; the New Testament as the infallible guide in spiritual matters; communion service celebrated in the evening, accompanied by the love feast; the ceremony of the washing of feet; the salutation of the Holy kiss; prayer and anointing with oil over the sick; and nonresistance. See also The Brethren Card.

Many of the early Schwarzenau Brethren believed in universal restoration, a variant of universal salvation that foretold that after the judgment and harsh punishment described in the New Testament, God's love would one day restore all souls to God. Brethren typically kept this teaching to themselves, and it was largely abandoned by the late nineteenth century.[2] They were among the first to take Christian universalism to America when they emigrated there.[3]

The church leaders are ministers, teachers, and deacons, though the positions may vary slightly in the various branches. The official role of elder, while no longer recognized in most congregations, was the most respected position in the church. Ministers and deacons are elected by the members of the congregation in which they hold membership. Ministers preach the word, baptize, assist deacons in anointing, solemnize marriages, and officiate at communion. Deacons serve the church by arranging for visitation to members or their families during illness or crisis, and often function in the capacity of stewards.

The first schism from the general body of German Baptist Brethren occurred in 1728, but more followed after the American Revolution, as different groups sought their own ways. The first separatists became the Seventh Day Dunkers, whose distinctive principle was that they believed that Saturday was true Sabbath. They were founded by Johann Conrad Beissel (1690–1768).

In 1732, Beissel-led establishment of a semi-monastic community with a convent and a monastery at Ephrata, in what is now Lancaster County, Pennsylvania. While celibate, the community also welcomed believing families; they lived nearby and participated in joint worship. The monastic feature and celibacy were gradually abandoned after the American Revolution.

In 1814 the Society was incorporated as the Seventh Day German Baptist Church. Several branches were established, some of which still exist.[4] A group called the Church of God or "New Dunkers" withdrew in 1848. They disbanded in August 1962.

In 1882 the Progressives, who stressed evangelism and objected to distinctive dress and strong Annual Meeting authority, formed The Brethren Church at the time of H. R. Holsinger.

Because of what some believed was a gradual drift away from apostolic standards, in 1926 a small group of conservatives withdrew from the Church of the Brethren and formed the Dunkard Brethren Church.

In 1992, because of doctrinal disagreements within the FGBC (primarily related to the connection between water baptism and church membership), the Conservative Grace Brethren Churches, International (CGBCI) was formed. It has no centralized headquarters at this time.

In total, in the 21st-century United States, seven or eight evangelical Protestant groups survive that descended from the 18th-century Schwarzenau Brethren of Germany.

As of 2003, six Brethren bodies meet together in the Brethren World Assembly: Church of the Brethren, Conservative Grace Brethren Churches, International, Dunkard Brethren, Fellowship of Grace Brethren Churches, Old German Baptist Brethren, and The Brethren Church. The first Assembly was held in Pennsylvania in 1992. They met at Elizabethtown College and celebrated the 250th anniversary of the first known Brethren Annual Meeting in 1742. That first meeting gathered near Conestoga in Lancaster County, Pennsylvania. The second Assembly met in 1998 at Bridgewater College in Bridgewater, Virginia. The third Assembly was held by Grace College in Winona Lake, Indiana, in 2003. The Assembly represents some 600,000 members around the world.

Brethren are noncreedal, but have summarized their beliefs in a variety of ways for the purpose of evangelical outreach. One such statement, developed during the late nineteenth century was the Brethren's Card, a version of which was endorsed for general distribution by the 1923 Church of the Brethren Annual Conference. Variations on the Card were used by both the Old German Baptist Brethren and the Church of the Brethren.[5] This is an early version that was widely circulated:[6]

Be it known unto all men,

The 1923 version, influenced by both increasing formalism and the Fundamentalist Christianity of the 1910s differed in both tone and content:[7]

This version was officially circulated by the Church of the Brethren in its publications until the middle part of the twentieth century, and it continues to be issued through the efforts of Brethren Revival Fellowship.

The teachings of some other groups are similar to this, but can differ widely in emphasis and scope. For example, the Grace Brethren are varied on the requirement of triune immersion, do not practice the Christian salutation, do not oppose war, and do not formally adhere to plain dress or modesty. Only the Conservative Grace Brethren Churches have retained a published use of the motto, "The Bible, the whole Bible, and nothing but the Bible".

Most Brethren groups maintain that the Bible is the sole authority and will revise their statement of faith if they perceive any difference between it and sound Biblical doctrine. Some of the Old Order groups incorporate church authority as a mechanism for unifying the interpretation and application of Biblical teachings.