From Infogalactic: the planetary knowledge core
Jump to: navigation, search
For other uses, see Schwerin (disambiguation). 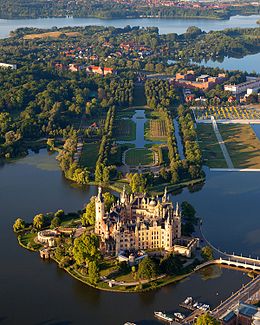 Schwerin ([ʃvɛˈʁiːn] or [ʃvəˈʁiːn], Mecklenburgian Swerin, Latin Suerina) is the capital and second-largest city of the northern German state of Mecklenburg-Vorpommern. The population is 91,583 (as of December 31, 2013).

Schwerin was first mentioned in 1018 and was granted city rights in 1160, thus it is the oldest city of Mecklenburg-Vorpommern. It is known for its romantic Schwerin Palace, crowning an island in the Lake Schwerin. The city also has a largely intact old town, thanks to only minor damage in World War II.

Schwerin is located within the metropolitan region of Hamburg and close to that of Berlin, and to nearby regiopolises of Rostock and Lübeck.

Schwerin is surrounded by lakes. The largest of these lakes, the Schweriner See, has an area of 60 km2. In the midst of these lakes there was a settlement of the Slavic Obotrite (dated back to the 11th century). The area was called Zuarin (Polabian Zwierzyn), and the name Schwerin is derived from that designation. In 1160, Henry the Lion defeated the Obotrites and captured Schwerin. The town was subsequently expanded into a powerful regional centre. A castle was built on this site, and expanded to become a ducal palace. It is supposedly haunted by the small, impious ghost, called Petermännchen ("Peterman").

In the mid-1800s, many residents from Schwerin moved to the United States, many to Milwaukee, Wisconsin. Today Milwaukee and Schwerin are sister cities.

After 1918, and during the German Revolution, resulting in the fall of all the German monarchies, the Grand Duke abdicated. Schwerin became capital of the Free State of Mecklenburg-Vorpommern thereafter.

At the end of World War II, on 2 May 1945, Schwerin was taken by U.S. troops. It was turned over to the British on 1 June 1945, and one month later, on 1 July 1945,[2] it was handed over to the Soviet forces, as the British and American forces pulled back from the line of contact to the predesignated occupation zones. Schwerin was then in the Soviet Occupation Zone which was to become the German Democratic Republic (GDR). Initially, it was the capital of the State of Mecklenburg which at that time included the western part of Pomerania (Vorpommern). After the states were dissolved in the GDR, in 1952, Schwerin served as the capital of the Schwerin district (Bezirk Schwerin).

After reunification in 1990, the former state of Mecklenburg-Vorpommern was recreated as one of the Bundesländer. Rostock was a serious contender for state capital but the decision went in favour of Schwerin.

City buses and trams are run by NVS (Nahverkehr Schwerin).[3]

Schwerin Hauptbahnhof (central station) is connected by rail to Berlin, Hamburg and Rostock.