Scioto County is a county located in the south central region of the U.S. state of Ohio. As of the 2010 census, the population was 79,499.[2] Its county seat is Portsmouth.[3] The county was founded March 24, 1803 from Adams County and is named for an Indian word referring to deer or deer-hunting.[4]

Scioto County comprises the Portsmouth, OH Micropolitan Statistical Area, which is also included in the Charleston-Huntington-Ashland, WV-OH-KY Combined Statistical Area. It is located at the confluence of the Scioto and Ohio rivers.

It is the childhood home of former Ohio governor Ted Strickland.[5]

Portsmouth is the county seat for Scioto County with the county courthouse located at the corner of Sixth and Court streets. It was constructed in 1936.

The county jail, once located in the courthouse, is now located in a new facility in the same location where the Norfolk and Western rail depot used to stand near U.S. 23. It was constructed in 2006.

Scioto County is the home of the Southern Ohio Correctional Facility, which is located in Lucasville. The facility is Ohio's only maximum security prison and the location of Ohio's death house where death row inmates are executed.

The county maintenance garage is located in Lucasville.

Scioto County's economy has come and gone with the success and failures of Portsmouth's economy. Until the 1970s, heavy industry such as steel mills and shoe factories drove the county's economy. Since the closure of these factories, Scioto County has suffered a loss of jobs and revenue. Today, the service industry such as the Southern Ohio Medical Center is the largest employer in the county. Scioto County is also home to the newest state university in Ohio, Shawnee State University. Shawnee State enrolls between 3,300 and 4,000 students and grants associate, baccalaureate and master's degrees. Much of the recent economic growth and change is based on service to SOMC and Shawnee State University. Recently Infra-Metals announced the fabrication of a new steel shipping/fabrication site in New Boston, Ohio in the Bob Walton Industrial Park. This plant is under construction and will have access to both barge and rail loading facilities.

In November 2002, the Portsmouth Uranium Enrichment Plant in nearby Piketon was recognized as an ANS Nuclear Historic Landmark by the American Nuclear Society. It had served a military function from 1952 until the mid-1960s when the mission changed from enriching uranium for nuclear weapons to one focused on producing fuel for commercial nuclear power plants. The Portsmouth Uranium Enrichment Plant ended enriching operations in 2001 and began to support operational and administrative functions and perform external contract work. All uranium enrichment in the area has been taken over by a sister plant located in Paducah, Kentucky. Uranium enrichment functions had previously been shared by the two plants. USEC interests in the area remain strong with the American Centrifuge Plant under construction in Piketon. This commercial uranium enrichment facility is expected to employ up to 500 people and reach an initial annual production level of 3.5 million SWU by 2010.

Scioto County has also been the benefactor of Suncoke (coke (fuel) production) and Duke Energy (electricity) facilities near Franklin Furnace. Sole Choice, Inc., the largest manufacturer of shoelaces in the world, is located in the county. Graf Brothers Flooring and Lumber, the world's largest manufacturer[citation needed] of rift and quartered oak products, has two satellite log yards in the county, with the company's main office being located across the river in South Shore, Kentucky.

Scioto County used to be home to Ohio University Southern Campus; however, it moved to Lawrence County (Ironton) in the early 1980s. The former Ohio University buildings became home to Shawnee State University, which was founded in 1986 as Ohio's thirteenth and newest institution, after first becoming Shawnee State Community College. Scioto County is also home to Daymar College, which has in excess of 300 students (summer 2010).

The Portsmouth Public Library, a Carnegie library, and its five branches have served the county since 1879. The library has branches in Lucasville, New Boston, McDermott, South Webster and Wheelersburg. 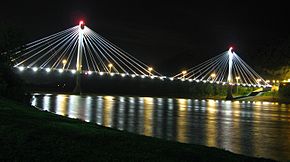 A nighttime view of the newly built U.S. Grant Bridge carrying U.S. 23 over the Ohio River into downtown Portsmouth from Kentucky

Norfolk Southern offers a railyard for long distance shipping and is currently reopening the repair shops. Amtrak offers a passenger service to the Portsmouth/Scioto County area under the Cardinal route. The passenger station is located in South Shore, Kentucky, across the Ohio River.

Scioto County is a dividing line of numerous television markets, which includes the Columbus, Cincinnati and Huntington-Charleston markets. Local television stations include: WSAZ-NBC,(channel 3.1) WZAS-myNetwork (myZtv channel 3.2), WOWK-CBS (channel 13.1), WCHS-ABC (channel 8.1)and WQCW, a CW affiliate with an office in Portsmouth and Charleston, and more recently WTZP "The Zone" which is an America One Affiliate that offers a larger amount of local programming such as news, high school spots, community events and locally produced shows about the area. Local radio stations WIOI, WNKE, WNXT, and WZZZ serve the radio listeners in the county and surrounding areas.

The county is also served by three newspapers. The Portsmouth Daily Times is the county's only daily newspaper. The Community Common is a free bi-weekly newspaper and the Scioto Voice is a weekly newspaper, which is mailed to subscribers. The University Chronicle is the student-led newspaper at Shawnee State University.

Of the media mentioned only three are actually locally owned and operated. They are WTZP in television, WIOI in radio and The Scioto Voice in newspaper.

Shawnee State University (SSU) is a member of the National Association of Intercollegiate Athletics (NAIA-Division II). SSU has participated in 24 National Championships in 6 of 11 sponsored sports. The university's women's basketball team has won an NAIA National Title in 1999 and finished in the final four in 1995.[21] The softball team has had national exposure as well, reaching the "Sweet 16" on several occasions. The team finished 10th in 1992, 8th in 1995, 9th in 1996, and 9th in 2001.[22]

The twelve local high schools, the other educational institutions, the adult leagues, and the development leagues (e.g. AAU and club organizations) generate a great deal of participation as either participants or as followers of sports' teams. The teams have made 55 trips to the Ohio High School Athletic Association championships, winning 15 state titles. These have included three softball titles by Clay HS (1980, 1981, & 1983); three baseball titles (East HS in 1973, Valley HS in 1975, and Wheelersburg HS in 1996); three football titles (two by Notre Dame HS in 1967 and 1970 and Wheelersburg HS in 1989); and six boys' basketball titles (1931, 1961, 1978, and 1988 by Portsmouth HS and 2006 by South Webster HS).[23][24]

Scioto County is best known for Portsmouth's "River Days" activities that include a parade, a pageant associated with the local high schools, boat races on the Ohio River (in the past), musical performances and a carnival. River Days occurs on Labor Day (the first Monday of September) weekend with the activities beginning on Thursday evening and the parade and pageant on Saturday.

The Scioto County Fair is held on the first full week of August of each year. It is one of the largest in the state, drawing approximately 75,000 visitors each year (with the single-day record being 17,000).[25] The first county fair was held in 1828;[26] in 1908 Lucasville became the official site when three fairs (Mount Joy, Portsmouth and Lucasville) merged into one.[27] The Roy Rogers' Homecoming Festival is held each June, and the county has numerous fireworks displays on the 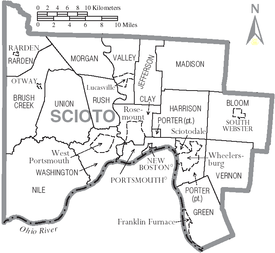 Map of Scioto County, with municipal and township labels