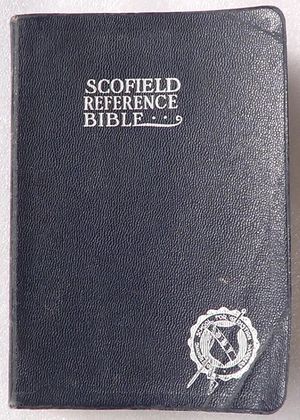 Cover of a 1917 edition of the Scofield Bible presented as a gift in 1941.
File:ScofieldBible.jpg
Scofield Reference Bible, page 1115. This page includes Scofield's note on John 1:17, which some have interpreted to mean that Scofield believed in two means of salvation.

The Scofield Reference Bible is a widely circulated study Bible edited and annotated by the American Bible student Cyrus I. Scofield, which popularized dispensationalism at the beginning of the 20th century. Published by Oxford University Press and containing the entire text of the traditional, Protestant King James Version, it first appeared in 1909 and was revised by the author in 1917.[1]

The Scofield Bible had several innovative features. Most important, it printed what amounted to a commentary on the biblical text alongside the Bible instead of in a separate volume, the first to do so since the Geneva Bible (1560).[2] It also contained a cross-referencing system that tied together related verses of Scripture and allowed a reader to follow biblical themes from one chapter and book to another. Finally, the 1917 edition also attempted to date events of the Bible. It was in the pages of the Scofield Reference Bible that many Christians first encountered Archbishop James Ussher's calculation of the date of Creation as 4004 BC; and thorough discussion of Scofield's notes, which advocated the "gap theory," fundamentalists began a serious internal debate about the nature and chronology of creation.[3]

The Scofield Bible was published only a few years before World War I, a war that destroyed the cultural optimism that had viewed the world as entering a new era of peace and prosperity; then the post-World War II era witnessed the creation in Israel of a homeland for the Jews. Thus, Scofield's premillennialism seemed prophetic. "At the popular level, especially, many people came to regard the dispensationalist scheme as completely vindicated."[4] Sales of the Reference Bible exceeded two million copies by the end of World War II.[5] The Scofield Reference Bible promoted dispensationalism, the belief that between creation and the final judgment there would be seven distinct eras of God's dealing with man and that these eras are a framework for synthesizing the message of the Bible.[6] It was largely through the influence of Scofield's notes that dispensationalism grew in influence among fundamentalist Christians in the United States. Scofield's notes on the Book of Revelation are a major source for the various timetables, judgments, and plagues elaborated on by popular religious writers such as Hal Lindsey, Edgar C. Whisenant, and Tim LaHaye;[7] and in part because of the success of the Scofield Reference Bible, twentieth-century American fundamentalists placed greater stress on eschatological speculation. Opponents of biblical fundamentalism have criticized the Scofield Bible for its air of total authority in biblical interpretation, for what they consider its glossing over of biblical contradictions, and for its focus on eschatology.[8]

The 1917 Scofield Reference Bible notes are now in the public domain, and the Bible is "consistently the best selling edition of the Scofield Bible" in the United Kingdom and Ireland.[9] In 1967, Oxford University Press published a revision of the Scofield Bible with a slightly modernized KJV text, and a muting of some of the tenets of Scofield's theology.[10] Recent editions of the KJV Scofield Study Bible have moved the textual changes made in 1967 to the margin.[11] The Press continues to issue editions under the title Oxford Scofield Study Bible, and there are translations into French, German, Spanish, and Portuguese. For instance, the French edition published by the Geneva Bible Society is printed with a revised version of the Louis Segond translation that includes additional notes by a Francophone committee.[12] In the 21st century, Oxford University Press published Scofield notes to accompany six additional English translations.[13]