The Scotland Office (An Oifis Albannach in Scottish Gaelic) is a UK Government Department headed by the Secretary of State for Scotland and responsible for Scottish affairs. Its role combines with that of the Ministry of Justice in HM Government.[2]

The office is responsible for the representation of Scotland and Scottish affairs in HM Government, facilitating the smooth operation of devolution, liaising between the UK Government and the Scottish Government at Edinburgh and the administering of certain reserved matters of government relating to Scotland.

Until the advent of the Scottish Parliament and the devolved Scottish Government, the precursor to the Scottish Office was a major UK Government Department dealing with most aspects of the domestic governance of Scotland, a position known as "administrative devolution". Since devolution its powers are limited to those relating to reserved matters that are not dealt with by other departments of HM Government and it, along with the Wales Office, was then absorbed into the Department for Constitutional Affairs (DCA), which in turn became the Ministry of Justice. The Secretary of State for Scotland also holds certain powers of oversight over the operation of the Scottish Parliament under the Scotland Act 1998.

On the 21st of October 2015, the Scotland Office re-branded their facebook profile to 'UK Government for Scotland.'[3]

The Scotland Office Ministers are as follows:[4]

Under the Blair Ministry and Brown Ministry, the office of Secretary of State for Scotland was often held along with another Secretariat of State by a member of the Cabinet:

Danny Alexander was briefly the first Secretary of State in the Cameron Ministry (in May 2010), prior to his appointment as Chief Secretary to the Treasury, succeeding David Laws.

Michael Crockart (a Liberal Democrat MP) resigned his post as Parliamentary Private Secretary to the Secretary of State on 9 December 2010 over the United Kingdom Government's plan for an increase in tuition fees. 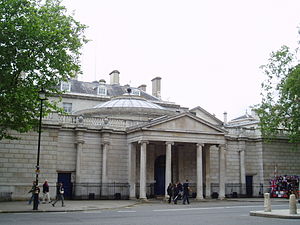 Dover House, the headquarters of the Scotland Office in Whitehall.

The governmental department is based at Dover House, Whitehall and engages around 40 permanent staff. Dover House also serves as a base for staff of the Scottish Government in London.

There is also an office of the department located in Melville Crescent, Edinburgh.

The Advocate General, who is a Crown Law Officer, shares the same offices in London and Edinburgh.