The Scottish Ambulance Service (Scottish Gaelic: Seirbheis Charbadan-eiridinn na h-Alba) is part of NHS Scotland, and serves all of Scotland. It is a special health board funded directly by the Health and Social Care Directorates of the Scottish Government.

The two main functions of the trust are the provision of a paramedic-led accident and emergency service to respond to 999 calls and the patient transport service (non-emergency service), which performs the role of taking patients to and from their hospital appointments, discharges from hospital and non-urgent transfers.

St. Andrew's First Aid, which is the trading name of St. Andrew's Ambulance Association, continues as a voluntary organisation.

In 2003 there was a reorganisation of the ambulance control centres across Scotland, with eight being merged into three.[1]

In 1992, the uniform changed to a boiler-suit type uniform, to reflect the practicalities of providing front-line emergency care; and eventually a very similar trouser / shirt combination. These uniforms were an irish green colour for Emergency staff and a light blue shade for Patient Transport staff.

In 2013/2014, the uniform was again changed to mirror the NHS National Uniform standard. It is now supplied by Dimensions and is broadly similar to all other Ambulance Services in the UK; a dark green trouser / shirt combination with associated PPE. All staff, including control centre staff, now wear the national uniform unless otherwise authorised.

The national headquarters are in west side of Edinburgh and there are five divisions within the Service, namely: 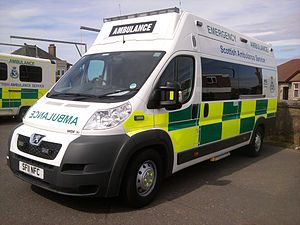 A New Peugeot Boxer ambulance of the Scottish Ambulance Service 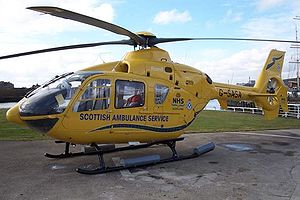 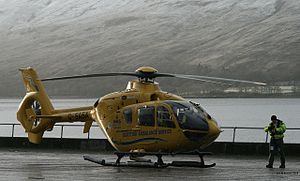 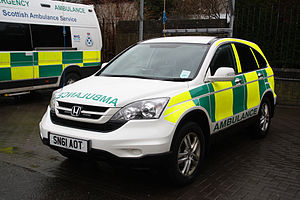 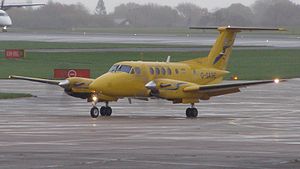 The Patient Transport Service carries almost 1.6 million patients every year. This service is provided to patients who are physically or medically unfit to travel to hospital out-patient appointments by any other means can still make their appointments. The service also handles non-emergency admissions, discharges, transport of palliative care patients and a variety of other specialised roles.

Patient Transport Vehicles come in a variety of forms and are staffed by Ambulance Care Assistants, whom work either double or single crewed. They are trained to look after patients during the journey, and to provide basic emergency care.

The service has the only government-funded air ambulance service in the UK,[7] operated under contract by Gama Aviation. The fleet consists of two Eurocopter EC-145 helicopters (operated under sub-contract by Bond Air Services) and two Beechcraft B200C King Air fixed-wing aircraft, which provide emergency response and transfers of patients to and from remote areas of Scotland. In 2013/14, the air ambulance service flew 3,427 missions. One helicopter is based at Glasgow City Heliport, while the other operating base is Inverness Airport; one King Air is based at Aberdeen Airport, the other at Glasgow Airport.[8]

In June 2012 the result of a tender process for a new seven-year air ambulance contract was announced.[9] Commencing in April 2013, the winning tenderer Gama Aviation will continue to provide two rotary- and two fixed-wing aircraft on a 24-hour basis throughout Scotland.

The aircraft based in Glasgow are regularly used by the UK's only Emergency Medical Retrieval Service. The air ambulance service was occasionally featured as part of the popular Channel 5 television documentary series Highland Emergency.

In late 2012 a charity was founded to provide a further air ambulance to work alongside the state-funded aircraft.[10] Scotland's Charity Air Ambulance commenced operations in 2013 and operates a Eurocopter EC-135 helicopter crewed by Scottish Ambulance Service paramedics. The aircraft is based at Perth Airport and tasking is from the SAS ambulance control centre at Cardonald.

Special Operations Response Teams (SORT) have been set up in the North, East and West of Scotland to respond to major incidents including Nuclear, Chemical and Radiological ones. These teams have specially equipped vehicles with decontamination equipment on board.

The Scottish Ambulance Service operates three Ambulance Control Centres (previously known as EMDCs until June 2012) which provide command & control and 999 call taking facilities for the Service; these are located in Cardonald, South Queensferry and Inverness. These centres operate 24 hours per day 365 days per year and are staffed by Emergency Call Handlers, Emergency Medical Dispatchers and Clinical Advisors.[11] All requests for an ambulance are prioritised using software called the Advanced Medical Priority Dispatch System (AMPDS) and a response is generated according to clinical need. Responses can be in the form of an ambulance, a Paramedic Response Unit, a BASICS Doctor, Emergency Medical Retrieval Service, an Ambulance Officer or a Community First Responder.

The Service has its own dedicated training academy within the campus of Glasgow Caledonian University. The facility has purpose built classrooms, lecture theatres, syndicate rooms and a clinical simulation area that recreates a 16-bed hospital ward and Accident & Emergency department allowing realistic interaction with other trainee healthcare professionals.[12]

Prior to April 2011, the service used its own dedicated training college located at Barony Castle in Eddleston near Peebles. Set in 25 acres (100,000 m2) of formal gardens and woodlands, Barony was a residential training and conference centre with 78 bedrooms that allowed the service to carry out all its training in house.

The ambulances have been painted white since the formation of the Scottish Ambulance Service. The original colour of white was a cream white called "Ambulance White" this has now been replaced by a brighter "Titanium" White. The ambulances originally carried a blue stripe of the sides with "Scottish Ambulance Service" in yellow lettering. The livery was changed to yellow fluorescent stripes sometime between 1986 and 1992. The current livery with Battenburg markings was introduced in 2002.

Other Scottish emergency and non-emergency services: