The Scottish Fire and Rescue Service (SFRS; Scottish Gaelic: Seirbheis Smàlaidh agus Teasairginn na h-Alba) is the national fire and rescue service of Scotland. It was formed as the result of an amalgamation of eight regional fire services, which came into effect on 1 April 2013.[1] It therefore became the largest fire service in the United Kingdom and the fourth-largest in the world, surpassing the London Fire Brigade.[2]

After a consultation,[3] the Scottish Government confirmed on 8 September 2011[4] that a single fire and rescue service would be created in Scotland to replace the eight existing services.

Following further consultation[5] on the detailed operation of the service, the Police and Fire Reform (Scotland) Bill was published on 17 January 2012.[6] After scrutiny and debate by the Scottish Parliament, the legislation was approved on June 27, 2012.[7] The Bill duly received royal assent as the Police and Fire Reform (Scotland) Act 2012. This Act also created Police Scotland in place of the previous eight regional police forces.

The current Scottish Fire and Rescue Service headquarters are in Cambuslang, which also houses a state-of-the-art national training centre (opened in January 2013). There are a further three service delivery HQs in the east, west and north of the country.[8]

On 16 August 2012 the Scottish Government confirmed the first Chief Officer of the new service would be Alasdair Hay, acting Chief Fire Officer of Tayside Fire and Rescue Service, following an open recruitment exercise.[9]

Pat Watters, former President of COSLA, was also announced as Chair of the Scottish Fire and Rescue Service, an appointment to run for three years from September 2012.[10] 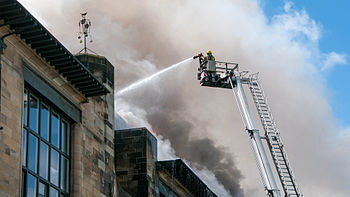 As well as fighting fire, the service attends tens of thousands of specialist services such as road traffic incidents, water rescue and flooding incidents. In 2014-15 it attended 10,740 non-fire related emergency incidents.[12]

The service works alongside other emergency services during flooding events to ensure the safety of communities and rescue people in difficulty, with specialist swift water rescue teams positioned on major waterways and areas of activity. Firefighters are routinely called out to water, flood and boat rescues. 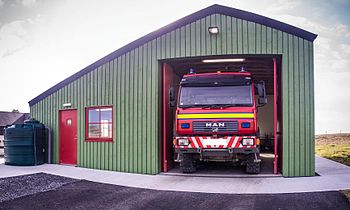 During Storm Frank in December 2015 the SFRS received 350 flood related calls in the space of six days.[13]

In 2015 the SFRS were called out to 78 wildfire incidents in total, with over half of those taking place in the North of Scotland.[12]

Out of hospital cardiac arrest

In 2015 a national trial was launched, in partnership with the Scottish Ambulance Service, which has seen firefighters receive enhanced CPR training aimed at increasing survival rates for people who suffer out of hospital cardiac arrests.[14]

As of March 2016, the SFRS operates from a total of 356 stations throughout Scotland. Stations are split into three categories: 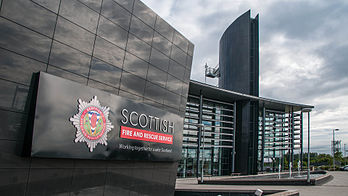 Wholetime: A station with full-time firefighters.

Retained: Part time, on a call out basis and predominantly based in some of the more rural areas of Scotland.

Volunteer: On a call out basis and predominantly based in some of the more remote villages and islands within Scotland.

The most northerly station is Baltasound Fire Station on the Shetland Islands. The most southerly is a volunteer station in the village of Drummore in Dumfries and Galloway.

The Scottish Fire and Rescue Service National Training Centre opened in January 2013. The facility in Cambuslang features a mock town with ultra-realistic motorways, rail tracks and buildings, including a multi-storey tenement structure.[15]

The following services were merged, creating the Scottish Fire and Rescue Service: