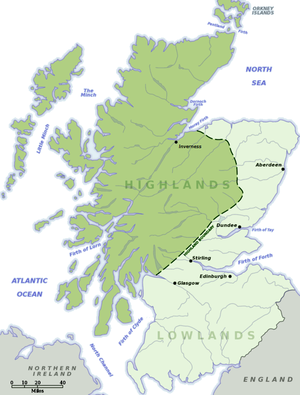 A map showing the Scottish Lowlands in light green, while the Scottish Highlands are shown in a darker shade of green.

The Lowlands (Scots: the Lallanscode: sco is deprecated or the Lawlands; Scottish Gaelic: a' Ghalldachd, "the place of the foreigner") are a cultural and historic region of Scotland.

The Lowlands is not an official geographical or administrative area of the country. There are two main topographic regions: the Midland Valley (or Central Lowlands) and the Southern Uplands. The term "Lowlands" mainly refers to the Midland Valley. However, in normal usage it refers to those parts of Scotland not in the Highlands (or Gàidhealtachd). The boundary is usually considered to be a line between Stonehaven and Helensburgh (on the Firth of Clyde). The Lowlands lie south and east of the line. Note that some parts of the Lowlands (such as the Southern Uplands) are not physically 'low', and some areas indisputably in the Highlands (such as Islay) are low-lying.

In geological terms, the dividing line between Lowlands and Highlands is the Highland Boundary Fault. There was also a legally defined Highland Line in the post-Culloden years, part of the measures taken to suppress Gaelic culture.

For other purposes, the boundary varies; but if the Boundary Fault is used, then the traditional Scottish counties entirely in the Lowlands are: Ayrshire, Berwickshire, Clackmannanshire, Dumfriesshire, East Lothian,[1] Fife, Kinross-shire, Kirkcudbrightshire, Lanarkshire, Mid-Lothian,[2] Peeblesshire, Renfrewshire, Roxburghshire, Selkirkshire, West Lothian[3] and Wigtownshire.

Geographically, Scotland is divided into three distinct areas: the Highlands, the Central plain (Central Belt), and the Southern Uplands. The Lowlands cover roughly the latter two. The northeast plain is also "low-land," both geographically and culturally, but in some contexts may be grouped together with the Highlands.

The term Lowlands is sometimes used in a more restricted sense to refer specifically to the Midland Valley. Much of this area, which has a characteristic structure of sedimentary rocks with coal deposits, lies within the basins of the Rivers Forth and Clyde. Historically, this valley has been the most agriculturally productive region of Scotland. During the 19th and early 20th centuries, coal deposits promoted concentrated industrial activity and urbanization in the Midland Valley, where 80 percent of the population of Scotland now live. While coal mining and heavy industry have declined in the region, it remains at the centre of the Scottish economy, with electronics and computer manufacture and service sectors such as telecommunications, computer software, and finance.

The southernmost counties of Scotland, nearest the border with England, are also known as the Borders. They are sometimes considered separately from the rest of the Lowlands. Many ancestors of the Scotch-Irish, as they are known in the United States, or Ulster-Scots, originated from the lowlands and borders region before migrating to the Ulster Plantation in the 17th century and later the American frontier, many prior to the American Revolution.