Founded as members of the International League (IL) in 1989, the team was known as the Scranton/Wilkes-Barre Red Barons from 1989 to 2006 and the Scranton/Wilkes-Barre Yankees from 2007 to 2012. They became the RailRiders in 2013. During their membership in the IL, they won two Governors' Cup championships and one Triple-A National Championship. They became members of the Triple-A East in 2021. Since 2012, the team is owned by SWB Yankees LLC and was previously owned by the Lackawanna County Stadium Authority.

The team arrived in Lackawanna County in 1989 from Old Orchard Beach, Maine where it was previously the Maine Phillies and before that Maine Guides and were renamed the Scranton/Wilkes-Barre Red Barons. The name was chosen as a reference to the early minor league franchises in the area, the Scranton Red Sox and the Wilkes-Barre Barons, both members of the Eastern League. A group from Scranton, Pennsylvania, called Northeast Baseball, Inc. (NBI), purchased the team in 1985, with the hopes of moving it to a soon-to-be-built stadium in Lackawanna County. Maine ownership later sued NBI, claiming violation of the purchase contract. NBI also filed suit, and after a lengthy court battle, won control of the franchise. The Philadelphia Phillies took control of the team for its final season in 1988, renaming it from Maine Guides to Maine Phillies before its relocation to Lackawanna County.

Despite early on-field struggles, the team enjoyed great popularity in the community. The Red Barons drew over 500,000 fans for their first five seasons. Led by .310 hitter Rick Schu and Jay Baller's 22 saves, the club drew 598,067 fans and finished 84–58 in 1992, good for first place in the IL Eastern Division. The Barons would eventually fall to the Columbus Clippers in the championship series.[2] After six mediocre seasons, Marc Bombard took over as manager in 1997, and led the club to their second postseason appearance in 1999. The Barons reached the playoffs in four straight seasons from 1999 to 2002, losing in the finals in both 2000 and 2001. Bombard would manage the team for eight seasons, posting the best finish in Red Barons' history, a 91–53 record in 2002, led by Joe Roa's perfect 14–0 record.[3]

In the middle part of the 2000s, many talented players played for the Red Barons. Many of them, such as Chase Utley, Ryan Howard, Shane Victorino, and Cole Hamels, would help the Phillies win five consecutive division titles from 2007 to 2011, and a World Series in 2008. Despite this, attendance dropped during this time. Following the 2006 season, the Phillies ended their affiliation with the Red Barons and signed a player development contract with the Ottawa Lynx in anticipation of that team's move to Allentown's new Coca-Cola Park as the Lehigh Valley IronPigs for the 2008 season. 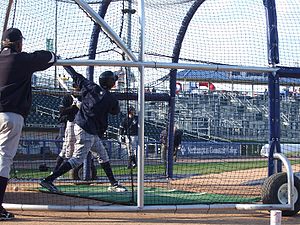 Members of the Scranton/Wilkes-Barre Yankees take batting practice before the Opening Day 2009 game versus the Lehigh Valley IronPigs at Coca-Cola Park in Allentown, Pennsylvania.

On September 21, 2006, the Red Barons announced an affiliation agreement with the New York Yankees, ending the Yankees' 28-year relationship with the Columbus Clippers.[4] The Red Barons sold 47,000 tickets on the day of the announcement. On December 12, 2006, the team was renamed Scranton/Wilkes-Barre Yankees, and unveiled new team logos and uniforms.[5]

The club enjoyed much success in their first four seasons as the Yankees. In 2007, the SWB Yankees finished with a record of 84–59 and captured the IL North Division title for the fourth time in team history before losing to Richmond in the semi finals. The 2008 season was the most successful in franchise history as the Yankees finished 88–56, won another division championship, and earned their first league title. After defeating the Pawtucket Red Sox 3–1 in the semi finals, the Yankees beat the Durham Bulls 3–1 in the final round to earn the Governors' Cup trophy. The team again finished in first place in 2009 and advance to the championship before being swept by Durham, 3–0.

The team made history in 2010 as they became the first club in the 126 years of International League play to win five consecutive division championships. Since 2006, S/W-B has compiled a record of 424–289 (.595 winning %) and has finished atop the Northern Division. In the 2010 postseason, the Yankees were beaten by the Columbus Clippers three games to one in the semi final round.

On November 9, 2010, the Lackawanna County Multipurpose Stadium Authority voted to sell the franchise to Mandalay Baseball Properties. The following day, SWB Yankees, LLC, announced plans to move ahead with a $40-million renovation to PNC Field.[6]

Leadership of the Scranton/Wilkes-Barre Yankees changed on July 9, 2012, when Rob Crain, the former assistant general manager of the Omaha Storm Chasers, was named the new president and general manager of the Scranton/Wilkes-Barre Yankees. Crain replaced former president Kristen Rose, who resigned from her position in April 2012.[8]

To facilitate major renovations to PNC Field during the 2012 season, the SWB Yankees chose to temporarily relocate their operations for 2012 to allow the renovations to be completed in one season rather than being spread over two to three years. The team based itself in Rochester, New York, and played over half its games at Frontier Field, home of the IL's Red Wings.[9][10] Other home games were spread over five other sites:[11]

For this season, while the team was still officially the Scranton/Wilkes-Barre Yankees, they used the name "Empire State Yankees" for promotional purposes.[9][12][13]

On May 6, 2012, a regular season record crowd of 13,584 fans were in attendance at Rochester's Frontier Field to witness Andy Pettitte make a start for the team against the Pawtucket Red Sox, wearing the "Empire State Yankees" logo. Pettitte had come out of retirement late in spring training of 2012, and made several minor-league appearances before joining the major league club. The game was originally supposed to be played at Dwyer Stadium in Batavia, New York but was moved due to a high demand of tickets.[14]

With the transition in ownership from a public authority to private hands, the new owners expressed an intent to change the name of the team for the 2013 season, including a possible change from "Scranton/Wilkes-Barre" to some other location identifier.[15] On November 14, 2012, it was announced that the team would be known as the Scranton/Wilkes-Barre RailRiders, with logos, colors, and uniforms announced with the new name. The team name was submitted by Chuck Parente of Duryea. Although "RailRiders" received the most first place votes by fans, "Porcupines" received the most overall fan votes on the ballots ranked one through three. As a result, a porcupine was incorporated in the RailRiders' logo.[16] The name of the team was a tribute to the Wyoming Valley's history as an economic powerhouse and railway center in the eastern parts of the state and Scranton's long contributions to the history of the US railroad and streetcar industries.

On July 25, 2013, the RailRiders played the longest game in Scranton/Wilkes-Barre franchise history, defeating the Toledo Mud Hens 2–1 in 20 innings at PNC Field.

On September 3, 2014, Mandalay Baseball Properties announced the sale of its 50% interest in the RailRiders to the SWB Investors LLC. The sale was estimated to be in the $13 million to $15 million range. The New York Yankees retained their 50% ownership of the team.[17] The ownership entity remains as SWB Yankees LLC. On January 6, 2016, Al Pedrique was announced as the RailRiders new manager taking over for Dave Miley.[18]

In 2016, the RailRiders captured the franchise's second Governors' Cup title, securing 3–1 series victories over arch rival Lehigh Valley and the Gwinnett Braves. The RailRiders then defeated the El Paso Chihuahuas of the Pacific Coast League by a score of 3–1 in the Triple-A Baseball National Championship Game.[19]

On January 31, 2018, Bobby Mitchell was named the RailRiders new manager.

The RailRiders home uniform is white with navy blue pinstripes, mirroring those of the New York Yankees. The primary home jersey features the SWB logo on the left chest.[23] The cranberry colors in the logo are a tip of the cap to the Red Barons.

The team's initial radio play-by-play announcer, Kent Westling, retired prior to the 2008 season and had been with the franchise since it moved to Pennsylvania in 1989. While he cut back his schedule in later years, Westling, a former local television sportscaster who once worked on telecasts of St. Louis Blues hockey team, had been behind the microphone for more than 2,000 games until announcing his resignation after the 2007 season.[24]

On November 6, 2017, Adam Marco was announced as the RailRiders new Director of Broadcasting and Media Relations. 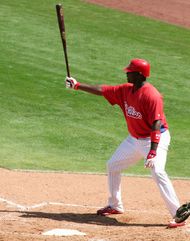 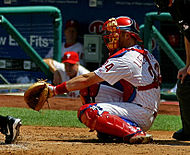 ^ Igawa was posted by the Hanshin Tigers in 2006 and the Yankees won the bidding for him. However, he spent most of his time with the team in Scranton as he struggled to remain on the Yankees' roster and has since returned to Japan.

†Made only appearance(s) for franchise during rehab assignment