From Infogalactic: the planetary knowledge core
Jump to: navigation, search
For the SeaWorld chain of parks, see SeaWorld.

SeaWorld Orlando is a theme park and marine zoological park, located on the outskirts of Orlando, Florida. It is owned and operated by SeaWorld Entertainment. When combined with its neighbor Discovery Cove and Aquatica, it forms SeaWorld Parks and Resorts Orlando, an entertainment complex consisting of the three parks and many neighboring hotels. In 2013, SeaWorld Orlando hosted an estimated 5.1 million guests, ranking it the tenth most visited amusement park in the United States and nineteenth worldwide.[2]

As of summer 2014, SeaWorld Orlando has been separated into different areas, called "seas".[3] Each with a unique themed element. Starting at the lower center and continuing clockwise they are:

Port of Entry: The main entrance of the park features a Florida-inspired theme with lush tropical landscaping and a large artificial freshwater marina with a Shamu-themed iconic lighthouse. It is the guests gateway to the many seas of SeaWorld.[3]

Sea of Shallows: This area showcases most of the shallow water sea animal exhibits at the park as well as the Dolphin Theater. In addition, the Manta rollercoaster travels through this section and Turtle Trek, a dome theater show also reside here. All of the Key West at SeaWorld area is inside of the Sea of Shallows. It is designed to mimic the appearance of the city of Key West, Florida with architecture and landscaping reminiscent of the area. Animal exhibits in this portion of the park include cownose rays, southern stingrays, green sea turtles, hawksbill sea turtle, loggerhead sea turtle, Atlantic bottlenose dolphins, greater flamingos, West Indian manatees, American alligators, bottlenose dolphins, and brown pelicans. The stingray and dolphin habitats offer opportunities for guests to feed the animals.[3]

Sea of Legends: The Sea of Legends is dedicated to the mysterious myths and other tales told about the sea. Journey to Atlantis, a boat ride with roller-coaster elements, bases its story from the legend of the lost city of Atlantis. Next to the gift shop there is an aquarium with animals in an environment made to look like Atlantis. Also found here is Kraken, a floorless roller-coaster where the rider plays the part of the Kraken racing through the ocean.[3]

Sea of Ice: Sea of Ice, originally named Antarctica, is themed around the Antarctic continent. Antarctica: Empire of the Penguin is the sole attraction in this area. It is a dark ride where the guests follow young penguin on a journey home after a harsh storm. The ride exits into the penguin exhibit area.[3]

Sea of Delight includes a sub-area named The Waterfront, which resembles a seaside Mediterranean village. The majority of the parks restaurants are here as well as many shops. The park's Sky Tower ride is also here, it was integrated into the theme of The Waterfront village when the area opened in 2003. The only land animal show at the park, Pets Ahoy, is located here inside of the Seaport Theater. Outside of the Waterfront is where the Sea Lion and Otter Stadium viewing area stands.[3]

Sea of Mystery: The Sea of Mystery is a less themed area compared to the others in SeaWorld. It houses the shark underwater viewing and the Shark's Underwater Grill. The Nautilus Theater, showing Cirque du Soleil style shows, and Sea Garden, up close animal area, also are located here. Mako, a Bolliger & Mabillard steel hypercoaster will join the area in 2016.[3]

Sea of Fun: Formerly Shamu's Happy Harbor, Sea of Fun, is a children's area hosted by Shamu, the park's orca mascot. The area is located adjacent to Shamu Stadium and features family activities including Shamu Express (a junior rollercoaster), a net climbing structure, and a water play area.[4] Signage here still refers to it as Shamu's Happy Harbor, although management and the map use the updated name.[3]

Sea of Power: Sea of Power is host area of the SeaWorld's iconic killer whale shows. The Shamu Stadium is located in the center with the Wild Arctic indoor pavilion nextdoor. Wild Arctic is a combined attraction which includes a motion simulator followed by an indoor animal exhibit hosting beluga whales, Pacific walrus, harbor seals, and formerly polar bears. During the Christmas holiday season, Wild Arctic is transformed into the Polar Express Experience based on the Warner Bros. film of the same name. Guests ride the Polar Express to the North Pole where Santa Claus waits to greet them. Shamu Stadium currently hosts "One Ocean" as its main show with "Shamu Celebration: Light up the Night" and "Shamu Christmas Miracles" showing seasonally.[3]

SeaWorld Orlando has many live shows and attractions including rides and animal exhibits. One of these attractions. Turtle Trek, actually combine the two, with both an animal exhibit followed by a 3-D movie. 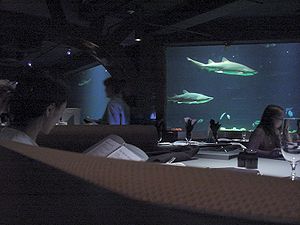 Dining with the sharks at the Sharks Underwater Grill

In February 2010, during a training session, one of the orca whales Tilikum pulled trainer Dawn Brancheau into the water and ultimately killed her.[10] An autopsy determined that Brancheau's death was attributed to blunt force trauma and drowning; injuries included her scalp being removed and her left arm being severed below the shoulder.[11] In August 2010, The U.S. Department of Labor's Occupational Safety and Health Administration cited SeaWorld of Florida LLC for three safety violations, following the death of an animal trainer in February. The total penalty was $75,000 and SeaWorld was required to keep a barrier between its trainers and the whales during shows.[12][13] This animal was one of the three killer whales responsible for an earlier 1991 trainer death at Sealand of the Pacific in Victoria, BC, Canada.[14][15]