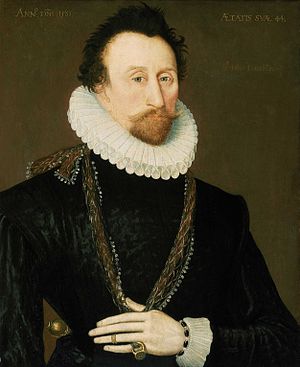 The Sea Dogs were English pirates at the time of Elizabeth I of England and were also known as Elizabethan Pirates.[1] They were active from 1560 to 1605 and had permission by Queen Elizabeth I to deal in acts of piracy and to attack the Spanish, as they commonly did, despite at times when they were not at war with them. They were able to do this because of the permission and because of the official document named Letters of Marque[2]

In the 1560s, John Hawkins was an important figure in the Sea Dogs and mainly engaged in attacks on Spanish shipping in the Caribbean.[3] The Sea Dogs would also engage in slave trade from Africa.[3] Sir John Hawkins was known as the pioneer of the British Slave trade because he was the first to complete the triangular trade, making a profit at each end. He was not the first to bring slaves back to England from Africa.

In 1588, Francis Drake, John Hawkins, Walter Raleigh and Martin Frobisher were all a part of the defeat of the Spanish Armada.

After 1604, when peace was made with Spain, many Sea Dogs continued their piratical activities by finding employment in the Barbary States, giving rise to Anglo-Turkish piracy, to the embarrassment of the English Crown.[5][6]