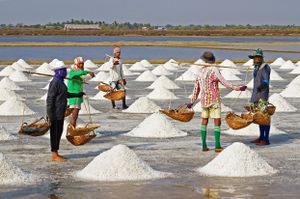 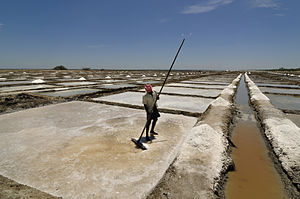 Sea salt is salt produced from the evaporation of seawater. It is used in cooking and cosmetics. It is also called bay salt[1] or solar salt.[2] Like mineral salt, production of sea salt has been dated to prehistoric times. Some cooks believe it tastes better than salt from mines. However, there is little or no health benefit to using sea salt over other forms of sodium chloride salts.

Almost all salts for consumption can be considered sea salts as they originated from a sea at some point in time. Commercially available sea salts on the market today vary widely in their chemical composition and none have the same composition and proportion of elements found in natural seawater.[citation needed] This is primarily due to the natural fractionation of salts that occurs during production. The typical composition of seawater by dry weight percent includes: 55.5% chloride; 30.8% sodium; 7.7% sulfate; 3.7% magnesium; 1.2% calcium; 1.1% potassium.[3]

Sea salt is mentioned in the Vinaya Pitaka, a Buddhist scripture compiled in the mid-5th century BC.[4] The principle of production is evaporation of the water from the sea brine. In warm and dry climates this may be accomplished entirely by using solar energy, but in other climates fuel sources have been used. Modern sea salt production is almost entirely found in Mediterranean and other warm, dry climates. 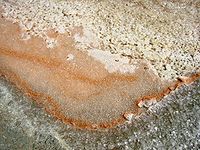 Such places are today called salt works, instead of the older English word saltern. An ancient or medieval saltern was established where there was:

In this way, salt marsh, pasture (salting), and salt works (saltern) enhanced each other economically. This was the pattern during the Roman and medieval periods around The Wash, in eastern England.[5] There, the tide brought the brine, the extensive saltings provided the pasture, the fens and moors provided the peat fuel, and the sun sometimes shone. 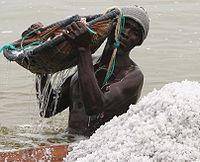 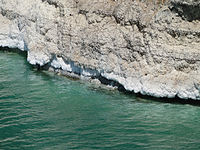 Salt deposits on the shores of Dead Sea, Jordan

The dilute brine of the sea was largely evaporated by the sun. In Roman areas, this was done using ceramic containers known as briquetage.[5] Workers scraped up the concentrated salt and mud slurry and washed it with clean sea water to settle impurities out of the now concentrated brine. They poured the brine into shallow pans (lightly baked from local marine clay) and set them on fist-sized clay pillars over a peat fire for final evaporation. Then they scraped out the dried salt and sold it. In rural areas of Sichuan, China, these traditional salt production methods lasted until industrialization in the 20th century.[6]

Today, salt labelled "sea salt" in the US might not have actually come from the sea, as long as it meets the FDA's purity requirements.[7]

Some gourmets believe sea salt tastes better and has a better texture than ordinary table salt.[8] In applications that retain sea salt's coarser texture, it can provide a different mouth feel, and may change flavor due to its different rate of dissolution. The mineral content also affects the taste. The colors and variety of flavors are due to local clays and algae found in the waters the salt is harvested from. For example, some boutique salts from Korea and France are pinkish gray, some from India are black. Black and red salts from Hawaii may even have powdered black lava and baked red clay added in.[9] Some sea salt contains sulfates. It may be difficult to distinguish sea salt from other salts, such as pink "Himalayan salt", Maras salt from the ancient Inca hot springs, or rock salt (halite).

According to The Mayo Clinic and Australian Professor Bruce Neal, the health consequences of ingesting sea salt or regular table salt are the same, as the content of sea salt is still mainly sodium chloride.[10][11] In comparison, table salt is more heavily processed to eliminate minerals and usually contains an additive to prevent clumping.[10]

Iodine, an element essential for human health,[12] is present only in small amounts in sea salt.[13] Iodised salt is table salt mixed with a minute amount of various salts of the element iodine.

In traditional Korean cuisine, jukyeom (죽염, 竹鹽), which means "bamboo salt", is prepared by roasting salt at temperatures between 800 and 2000 °C[14] in a bamboo container plugged with mud at both ends. This product absorbs minerals from the bamboo and the mud, and has been shown to increase the anticlastogenic and antimutagenic properties of the fermented soybean paste known in Korea as doenjang.[15] 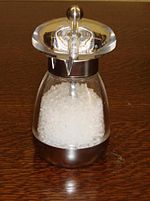 A salt mill for sea salt