The Seaboard Coast Line Railroad (reporting mark SCL) is a former Class I railroad company operating in the Southeastern United States beginning in 1967. Its passenger operations were taken over by Amtrak in 1971. Eventually the railroad was merged with its affiliate lines to create the Seaboard System in 1983.

At the end of 1970 SCL operated 9230 miles of railroad, not including A&WP-Clinchfield-CN&L-GM-Georgia-L&N-Carrollton; that year it reported 31293 million ton-miles of revenue freight and 512 million passenger-miles.

The main lines of the ACL and SAL, which became CSX's A and S lines

The Seaboard Coast Line emerged on July 1, 1967, following the merger of the Seaboard Air Line Railroad with the Atlantic Coast Line Railroad. The combined system totaled 9,809 miles (15,786 km), the eighth largest in the United States at the time.[1] The railroad had $1.2 billion in assets and revenue with a 54% market share of rail service in the Southeast, facing competition primarily from the Southern.[2]

The first expansion for the Seaboard Coast Line came in 1969 with the acquisition of the Piedmont and Northern Railway, which operated about 128 miles (206 km) in North and South Carolina.[5] SCL would buy out the remaining shares and gain control of the Louisville and Nashville Railroad in 1971, and the Durham and Southern Railway.

Effective January 1, 1983, the Seaboard Coast Line Railroad became Seaboard System Railroad after a merger with the Louisville and Nashville Railroad and Clinchfield Railroad. For some years prior to this, the SCL and L&N had been under the common ownership of a holding company, Seaboard Coast Line Industries (SCLI), the company's railroad subsidiaries being collectively known as the Family Lines System which consisted of the L&N, SCL, Clinchfield and West Point Routes. During this time, the railroads adopted the same paint schemes but continued to operate as separate railroads.

Juice Train is the popular name for famous unit trains of Tropicana fresh orange juice operated by railroads in the United States. On June 7, 1970, beginning on Seaboard Coast Line railroad, a mile-long Tropicana Juice Train train began carrying one million gallons of juice with one weekly round-trip from Bradenton, Florida to Kearny, New Jersey, in the New York City area. The trip spanned 1,250 miles (2,010 km) one way, and the 60 car train was the equivalent of 250 trucks.[7]

Today operated by SCL successor CSX Transportation, CSX Juice Trains have been the focus of efficiency studies and awards as examples of how modern rail transportation can compete successfully against trucking and other modes to carry perishable products.

SCL supplemented its local freight units with orders of GE U18B and EMD GP38 locomotives. Some U18B models contained a shorter, and therefore lighter, fuel tank which proved ideal for light density lines. Most units of this type were assigned to the Carolinas.[2] However, in 1978 the SCL decided not to purchase any more locomotives for local service on secondary mainlines and branchlines, instead aging GP7, GP9, and GP18 locomotives would be rebuilt into GP16 models at the Uceta shops. 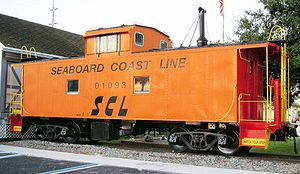