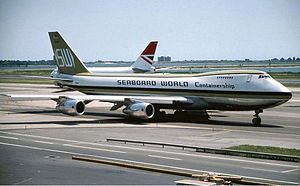 Seaboard World Airlines was an international all-cargo airline based in the United States. Its headquarters were on the grounds of John F. Kennedy International Airport in New York City.[1]

The airline played a prominent role in the Vietnam War during the late 1960s, using Douglas DC-8-63 jets to connect McChord Air Force Base, Washington with Cam Ranh Bay, Vietnam, fairly close to the front lines with North Vietnam. In 1968, one of these flights operating as Seaboard World Airlines Flight 253A was forced to land in the Soviet Union with 214 American troops on board. On 30 April 1969, a Seaboard World Airlines DC-8 with 219 passengers and 13 crewmembers landed by mistake at Marble Mountain Air Facility, when it had actually been cleared to land at the nearby Da Nang Air Base.[2][3] After fuel and passengers were offloaded, the plane was towed to the north overrun and departed five hours after the landing incident.

Seaboard was the first airline to fly a 747 Freighter service from the UK to the USA.

The airline merged with Flying Tiger Line on October 1, 1980, resulting in the loss of its corporate identity.[4]