This page is for the historical Scottish regiment. For the Canadian regiment of the same name see The Seaforth Highlanders of Canada.

The Seaforth Highlanders (Ross–shire Buffs, The Duke of Albany's) was an historic line infantry regiment of the British Army, mainly associated with large areas of the northern Highlands of Scotland. The Seaforth Highlanders have varied in size from two battalions to seventeen battalions during the Great War. After several mergers, with the Queen's Own Cameron Highlanders to form the Queen's Own Highlanders (Seaforth and Camerons), which later amalgamated with the Gordon Highlanders to form with the Highlanders (Seaforth, Camerons and Gordons) they have existed since 2006 as 4th (Highlanders) Battalion of the Royal Regiment of Scotland when all Scottish Infantry battalions: Royal Scots Borderers, the Royal Highland Fusiliers (Princess Margaret's Own Glasgow and Ayrshire Regiment), the Black Watch (Royal Highland Regiment) and the Argyll and Sutherland Highlanders were amalgamated to form The Royal Regiment of Scotland.

The regiment was created through the amalgamation of the 72nd Highlanders (Duke of Albany's Own) and the 78th Highlanders (Ross-shire Buffs), as part of the Childers Reforms of the British Army in 1881. The regimental museum is located at Fort George near Inverness. Fort George served as Depot for The Seaforth Highlanders for most of the regiment's life. The regiment served in Britain's later colonial wars, in Egypt (1882), the Sudan (1885), India (1895) and the Boer War (1899-1902). 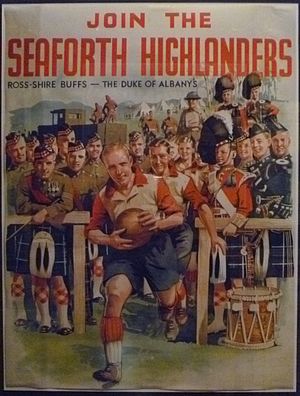 At the outbreak of the Great War, the 1st Battalion was serving in India. The 2nd Battalion was stationed at Shorncliffe Camp near Cheriton, Kent in southern England. The 2nd Battalion was sent to France as part of the British Expeditionary Force (BEF). As part of the 10th Brigade, 4th Division, it took part in the retreat from Le Cateau, the Battle of the Marne and the subsequent chase of the German forces to the River Aisne. In mid-September 1914, the battalion was heavily involved in the Battle of the Aisne, suffering heavy casualties including the CO).

The 1st Battalion was returned from India, arriving in France in late 1914, and later took part in the Battle of Givenchy.

During the war the three front line Territorial battalions of the regiment, 1/4th, 1/5th and 1/6th Battalions all served in the 51st (Highland) Division.

In 1921, the 1st Battalion was deployed to the Scottish coalfields to maintain order during strike action by the miners. Later, the battalion served in Ireland during and after the partition. The 1st Battalion returned to India in the late 1920s.

Both battalions served in Palestine in the 1930s. 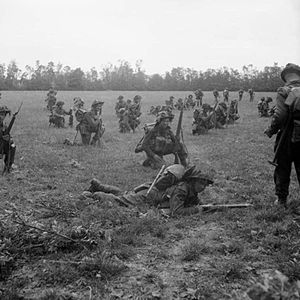 Infantry of the 7th Seaforth Highlanders, 15th (Scottish) Infantry Division, waiting at their start line on 26 June 1944 for the signal to advance. 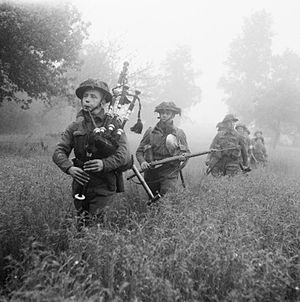 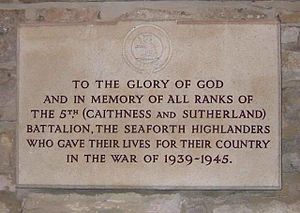 In 1940, the 6th Battalion was sent to France as part of the BEF. The Battalion was involved in the Blitzkrieg of May 1940, escaping through Dunkirk on 1 June after suffering significant losses. 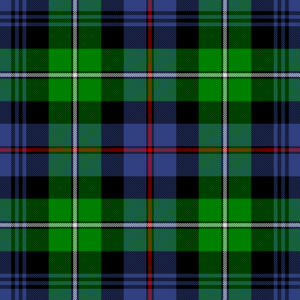 The Mackenzie tartan, otherwise known as the regimental tartan of the Seaforth Highlanders.

The 2nd and 4th Battalions were also part of the BEF in 1940 serving in the 51st (Highland) Division .

The 5th Bn. of the Regiment was a territorial unit in both World Wars and recruited in the counties of Sutherland and Caithness. Instead of the Mackenzie tartan kilt and stag's head badge the battalion wore the Sutherland Kilt and the wildcat badge of the Clan Sutherland. The 2nd and 5th battalions formed part of 152 Brigade of the reconstituted 51st Highland Division, and served with distinction from El Alamein onwards through to the German surrender in Sicily. Subsequently 152 Brigade joined the D-day campaign from 7 June 1944 and served continuously until the capture of Bremen and VE-Day. Uniquely for a territorial battalion in World War II, the 5th Battalion Seaforth Highlanders was the subject of a battalion history, Battalion by Alistair Borthwick, which is a powerful testimony to the quality and sustained contribution of this distinguished unit.

Whilst soldiers and officers now wear Government No.2 Tartan, the Battalion's Pipes and Drums have retained the Cameron of Erracht Tartan from prior to amalgamation for their kilts, plaids and stable belts.

(Those borne on the Colours are in bold type) 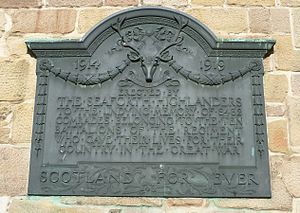 Seaforth Highlanders Great War Memorial plaque in Tain. There is an identical plaque above the entrance to the Courthouse in Dornoch

The Seaforth cap badges consist of the Stags' head, motto, "L" and Coronet (not a crown). Officers wore the full four piece set (sometimes the L and coronet were joined together) in 3-D Sterling silver. Senior NCOs wore the lower two in full 3-D Sterling silver. Junior ranks wore a white metal one-piece badge depicting the scroll and stag's head. The MacKenzie tartan worn by the Seaforths is much darker that the example shown here.