The seal features a shoreline on which a Seminole woman is spreading hibiscus flowers. Two Sabal palms (Florida's state tree) are growing. In the background a steamboat sails before a sun breaking the horizon, with rays of sunlight extending into the sky. The seal is encircled with the words "Great Seal of the State of Florida", and "In God We Trust" (the state motto).

Use of the seal

The Florida Secretary of State is the official custodian of the seal.[1] Use or display of the seal must be for an official purpose and approved by the Florida Department of State.[1] One exception is that other Florida state or local agencies can use or display the seal for official business if approved by head of their agency.[2] Illegal use of the seal in Florida is a second-degree felony.[1] 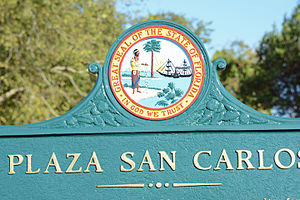 The seal on a historical marker (Fernandina)