Seann William Scott (born October 3, 1976) is an American actor, comedian, and producer. He is best known for his role as Steve Stifler in the American Pie series of teen sex comedies. He has appeared in a range of genres, including the horror film Final Destination (2000), the road-comedy film Road Trip (2000), the stoner comedy film Dude, Where's My Car? (2000), the science fiction comedy Evolution (2001), the action films Bulletproof Monk and The Rundown (both 2003), the action comedy film The Dukes of Hazzard (2005), the comedy Role Models (2008), the buddy cop film Cop Out (2010), the hockey comedy film Goon (2011) and Crash in the Ice Age franchise.

Scott, was born in Cottage Grove, Minnesota. He is the son of Patricia Anne (née Simons), a homemaker, and William Frank Scott, a factory worker. Scott is the youngest of seven children. Scott was inspired to become an actor while working at the local movie theater and seeing all the movies he could watch for free. Scott is of Scottish and German ancestry.[citation needed] 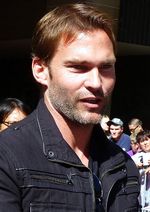 Scott's first commercial success came with the 1999 film American Pie, as Steve Stifler, a role he reprised in three sequels, American Pie 2 (2001), American Wedding (2003), and American Reunion (2012).[1] For his supporting role in the first film, Scott was paid only $8,000.[2] Scott was granted the lead role in American Wedding, though he only received second billing, and the character propelled him into the public consciousness. Scott's fear of typecasting led him to play different types of characters post-American Pie, such as a hapless nerd in the horror film Final Destination and a friendly stoner in Dude, Where's My Car?.

Scott made an appearance in Kevin Smith's Jay and Silent Bob Strike Back as a guitar-playing animal rights activist and had a starring part as a police officer in Southland Tales, where he reunited with Dwayne "The Rock" Johnson, with whom he had previously worked in The Rundown. Scott hosted the MTV Movie Awards 2003 with Justin Timberlake. The two performed several skits, including scenes from The Matrix Reloaded, which are on The Matrix Reloaded DVD. He has also hosted Saturday Night Live and appeared as a guest co-host on Live with Regis and Kelly.He voiced the character Crash in Ice Age: The Meltdown and reprised his role in its sequel Ice Age: Dawn of the Dinosaurs (2009) and Ice Age: Continental Drift (2012). He co-starred in the action comedy Cop Out.[3] In 2011 he starred in the sports comedy film Goon as Doug 'The Thug' Glatt.[citation needed] In 2012, he starred in Movie 43 in the segment 'Happy Birthday.[citation needed] He reprised his role as 'Steve Stifler in 2012 American Reunion. On October 2, 2013, Scott guest-starred in Episode 5, Season 9 (entitled "Mac Day") of the FX television series It's Always Sunny in Philadelphia, playing Mac's cousin, "Country Mac." In 2014 he starred in the comedy-drama film, Just Before I Go as Ted Morgan.[citation needed] He is set to reprise his role as Doug 'The Thug' Glatt in the upcoming sequel Goon: Last of the Enforcers and also he will also reprise his character 'Crash' in the upcoming Ice Age 5 both set for a 2016 release date.

The cast of American Reunion in Sydney, 2012

On March 16, 2011, Scott was admitted to a treatment facility for "health and personal issues". His representatives declined to confirm any details about the decision, including specifying the facility.[4] On April 13, it was reported that Scott had successfully completed the treatment program.[5]

In March 2012, Scott confirmed that he was engaged to model Lindsay Frimodt.[6] In January 2013, US Weekly reported that this engagement had ended and that the two had split, but would remain friends.[7]