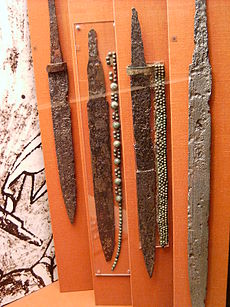 Seax (Old English pronunciation: [ˈsæɑks]) (also sax, sæx, sex, latinized sachsum) is an Old English word for "knife".[1] In modern archaeology, the term seax is used specifically for a type of sword or dagger typical of the Germanic peoples of the Migration period and the Early Middle Ages, especially the Saxons, whose name derives from the weapon.[2]

In heraldry, the seax is a charge consisting of a curved sword with a notched blade, appearing, for example, in the coats of arms of Essex and the former Middlesex.[3]

Old English seax, sax and Old Frisian sax are identical with Old Saxon and Old High German saks, all from a Common Germanic *sahsą from a root *sah, *sag- "to cut" (also in saw, from a PIE root *sek-). In Scandinavia, the words Sax, Saks or Sakset all refer to scissors, which of course are used for cutting various materials. The term scramaseax or scramsax (lit. "wounding-knife") is sometimes used for disambiguation, even though it is not attested in Old English, but taken from an occurrence of scramasaxi in Gregory of Tours' History of the Franks.[4]

The name of the roofer's tool, the zax, is a development from this word.

The remains of a seax together with a reconstructed replica

Amongst the shape and construction of seaxes there is a great deal of variation. The most frequent characteristics are:

In the continental Germanic area, the following types are defined for seaxes between roughly 450 and 800 AD, in chronological order:[5]

The general trend, as one moves from the short to the broad seax, is that the blade becomes heavier, longer, broader and thicker. Long seaxes, which arrived at the end of the 7th century, were the longest of the seax. These were narrower and lighter than their predecessors. Initially, these weapons were found in combination with double-edged swords and were probably intended as side arm. From the 7th century onwards, seaxes became the main edged weapon (next to a francisca), sometimes in combination with small side-knives.[5]

The rest of Europe (except for parts of Scandinavia) followed a similar development, although some types may not be very common depending on location. In England long seaxes appear later than on the continent and finds of long seaxes (as opposed to knives) remain very rare in comparison to finds of swords throughout the period.[6][7]

Broken-back seax from Sittingbourne in Kent

Another typical form of the seax is the so-called broken-back style seax. These seaxes have a sharp angled transition between the back section of the blade and the point, the latter generally forming 1/3 to 3/5 of the blade length. These seaxes exist both in long seax variety (edge and back parallel) and in smaller blades of various lengths (blade expanding first, then narrowing towards the tip after the kink). They occurred mostly in the UK and Ireland, with some examples in Germany around 8th-11th century. Some examples have patternwelded blades, while others have inlays of silver, copper, brass, etc.