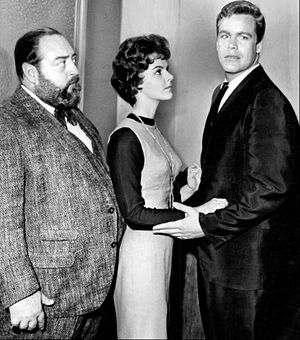 Cabot was born in London, England. At the age of 14, he left school to work in an automotive garage, where he served as chauffeur and valet for British actor Frank Pettingell.[1] Cabot became interested in theatre, and after becoming acquainted with other actors and having worked for Pettingell, he joined a repertory company. Cabot admitted that in gaining employment as an actor he lied about previous acting credits. Cabot stated later in a 1968 interview that he believed acting was a type of lying and had gained a smoothness in his speech while serving as Pettingell's dressing room butler.[1][2] At this time, Cabot developed a love of cooking and, at the urging of his father, became a chef.[1] After wrecking a car, Cabot left the garage and had to look for acting work on his own. He initially used an agency to find acting employment. Without attending any drama school, Cabot learned the hard way, having been fired on his first day in a show called On The Spot. However, finding more work, Cabot's confidence in his acting skills increased, and soon he was personally getting called on the phone for employment.[2] He and his wife Kathleen had three children, two daughters and a son: Annette, Yvonne, and Christopher. 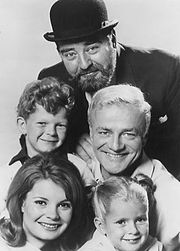 Cabot (at top) as Mr. French on Family Affair.

His formal acting career began with a bit part in Foreign Affaires (1935); his first screen credit was in Alfred Hitchcock's Secret Agent (1936). Other British films followed such as Love on the Dole (1941), Pimpernel Smith (also 1941), Old Mother Riley Overseas and Old Mother Riley Detective (both 1943) and They Made Me a Fugitive (1947). In 1946, he portrayed Iago in a condensed short film version of Othello. Post-war, Cabot landed roles in such British films as Third Time Lucky (1949), The Spider and the Fly (1949), as the villainous Fouracada in Dick Barton Strikes Back (1949); he was also in Ivanhoe (1952) and The Love Lottery (1954). He appeared in a couple of international productions, the Spanish-UK-USA Sinbad comedy Babes in Bagdad (1952) and the Italian version of Romeo and Juliet (1954) as Lord Capulet, before working for Disney in Hollywood on Westward Ho, the Wagons! (1956) and as the scheming landlord Jonathan Lyte in Johnny Tremain (1957). In George Pal's production of H.G. Wells' The Time Machine (1960) he was Dr. Hillyer who doubts the time traveller's story. Meanwhile, Cabot had begun to work as a voice actor. In the 1950s he was featured in a radio show called Horizons West,[3] a 13-part radio drama which followed the story of the Lewis and Clark Expedition, and was the voice of Noah in the first recording of Igor Stravinsky's biblical 'musical play' The Flood (1962). He also did voice parts for animated films such as Disney's The Sword In The Stone (1963) as Sir Ector, Jungle Book (1967) as Bagheera.

About this time Cabot began taking on television work, appearing in such series as The Adventures of Hiram Holliday (1956–57), on Frank Lovejoy's detective series Meet McGraw (1958), with James Best in the western series Bonanza (1960) and Pony Express ("The Story of Julesburg", 1960), The Beachcomber (series regular in 1962), and The Twilight Zone ("A Nice Place to Visit", 1960). Cabot had a two-year period as one of the three leads as college professor Dr. Carl Hyatt on Eric Ambler's detective show Checkmate (1960–1962), which co-starred Anthony George and Doug McClure. As Checkmate fit into the CBS Saturday schedule, Cabot appeared as Eric Whitaker in the 1960 episode "Five O'Clock Friday" on the ABC adventure series, The Islanders. Cabot was a regular panellist on the television game show, Stump the Stars. He appeared on the NBC interview programme Here's Hollywood. In 1964, he hosted the short-lived television series, Suspense, and voiced or narrated a few other film and television projects, before he was cast from 1966 to 1971 as Giles French in the CBS series Family Affair, with Brian Keith and Kathy Garver. Cabot did not halt his other film and television work during the run of Family Affair; he took a leave of absence from the series at one point; his replacement was veteran British character actor John Williams, who played French's brother Nigel. Cabot was also the host of Journey to Midnight as well as other work from the period. He was so vividly etched as French in viewers' minds that he never shook the image even after Family Affair ended production in 1971. He received another role as the host (Winston Essex) of Ghost Story (1972), a supernatural anthology (it was retitled Circle of Fear after he left the show). Following the series' demise, Cabot played Kris Kringle in the television remake of Miracle on 34th Street (1973). Cabot appeared in another Christmas project, the television film The City That Forgot About Christmas (1974), and narrated two more Pooh projects, Winnie the Pooh and Tigger, Too! and The Many Adventures of Winnie the Pooh. He also released an album of spoken recitations of songs by Bob Dylan, as Sebastian Cabot, actor/Bob Dylan, poet, in 1967. Two tracks from this album appear on the Rhino Records compilation Golden Throats: The Great Celebrity Sing Off.

He lived in his final years in Deep Cove, in the Victoria suburb of North Saanich, British Columbia, Canada. Cabot died on 22 August 1977 in a Victoria hospital, after suffering his second stroke in three years. He was cremated and his ashes were buried in Westwood Village Memorial Park Cemetery.

On CBS's 12 December 2012 Late Show with David Letterman, comedian Billy Crystal mentioned Cabot in humorous dialogue with host David Letterman.[4] Letterman commented that Cabot's name had not been heard in 30 years. Directly before the commercial break Sebastian Cabot's photo was shown on national television as a tribute.[4]