The Second Battle of Chuenpee[nb 1] was fought between British and Chinese forces at the Bocca Tigris, China, on 7 January 1841 during the First Opium War, and led to the British capturing forts on the islands of Chuenpee and Tycocktow. Subsequent negotiations between British Plenipotentiary Charles Elliot and Chinese Imperial Commissioner Qishan resulted in the Convention of Chuenpee. As one of the terms of the agreement, Elliot demanded the cession of Hong Kong Island to the British Empire.

In October 1840, the Daoguang Emperor of the Qing dynasty fired Imperial Commissioner Lin Zexu and replaced him with Qishan.[1] British Foreign Secretary Lord Palmerston instructed Plenipotentiary Charles Elliot to have the ports of Canton, Amoy, Fuzhou, Ningpo, and Shanghai opened for trade; to acquire the cession of at least one island (or if the Chinese refused, the establishment of a secure English enclave on the mainland), and to secure compensation for confiscated opium as well as military costs incurred in China.[2][3] On 1 December 1840, Elliot wrote to Palmerston that these demands would be secured within ten days. Three days after the deadline, Elliot wrote to Governor-General of India Lord Auckland that he had failed to get the concessions, but still predicted success. He conceded to Auckland that any success would be "far short of the demands of the government."[2]

In negotiations with Qishan, Elliot wanted $7 million over a period of six years and the surrender of Amoy and Chusan as permanent British possessions. Qishan offered $5 million over twelve years, so they agreed to $6 million.[2] However, Qishan refused Elliot's territorial demands. Elliot countered with an offer to abandon Chusan (which the British captured in July 1840) and for another port to be chosen later in its place. After Qishan's rejection of this offer, Elliot told him, "There are very large forces collected here, and delays must breed amongst them a very great impatience."[4] The year passed with no final settlements. An opium clipper that subsequently sailed into Canton brought with it a rumour that the emperor had decided to wage war. On 5 January 1841, Elliot prepared for an attack on Canton, informing Qishan that an attack would commence in two days if agreement could not be reached.[4] He allowed Commodore James Bremer, commander-in-chief of the British forces, to make offensive operations.[5]

British operations began at 8:00 am on 7 January from Sampanchow Island, 3 miles (4.8 km) below the first Bocca Tigris forts.[6] By 9:00 am, 504 Royal Marines, 33 Royal Artillery, 104 troops of the 26th and 49th regiments, 607 troops of the 37th Madras Native Infantry, 76 Bengal Volunteers, and 137 seamen from the Wellesley, Blenheim, and Melville landed unopposed 2 miles (3.2 km) below the Chuenpee Island artillery batteries. An additional 30 seamen operated a 24 pound howitzer and two 6 pounder field guns. Major Thomas Simson Pratt of the 26th regiment commanded the land force of about 1,500 men.[7][8] About 2,000 Chinese troops defended Chuenpee.[9]

After advancing 1.5 miles (2.4 km), the British spotted the upper fort and an entrenchment comprising a deep ditch with surrounding breastwork. The Chinese cheered when they saw the British, waved their flags in defiance, and opened fire from the batteries. In response the British cannons on the crest of the hill commenced firing. The Chinese then returned fire for about 20 minutes.[7] The Queen and Nemesis steamers (under Captain Edward Belcher) fired shells into the upper fort while the Calliope, Hyacinth, and Larne ships (under Captain Thomas Herbert) attacked the lower fort. In less than an hour, the combined bombardment silenced the Chinese batteries. By 10:00 am, the upper fort had been captured, and the lower fort surrounded and stormed by Royal Marines.[10] After the capture, Nemesis attacked a fleet of about 15 junks under Admiral Kuan T'ien-p'ei in Anson's Bay.[nb 2] The ship fired a Congreve rocket that struck a junk near the admiral. A British officer gave his account of the incident: 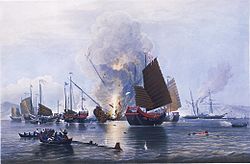 The very first rocket fired from the Nemesis was seen to enter the large junk ... and almost the instant afterwards it blew up with a terrific explosion, launching into eternity every soul on board, and pouring forth its blaze like the mighty rush of fire from a volcano. The instantaneous destruction of the huge body seemed appalling to both sides engaged. The smoke, and flame, and thunder of the explosion, with the broken fragments falling round, and even portions of dissevered bodies scattering as they fell, were enough to strike with awe, if not fear, the stoutest heart that looked upon it.[11]

At about 11:30 am, the Chinese on board the junks hauled down their flags.[12] Captain James Scott of the Samarang commanded the attack on Tycocktow Island (west of Chuenpee).[10] When the forts began firing on the British vessels at 10:20 am, the Samarang returned fire ten minutes later after anchoring 200 yards (180 m) away. The Modeste, Druid, and Columbine later anchored in succession. Scott reported that "in a few minutes, so destructive and well directed was the fire of our ships, that that of the enemy was silenced, with the exception of an occasional gun or two."[13] At 11:20 am, the ships embarked their crewmen to storm the forts[13] where the Chinese remained inside until driven out.[10] The Chinese could not withstand the onslaught of British muskets during hand-to-hand combat. After capturing the forts, the Chinese guns were spiked and thrown into the river.[14]

In total, 38 British were wounded[15] while British sources put Chinese casualties and losses at between 500 and 600 killed,[16] 200 to 300 wounded,[17] 11 junks destroyed,[12][18] and 191 artillery pieces captured.[19] One hundred prisoners who laid down their arms were released the next day.[16] According to Qing scholar Wei Yuan, Kuan sent Rear-Admiral Li T'ing-Yü to Canton to request more troops, which the "whole official body" supported except Qishan, who spent the night writing peace proposals.[20]

Elliot sent a Chinese prisoner to Kuan, with a letter explaining "the usages of civilized warfare" and that if the forts did not hoist their colours the following day, they would not be attacked.[21] At 11:30 am on 8 January, British ships led by the Blenheim sailed up the Bocca Tigris. As they approached Anunghoy Island (north of Chuenpee), a boat rowed by an old woman displayed a white flag.[22][23] A man from the ship was taken on board a British vessel to deliver a request from Kuan that hostilities be suspended for three days in order to contact Qishan.[24][25] Cancellation of the attack order prompted Lieutenant John Ouchterlony to note that it "certainly created a feeling of great disappointment throughout the fleet."[23] Elliot addressed the cancellation in a circular aboard the Wellesley: "A communication has been received from the Chinese commander-in-chief, which has led to an armistice, with the purpose to afford the high commissioner time to consider certain conditions now offered for his acceptance."[26]

On 20 January, after the Convention of Chuenpee, Elliot announced "the conclusion of preliminary arrangements" between Qishan and himself. They involved the cession of Hong Kong Island to the United Kingdom, a $6 million indemnity payable to the British government, direct and equal ties between the countries, and trade in Canton to be opened within ten days following the Chinese new year.[27] They also agreed to the restoration of Chuenpee and Tycocktow to the Chinese, and the evacuation of Chusan.[28] On 26 January, the Union Flag was raised on Hong Kong, and Commodore Bremer took formal possession of the island, under a feu de joie from the marines and a royal salute from the anchored men-of-war.[29] On 29 January, Elliot proclaimed that Chinese natives "shall be governed according to the laws and customs of China, every description of torture excepted" and that "all British subjects and foreigners residing, or resorting to the island of Hongkong, shall enjoy full security and protection, according to the principles and practice of British law".[30]

When the news reached the emperor, he ordered Qishan to be "degraded from his office" and to stand trial at the Board of Punishments.[31] Qishan faced several charges including giving "the barbarians Hongkong as a dwelling place".[32] In his response, he claimed, "I pretended to do so from the mere force of circumstances, and to put them off for a time, but had no such serious intention."[32] The court denounced him as a traitor and sentenced him to death. He was imprisoned for several months, but at the end of 1841 he was allowed, without authority or rank, to deal with the British.[33] On 21 April 1841, Lord Palmerston wrote a letter of reprimand to Elliot and recalled him for not securing the earlier demands as ordered.[3] Palmerston dismissed Hong Kong as "a barren island with hardly a house upon it."[34] In May 1841 Henry Pottinger replaced Elliot as plenipotentiary .[34]

Queen Victoria addressed the battle and Elliot's negotiations in a letter to her uncle, King Leopold I of Belgium, on 13 April 1841:

The Chinese business vexes us much, and Palmerston is deeply mortified at it. All we wanted might have been got, if it had not been for the unaccountably strange conduct of Charles Elliot ... who completely disobeyed his instructions and tried to get the lowest terms he could. [...] The attack and storming of the [Chuenpee] Forts on the 7th of January was very gallantly done by the Marines, and immense destruction of the Chinese took place. The accounts of the cruelty of the Chinese to one another are horrible. Albert is so much amused at my having got the Island of Hong Kong, and we think Victoria ought to be called Princess of Hong Kong in addition to Princess Royal.[35]