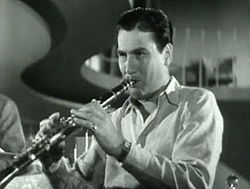 In a 1968 interview, Astaire described this effort as "The worst film I ever made". Astaire admitted that he was attracted to the film by the opportunity to "dance-conduct this real swingin' outfit". In an interview shortly before his death, Shaw admitted this film put him off acting. Astaire and Shaw shared a striking series of personality traits in common: an obsessive perfectionism and seemingly endless appetite for retakes, profound musicality and love of jazz, personal modesty and charm, and in a late interview Shaw expressed his opinion of Astaire: "Astaire really sweat - he toiled. He was a humorless Teutonic man, the opposite of his debonair image in top hat and tails. I liked him because he was an entertainer and an artist. There's a distinction between them. An artist is concerned only with what is acceptable to himself, where an entertainer strives to please the public. Astaire did both. Louis Armstrong was another one."[2]

The film's copyright lapsed in 1967 and it is now in the public domain, with the result that prior to its recent restoration, it has tended to circulate in seriously degraded prints.

Danny O'Neill (Fred Astaire), and Hank Taylor (Burgess Meredith) are friends and rival trumpeters, with "O'Neill's Perennials", a college band. Both of them have managed to prolong their college career by failing seven years in a row. At a performance, Ellen Miller (Paulette Goddard) catches Danny and Hank's eye. She serves them a collection notice for her boss, a debt collector, but the fast talking O'Neill and Taylor soon have her working for them as their manager.

Tired of losing gigs to the Perennials, Artie Shaw, playing himself, comes to woo Ellen away to be his booking manager. She tries to get Danny and Hank an audition for Shaw's band, but their jealous hi-jinks get them both fired.

Ellen talks Shaw into letting rich wannabee musician J. Lester Chisholm (Charles Butterworth) back a concert. It looks like the jig is up when Hank pretends to be Ellen's jealous husband, and then her brother. But, talking fast, Danny and Hank get Chisholm back on board, and are able to get Shaw to agree to put Danny's song into the show. All they have to do is keep Chisholm and his mandolin, which he wants to play in the concert, away from Shaw until after the show; the solution is sleeping pills to knock Chisolm, and incidentally Hank, out.

To Ellen's relief, Danny finally acts professionally, arranging his number for the show, which Shaw says "has really grown up into something special". He hands the baton to Danny, and he successfully dance-conducts his own composition.

Hermes Pan collaborated with Astaire on the choreography.

The only number involving Astaire and Pan, possibly the most important choreographic collaboration in the history of filmed dance - was "Me And The Ghost Upstairs", which was cut from the final film, but is currently included in some regional DVD versions of the film. In it, Pan, shrouded in a sheet, creeps up on Astaire and begins to mimic him. The two then dance a riotous number involving Lindy lifts and jitterbugging. It is not really finished to Astaire's usual standards, and this, combined with the fact that the figure under the shroud is obviously male, wearing women's high heels, may have led to its deletion.