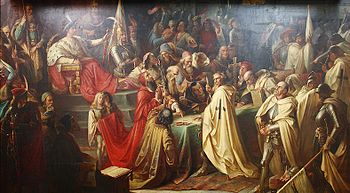 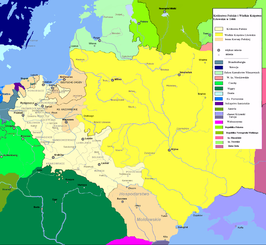 Poland and Lithuania in 1466

The Second Peace of Thorn of 1466 (German: Zweiter Friede von Thorn; Polish: Drugi Pokój Toruński) was a peace treaty signed in the Hanseatic city of Thorn (Toruń) on 19 October 1466 between the Polish king Casimir IV Jagiellon on one side, and the Teutonic Knights on the other.

The treaty concluded the Thirteen Years' War (1454–1466) which had begun in February 1454 with the revolt of the Prussian Confederation, led by the cities of Danzig (Gdańsk), Elbing (Elbląg), Kulm (Chełmno) and Thorn, and the Prussian gentry against the rule of the Teutonic Knights in the Monastic State.

Both sides agreed to seek confirmation from Pope Paul II and Holy Roman Emperor Frederick III, but the Polish side stressed (and the Teutonic side agreed) that this confirmation would not be needed for validation of the treaty. In the treaty, the Teutonic Order ceded the territories of Pomerelia (Eastern Pomerania) with Danzig, Kulmerland with Kulm and Thorn, the mouth of the Vistula with Elbing and Marienburg (Malbork), and the Bishopric of Warmia (Ermland) with Allenstein (Olsztyn). The Order also acknowledged the rights of the Polish Crown for Prussia's western half, subsequently known as Polish or Royal Prussia.[1] Eastern Prussia, later called Duchy of Prussia remained with the Teutonic Order until 1525, as a Polish fief.

The treaty stated that Royal Prussia became the exclusive property of the Polish king and Polish kingdom. Later some disagreements arose concerning certain prerogatives that Royal Prussia and the cities held, like Danzig's privileges. The region possessed certain privileges such as the minting of its own coins, its own Diet meetings (see the Prussian estates), its own military, and its own administrative usage of the German language. A conflict over the right to name and approve Bishops in Warmia, resulted in the War of the Priests (1467–79). Eventually, Royal Prussia became integrated into the Polish–Lithuanian Commonwealth, but retained some distinctive features until the partitions of Poland in the late 18th century.

In 1525, the Order was ousted from East Prussian territory by its own Grand Master when Albert, Duke of Prussia adopted Lutheranism and assumed the title of duke as hereditary ruler under the overlordship of Poland in the Prussian Homage. The area became known as the Duchy of Prussia.