President Manuel L. Quezon declared Manila, the capital city, an "open city" and left it under the rule of Jorge B. Vargas, as mayor. The Japanese entered the city on January 2, 1942, and established it as the capital. Japan fully captured the Philippines on May 6, 1942, after the Battle of Corregidor.

General Masaharu Homma decreed the dissolution the Commonwealth of the Philippines and established the Philippine Executive Commission, a caretaker government, with Vargas as its first chairman in January 1942. KALIBAPI– Kapisanan sa Paglilingkod sa Bagong Pilipinas (Tagalog for the "Organization in the Service of the New Philippines") was formed by Proclamation No. 109 of the Philippine Executive Commission (Komisyong Tagapagpaganap ng Pilipinas), a piece of legislation passed on December 8, 1942, banning all existing political parties and creating the new governing alliance. Its first director-general was Benigno Aquino, Sr..[1] The pro-Japanese Ganap Party, which saw the Japanese as the savior of the archipelago, was absorbed into the KALIBAPI.[2] 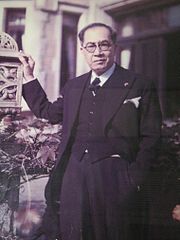 José Paciano Laurel was the only president of the Second Philippine Republic.

By September 20, 1943, the KALIBAPI's representative groups in the country's provinces and cities elected from among themselves fifty-four members of the Philippine National Assembly, the legislature of the country, with fifty-four governors and city mayors as ex-officio members.

Three days after establishing the National Assembly, its inaugural session was held at the pre-war Legislative Building and it elected by majority Benigno S. Aquino as its first Speaker and José P. Laurel as President of the Republic of the Philippines, who was inaugurated on October 14, 1943, at the foundation of the Republic, the Legislative Building.[4] Former President Emilio Aguinaldo and General Artemio Ricarte raised the Philippine flag, the same one used during the Philippine–American War, during the inauguration.[3]

On the same day, a "Pact of Alliance" was signed between the new Republic and the Japanese government that was ratified two days later by the National Assembly. 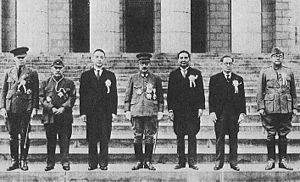 The Greater East Asia Conference (大東亜会議, Dai Tōa Kaigi?) was an international summit held in Tokyo from 5 to 6 November 1943, in which Japan hosted the heads of state of various component members of the Greater East Asia Co-Prosperity Sphere. The event was also referred to as the Tokyo Conference. The Conference addressed few issues of any substance, but was intended from the start as a propaganda show piece, to illustrate the Empire of Japan's commitments to the Pan-Asianism ideal and to emphasize its role as the "liberator" of Asia from Western colonialism.[6]

The conference and the formal declaration adhered to on November 6 was little more than a propaganda gesture designed to rally regional support for the next stage of the war, outlining the ideals of which it was fought.[7] However, the Conference marked a turning point in Japanese foreign policy and relations with other Asian nations. The defeat of Japanese forces on Guadalcanal and an increasing awareness of the limitations to Japanese military strength led the Japanese civilian leadership to realize that a framework based on cooperation, rather than colonial domination would enable a greater mobilization of manpower and resources against the resurgent Allied forces. It was also the start of efforts to create a framework that would allow for some form of diplomatic compromise should the military solution fail altogether.[7] However these moves came too late to save the Empire, which surrendered to the Allies less than two years after the conference.

Problems of the Republic

During his term in office, Laurel was faced with various problems that the country was experiencing, such as the following:

Laurel attempted to show that the independence of the republic was genuine by rectifying these problems.

Prioritizing the shortages of food, he organized an agency to distribute rice, even though most of the rice was confiscated by Japanese soldiers. Manila was one of the many places in the country that suffered from severe shortages, due mainly to a typhoon that struck the country in November 1943. The people were forced to cultivate private plots which produced root crops like kangkong.[9] The Japanese, in order to raise rice production in the country, brought a quick-maturing horai rice, which was first used in Taiwan.[10] Horai rice was expected to make the Philippines self-sufficient in rice by 1943, but rains during 1942 prevented this from happening.[11] 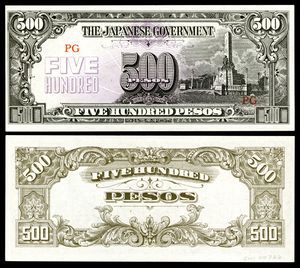 The first issue in 1942 consisted of denominations of 1, 5, 10 and 50 centavos and 1, 5, and 10 Pesos. The next year brought "replacement notes" of the 1, 5 and 10 Pesos while 1944 ushered in a 100 Peso note and soon after an inflationary 500 Pesos note. In 1945, the Japanese issued a 1,000 Pesos note. This set of new money, which was printed even before the war, became known in the Philippines as Mickey Mouse money due to its very low value caused by severe inflation. Anti-Japanese newspapers portrayed stories of going to the market laden with suitcases or "bayong" (native bags made of woven coconut or buri leaf strips) overflowing with the Japanese-issued bills.[3] In 1944, a box of matches cost more than 100 Mickey Mouse pesos.[12] In 1945, a kilogram of camote cost around 1000 Mickey Mouse pesos.[13] Inflation plagued the country with the devaluation of the Japanese money, evidenced by a 60% inflation experienced in January 1944.[14]

The Japanese allowed Tagalog be the national language of the Philippines.[15] To this end a pared-down, 1000 word version of the language was promoted to be learned rapidly by those not yet versed in the language.[16] Love for labor was encouraged, as seen by the massive labor recruitment programs by the KALIBAPI by mid-1943. Propagation of both Filipino and Japanese cultures were conducted. Schools were reopened, which had an overall number of 300,000 students at its peak.[17]

End of the Republic 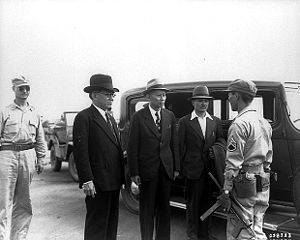 On September 21, 1944, Laurel put the Republic under Martial Law.[18] On September 23, 1944, the Republic officially declared war against the United States and United Kingdom.[19] Following the return of American-led Allied forces, the government of the Second Republic evacuated Manila to Baguio.[20] The republic was formally dissolved by Laurel in Tokyo on August 17, 1945.[20]