The second inauguration of Bill Clinton as the 42nd President of the United States, as well as the last inauguration of a president in the 20th century,[1] took place on January 20, 1997. 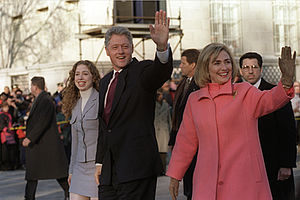 Reverend Billy Graham gave an invocation to start the ceremony followed by the Pledge of Allegiance. Associate Justice of the Supreme Court of the United States Ruth Bader Ginsburg gave the oath to office for Vice President Al Gore. Jessye Norman, the famed Georgian opera singer, then serenaded the crowd with a medley of patriotic songs. Following the performance, surrounded by members of Congress dignitaries, Justices of the Supreme Court, family, and friends, Bill Clinton stood next to his daughter while his wife held the Bible. The oath to office was administered by Chief Justice William Rehnquist[1] at 12:05 pm.[2] The oath was ended with the traditional words, “So help me God.” The National Anthem was sung and then Arkansas poet Miller Williams read “Of History and Hope,” a poem he wrote for the occasion. President Clinton's inaugural speech followed. The inauguration was celebrated that night by 14 different official galas held in honor of the President and First Lady.[1]

January 20, 1997 was also Martin Luther King, Jr. Day. The President's speech addressed Dr. King and his legacy as a champion of African-American rights and freedoms during the civil rights era. In addition, a meal was eaten after the oath was taken at the Capitol's Statutory Hall that was based on traditional recipes from President Thomas Jefferson's era.[1]

This was the first presidential inauguration to be streamed live on the internet.[3]

"Of History and Hope"

Miller Williams, a poet from Clinton's home state of Arkansas, penned the poem “Of History and Hope” especially for the day.

We have memorized America,
how it was born and who we have been and where.
In ceremonies and silence we say the words,
telling the stories, singing the old songs.
We like the places they take us. Mostly we do.
The great and all the anonymous dead are there.
We know the sound of all the sounds we brought.
The rich taste of it is on our tongues.
But where are we going to be, and why, and who?
The disenfranchised dead want to know.
We mean to be the people we meant to be,
to keep on going where we meant to go

But how do we fashion the future? Who can say how
except in the minds of those who will call it Now?
The children. The children. And how does our garden grow?
With waving hands -- oh, rarely in a row --
and flowering faces. And brambles, that we can no longer allow.

Who were many people coming together
cannot become one people falling apart.
Who dreamed for every child an even chance
cannot let luck alone turn doorknobs or not.
Whose law was never so much of the hand as the head
cannot let chaos make its way to the heart.
Who have seen learning struggle from teacher to child
cannot let ignorance spread itself like rot.
We know what we have done and what we have said,
and how we have grown, degree by slow degree,
believing ourselves toward all we have tried to become --
just and compassionate, equal, able, and free.

All this in the hands of children, eyes already set
on a land we never can visit -- it isn't there yet --
but looking through their eyes, we can see
what our long gift to them may come to be.
If we can truly remember, they will not forget."[4]