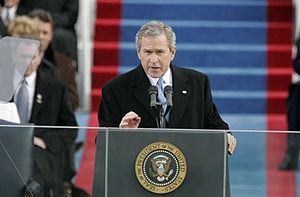 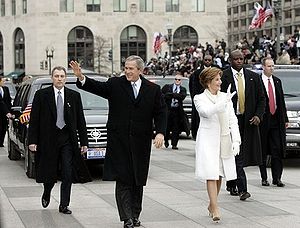 George and Laura Bush during the 2005 Inaugural Parade

The second inauguration of George W. Bush as the 43rd President of the United States took place on Thursday, January 20, 2005. The inauguration marked the beginning of the second term of George W. Bush as President and Dick Cheney as Vice President. Ailing Chief Justice William Rehnquist administered the Oath of office for the last time before his death in September 2005. Attendance at the inauguration has been reported as being around 100,000,[1] 300,000,[2] or 400,000.[3]

Bush's inaugural address, delivered in 21 minutes, centered on and expanded upon previous foreign policy remarks concerning the promotion of democracy around the world, as well as making human rights the guiding principle of US foreign policy.[4] According to William Safire, Bush had told his chief speechwriter, Michael Gerson, "I want this to be the freedom speech."[5]

America's vital interests and our deepest beliefs are now one. From the day of our Founding, we have proclaimed that every man and woman on this earth has rights, and dignity, and matchless value, because they bear the image of the Maker of Heaven and earth. Across the generations we have proclaimed the imperative of self-government, because no one is fit to be a master, and no one deserves to be a slave. Advancing these ideals is the mission that created our Nation. It is the honorable achievement of our fathers. Now it is the urgent requirement of our nation's security, and the calling of our time. So it is the policy of the United States to seek and support the growth of democratic movements and institutions in every nation and culture, with the ultimate goal of ending tyranny in our world.

Today, America speaks anew to the peoples of the world: All who live in tyranny and hopelessness can know: the United States will not ignore your oppression, or excuse your oppressors. When you stand for your liberty, we will stand with you. Democratic reformers facing repression, prison, or exile can know: America sees you for who you are: the future leaders of your free country.

During the parade there were some protests along the route, but these were after the address and supporters far outnumbered the protesters. President Bush and the First Lady, Laura Bush, left their bullet-proof limousine and actually walked some of the route.

As the first presidential inauguration after the September 11 attacks, security was tighter than previous ceremonies. The inaugural parade route as well as other related sites were guarded by 13,000 police and soldiers, in addition to aerial patrols by helicopter and fighter aircraft and rooftop sharpshooters. In downtown Washington, a 100 square block area was closed to traffic.[4]

Many protested at the ceremonies and five people were arrested during the inauguration ceremony.[6]