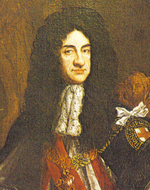 The Treaty of Dover, also known as the Secret Treaty of Dover, was a treaty between England and France signed at Dover on 1 June[1] 1670. It required France to assist England in the king's aim that it would rejoin the Roman Catholic Church and England to assist France in its war of conquest against the Dutch Republic. The Third Anglo-Dutch War was a direct consequence of this treaty. 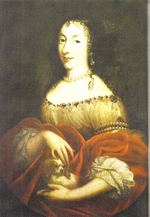 Henrietta, Charles II's youngest sister, assisted in the negotiations that led to the Secret Treaty of Dover (26 May 1670).[2]

Exactly who first proposed the alliance between the two kingdoms is unknown, as is the date when the possibility was first discussed. However, it is known that the two nations had discussed forming a closer relationship since 1663.[citation needed] The only participants in the talks to begin with were Louis XIV of France, Charles II of England, and Charles's sister Henrietta, duchesse d'Orléans.[citation needed] Louis was first cousin to Charles (through their grandfather Henry IV of France). Henrietta was also Louis's sister-in-law through her marriage to his only brother Phillippe, duc d'Orléans.

No real progress was made in the negotiations until 1669 after Charles allegedly held a meeting with some of his advisors.[citation needed] During this meeting Charles announced that he wished to officially convert to Catholicism and at the same time reunite his lands with the Roman Catholic Church.[citation needed] Whether this meeting actually took place is a source of intense speculation.[by whom?] Although much of the groundwork had been laid by Henrietta, the finer points and actual provisions of the treaty were hammered out by Henry Bennet, 1st Earl of Arlington and Sir Thomas Clifford.[citation needed]

Charles was to abandon England's Triple Alliance with Sweden and the Dutch Republic in favour of assisting Louis in conquering the Dutch Republic. Provided that the conquest was successfully completed, England was promised several very profitable ports along one of the major rivers that run through the Dutch Republic. In particular, the main components of the treaty were the following:

The secret treaty did not in fact become public until 1771 after the historian Sir John Dalrymple published its contents in his Memoirs of Great Britain and Ireland.[4]

The secret treaty, often known as The Treaty of Madame, because of the role Charles' sister played as intermediary in brokering it, was signed and sealed in June 1670. The Duke of Buckingham was then appointed to negotiate a treaty with the King of France. He was amazed by how smoothly it went. This treaty closely followed the secret treaty just concluded, but the clause by which King Charles was to declare himself a Roman Catholic as soon as the affairs of his kingdom permitted did not appear; neither, therefore, did the stipulation that the attack on the Netherlands would follow his declaration. This treaty was signed by all five members of the Cabal Ministry on 21 December 1670.[5]

Consequences of the Treaty of Dover

Military preparations took some time. Louis declared war on the Dutch on 6 April 1672, and Charles followed suit the next day, 27 March (Old Style). The Third Anglo-Dutch War failed to go off as originally planned. The costs of deploying the English fleet were much greater than expected, and the money sent by Louis to offset the costs did not come close to enough. Furthermore the Dutch, led by Captain-General William of Orange put up a much better fight than expected. Desperate for funds, Charles was forced to call Parliament into session for the first time in over two years. He had hoped to keep it prorogued in order to wage the war without its oversight. In 1674, largely because of pressure put upon Charles by Parliament, England signed the Treaty of Westminster ending their involvement in the third Anglo-Dutch War. The French would continue to fight for four more years before signing the Treaty of Nijmegen.

In 1672, Charles issued a Declaration of Indulgence which suspended the penal laws against nonconforming Protestants. This same declaration also relaxed (but did not suspend) the penal laws applying to Roman Catholics. When Parliament reconvened that year they denounced the Declaration and announced that the English monarch did not possess the power to issue proclamations that suspended penal laws passed by the Parliament. Furthermore they refused to fund the ongoing Third Anglo-Dutch War until the declaration was withdrawn. Charles was forced to comply with Parliament's demands, thereby ending the chance offered by the treaty of reconciling England with the Roman Catholic Church.