Secret police (sometimes called political police) are intelligence services or police and law enforcement agencies which operate in secrecy, and therefore have little to no transparency, accountability or oversight. An alternative name is secret service. A secret police organization is often used beyond the law by totalitarian states to protect the political power of an individual dictator or an authoritarian (autocratic) political regime.

Instead of transparently enforcing the rule of law and being subject to public scrutiny as ordinary police agencies do, secret police organizations are specifically intended to operate beyond and above the law in order to suppress political dissent through clandestine acts of terror and intimidation (such as kidnapping, coercive interrogation, torture, internal exile, forced disappearance, and assassination) targeted against political enemies of the ruling authority.

Secret police forces are accountable only to the executive branch of the government, sometimes only to a dictator.[citation needed] They operate entirely or partially in secrecy, that is, most or all of their operations are obscure and hidden from the general public and government except for the topmost executive officials. This semi-official capacity allows the secret police to bolster the government's control over their citizens while also allowing the government to deny prior knowledge of any violations of civil liberties.

Secret police agencies have often been used as an instrument of political repression.

States where the secret police wield significant power are sometimes referred to as police states or counterintelligence states. In theory, secret police differ from the domestic security agencies in modern liberal democracies, because domestic security agencies are generally subject to government regulation, reporting requirements, and other accountability measures.

Despite such overview, there still exists the possibility of domestic-security agencies acting unlawfully and taking on some characteristics of secret police. In some cases, certain police agencies are accused of being secret police and deny being such. For example, political groups[1] and civil liberties organizations[2] in the United States have at various times accused the Federal Bureau of Investigation of being secret police.

Which government agencies may be classed or characterized, in whole or part, as "secret police" is disputed by political scientists.

Secret police organizations can exist at sub-national levels in a political unit in which entrenched leadership is largely unaccountable. The Mississippi Sovereignty Commission, an agency with the responsibility to enforce segregation and resist all challenges to it in the American state of Mississippi. It manipulated the news media, harassed opponents of segregation, coordinated with terrorist groups, and manipulated the judicial system to defend those who committed violent crimes (even murder) against those who challenged the racist order.[3]

A single secret service has the weapons to arrogate to itself complete political power. It may therefore pose a potential threat to the central political authority.

In dictatorships, a close relative of the dictator often heads the secret police. For example, Saddam Hussein, as head of the State Internal Security Department placed his secret police under the authority of his first cousin Ali Hassan al-Majid.

In addition, secret police have a strong tendency to view potential political enemies as concrete threats, even if they do not exist. In some cases, a dictator may manufacture such enemies for the purpose of directing national output toward a common goal, thereby supplying an image of national unity. 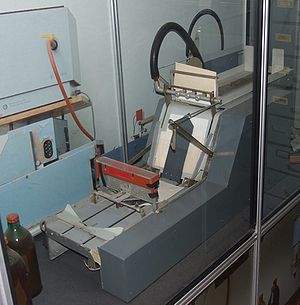 An automated Stasi machine used to re-glue envelopes after mail had been opened for examination.

Secret police not only have the traditional police authority to arrest and detain, but in some cases they are given unsupervised control of the length of (imprisonment)|detention]], assigned to implement punishments independent of the public judiciary, and allowed to administer those punishments without external review. The tactics of investigation and intimidation used by secret police enable them to accrue so much power that they usually operate with little or no practical restraint.

Secret-police organizations employ internal spies and civilian informants to find protest leaders or dissidents, and they may also employ agents provocateurs to incite political opponents to perform illegal acts against the government, whereupon such opponents may be arrested. Secret police may open mail, tap telephone lines, use various techniques to trick, blackmail, or coerce relatives or friends of a suspect into providing information.

Secret police are notorious for raiding homes between midnight and dawn, to apprehend people suspected of dissent.[4]

People apprehended by the secret police are often arbitrarily arrested and detained without due process. While in detention, arrestees may be tortured or subjected to inhumane treatment. Suspects may not receive a public trial, and instead may be convicted in a kangaroo court-style show trial, or by a secret tribunal. Secret police known to have used these approaches in history include the secret police of East Germany (the Ministry for State Security or Stasi) and Portuguese PIDE.[5]

Secret police have been used by many types of governments. Secret police forces in dictatorships and totalitarian states usually use violence and acts of terror to suppress political opposition and dissent, and may use death squads to carry out assassinations and "disappearances". In times of emergency or war, a democracy may lawfully grant its policing and security agencies additional or sweeping powers, which may result in those agencies being seen or construed as a secret police.